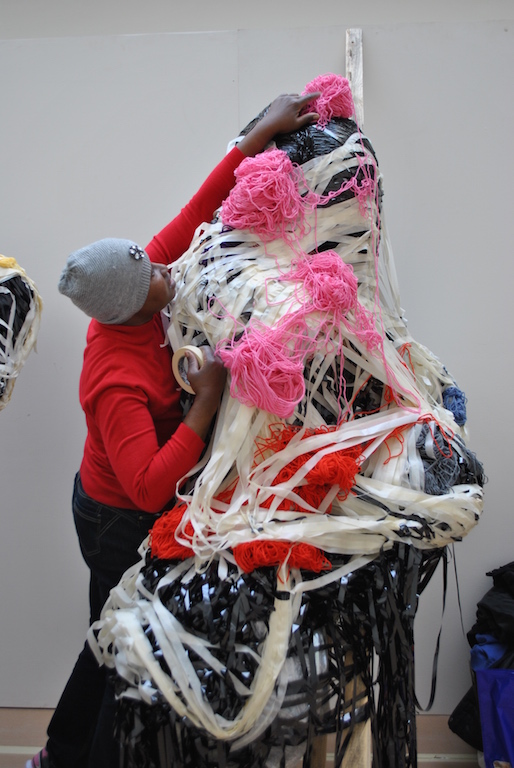 In March this year ActionSpace artist Nnena Kalu was invited to take part in a four way residency with the Mad Museé in Belgium. She travelled over with ActionSpace facilitator Charlotte Hollinshead to spend one week creating a large-scale installation. Here Charlotte tells us about the residency and the outcomes.

After arriving in Liege, fresh from the Eurostar Nnena met the other Capharnau’ exhibiting artists Hendrick Heffnick, Pascal Tassini and Selbermann in the Mad café, Liège. It was a wonderful introduction to the project, artists, facilitators and the Mad Museé team and we shared our first evening meal together. We discussed the practice of the selected artists and initial ideas for the four site-specific installations, which would make up the exhibition.

There was a great sense of excitement on the first day installing, with everyone eager to make the most of this wonderful opportunity. Pierre and Stephanie from Mad Museé showed Nnena around the space. The room had been divided into quarters with paneled walls and each artist was allocated their own quarter space. Nnena’s space faced the entrance alongside Hendricks, with Pascal and Selbermann situated behind her. Hendrick had already constructed a large frame, which he said was the start of his house. His determination to establish his space was inspiring for Nnena who immediately began sorting through the materials we had requested: tubing, plastic sheeting, videotapes, wool and tapes. Nnena works systematically using materials in a certain order, so this initial sorting was essential to help her decide her process. Nnena used her wrapped ball-like forms created in the ActionSpace Clapham studio as the starting point for her installation. As a continuation of this recent work, Nnena went straight for the plastic sheeting, ripping and tearing the large sheets into smaller manageable pieces. Then she began the process of bundling then binding small clusters of plastic together with cling film to create uneven ball forms. Nnena and Hendricks’ spaces on day 1

Once Nnena had created several ball forms I supported her to create a home for them. In previous installations Nnena has built her work upon simple structures, which provide an anchor for her forms and the opportunity for the work to grow as much as Nnena needs it to. She experimented with multiple wooden frames in her space, propping them against the wall. She settled a frame in the corner, we secured it and Nnena immediately began to attach her first batch of plastic forms on top. She then quickly settled into a methodical way of working, creating one ball at a time then attaching it with cling film onto the growing mass around the frame. In response to Nnena’s way of working we constructed a series of four more support frames at intervals across her space – her work was clearly growing and she needed the opportunity to branch out. Through the first day Nnena focused entirely on building up the first frame. Both the individual forms she created and the sculptural form on the first frame grew immensely through the day. Nnena incorporated videotape into the binding process, which transformed the look and feel of the work creating a bold black and white contrast. It was a really successful start to the installation. After having so many new things to take in Nnena was incredibly relaxed and happy in the space and already determined to work big. She was clearly feeling ambitious from the beginning. On the second day Nnena shifted her focus onto two more frames. She had picked up speed, working with total confidence. Her individual forms continued to grow larger, more plastic materials arrived during the afternoon and Nnena’s eyes lit up. I filmed and photographed as much as possible to capture as many of the wonderful evolving moments Nnena created during the process of making. Shapes, forms and lines endlessly shifted as Nnena layered and bound more materials together. Beautiful moments became lost, then others emerged as another layer was applied, transforming the sculptural forms entirely. A Belgium film crew filmed Nnena working; she seemed to find this rather amusing and smiled a lot whilst working.

New materials were added to the process, which had grown from just bundling and binding with cling film to then attaching with videotape, scattering wool then rebinding everything together with masking tape. Like a special Nnena recipe she worked in this order over an intense six-day stretch to create her forms across each of the five frames. Once each frame had been substantially built up she worked across them all in turn adding new layers and rebinding sections. Each sculpture was constantly changing with every new application of material. The speed of development and scale of the work was incredible. Part of the final work

There was a focused energy in the room on the last day as each of the artists finalised their installations ready for the opening night. Nnena did a beautiful job adding the final touches to her work before visiting Pascal and Selbermann in their spaces. She took Pascal her scissors (which he had previously ‘borrowed’) and she gave them to him as a gift. He was very pleased and was keen to welcome Nnena into his fabric house, shake her hand and pose for photos. The opening night was a fantastic chance to celebrate everyone’s hard work and the success of the exhibition. Nnena celebrated in style singing a selection of her favourite Abba songs with a glass of wine. Transforming a substantial space in the Theatre de Liege in her own unique way enabled Nnena to explore her practice on a much larger scale rarely realised. The installation she created was intense, beautiful and truly compelling. Nnena loved the space, loved the freedom it offered and thrived in the focused creative environment. Working alongside like-minded lovely people, the Mad Museé team, the three other artists and their facilitators was an inspiring experience for both of us. I felt privileged to support Nnena in developing such a significant piece of work alongside our European friends.