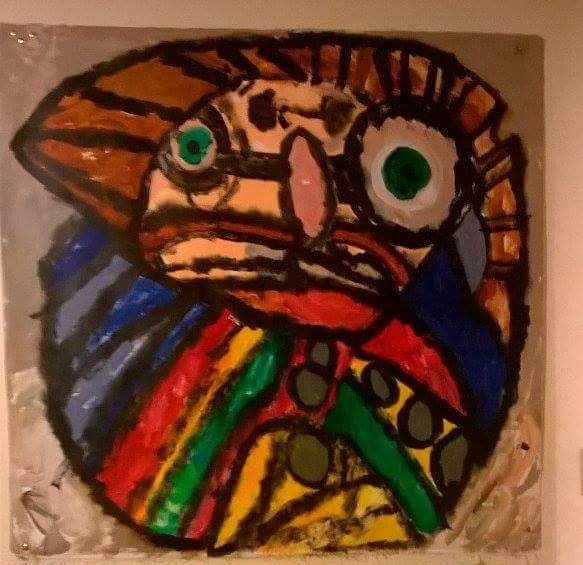 On Tuesday 18 September 2016, Outside In Manager Jennifer Gilbert attended the OutsiderXchanges symposium at BALTIC entitled ‘Collaboration in Practice’, and here she reports on what was shared and discussed at the event.

‘The symposium was kicked off by the tall, friendly Horace Lindezey from Venture Arts* who welcomed us all. This set the tone for the day that the voice of artists with learning disabilities would be heard throughout.

Horace Lindezey, Amanda Sutton and a cardboard cut out of Rudolph Walker

OutsiderXchanges was the brainchild of Venture Arts Director Amanda Sutton and it has been two years in the making between Venture Arts, Castlefield Gallery and BALTIC. The project came about to enable the work of learning disabled artists to take its seat in the wider visual arts world arena and to show that collaborative practice can take on many varying forms when created on an equal footing. Amanda stated that the projects aims were:

Twelve artists with and without disabilities worked in studios in Manchester and Newcastle for a period of six months – meeting one day a week. In Manchester, Castlefield Gallery provided a pop-up studio space to be used and provided support throughout the process. (Kwong Lee from Castlefield Gallery was quick to point out that they did not enter the process in a tokenistic way, but to add value to what both organisations already do.) Artist Tanya Raabe-Webber was also on hand to provide artistic support and to help develop the project every two weeks – she also took part in the live drawing on the day of the symposium (see photograph). Tanya said of the project that it was about ‘human beings connecting with human beings.’

The name for the collaboration was chosen as a play on the term Outsider Art. The learning disabled artists were on the inside, with the outsider, emerging contemporary artists being invited in to their space. What happened, according to Amanda, was lots of ‘authentic work,’ which she said is not always apparent within the contemporary art world. The artists also started to advocate more for them and their art and this was apparent to Amanda and others at the launch of the work at the Manchester Contemporary Art Fair last month.

Leslie Thompson’s work in the exhibition

The artists involved from Venture Arts were selected on their motivation and their want for independent study, whereas the contemporary artists submitted proposals and were interviewed, with Venture Arts artists being allowed to give their opinions on who should and shouldn’t be included. I posed the question to the contemporary artists about why they wanted to be involved. One answered honestly and said he wanted the studio space, but was quick to state that the six months had seen him grow and made him realise that the collaboration was so much more than he expected it to be. Many of the others stated it had changed their outlook on life and their artistic process, taken them out of their comfort zones, and they shared how it had changed their view of disabled artists. One said, ‘We helped each other to clear up our own chaos!’

The collaboration was not about mentor and mentee, but everything done on an equal footing. Quite often the artists might have worked parallel to each other and not necessarily on collaborative pieces, but dialogues continued throughout about their art and their practices. (Some of the resulting work can be seen in an exhibition currently at BALTIC until 31 October 2016).

The morning session of the symposium saw us watch films created by the artists, hear a musical performance (by newly formed Psychedelic Braincells) and watch a film created by Venture Arts where we individually heard from each person involved in the collaborative processes. After lunch we heard from several speakers working in varying collaborative ways with artists with disabilities…

First up was Charlotte Hollinshead, a facilitator with ActionSpace in London, who very much focus on the individual and their supported journeys. Charlotte highlighted three separate collaborations for artists that she works with, but mentioned that the artists had very clear ideas and that it was others taking part collaboratively that made the work richer or come to life. She finished by saying ‘the process is essential’ for all the artists that she works with.

Next was Elisabeth Gibson, Director of Project Ability in Glagsow, who again focused on several examples of artists with disabilities collaborating in residencies, the creation of new work or learning new skills with contemporary or emerging artists. One example was Cameron Morgan learning a new skill (slip-casting) for his recent body of work for Unlimited Festival in Glasgow.

Newly appointed Director of The ArtHouse Wakefield Shan Edwards told us about her manifesto for taking The ArtHouse forward in its new direction and how she wants to diversify how they work and the organisations that they work with. Collaboration will play a large part of this.

Horace Lindezey’s map around where he lives and remembers

Ruth Gould, Director of Dadafest, gave us a brief history of disability arts and the role it plays today. She firmly believes that disability arts is a vehicle to change perceptions in this world, but is keen for more critical reviews within this field of art.

Gus Garside finished the day talking about Creative Minds, a project and continuing discussion that is led by artists with learning disabilities, and the plan for the next Creative Minds conference to be in Manchester in June 2017 with Venture Arts as the lead organisation.

At the end we saw the live drawing that had been happening throughout the afternoon by Tanya Raabe-Webber and artists from Venture Arts – a mini story-telling board!

The live drawing from the end of the symposium

It was an inspiring day with food for thought, but I wish that time had been left at the end to ask further questions to the afternoons speakers and to discuss how we could move forward and create more collaborative opportunities across the UK for artists with and without disabilities.’

*Venture Arts is a Manchester based organisation that works to progress the careers of learning disabled artists.