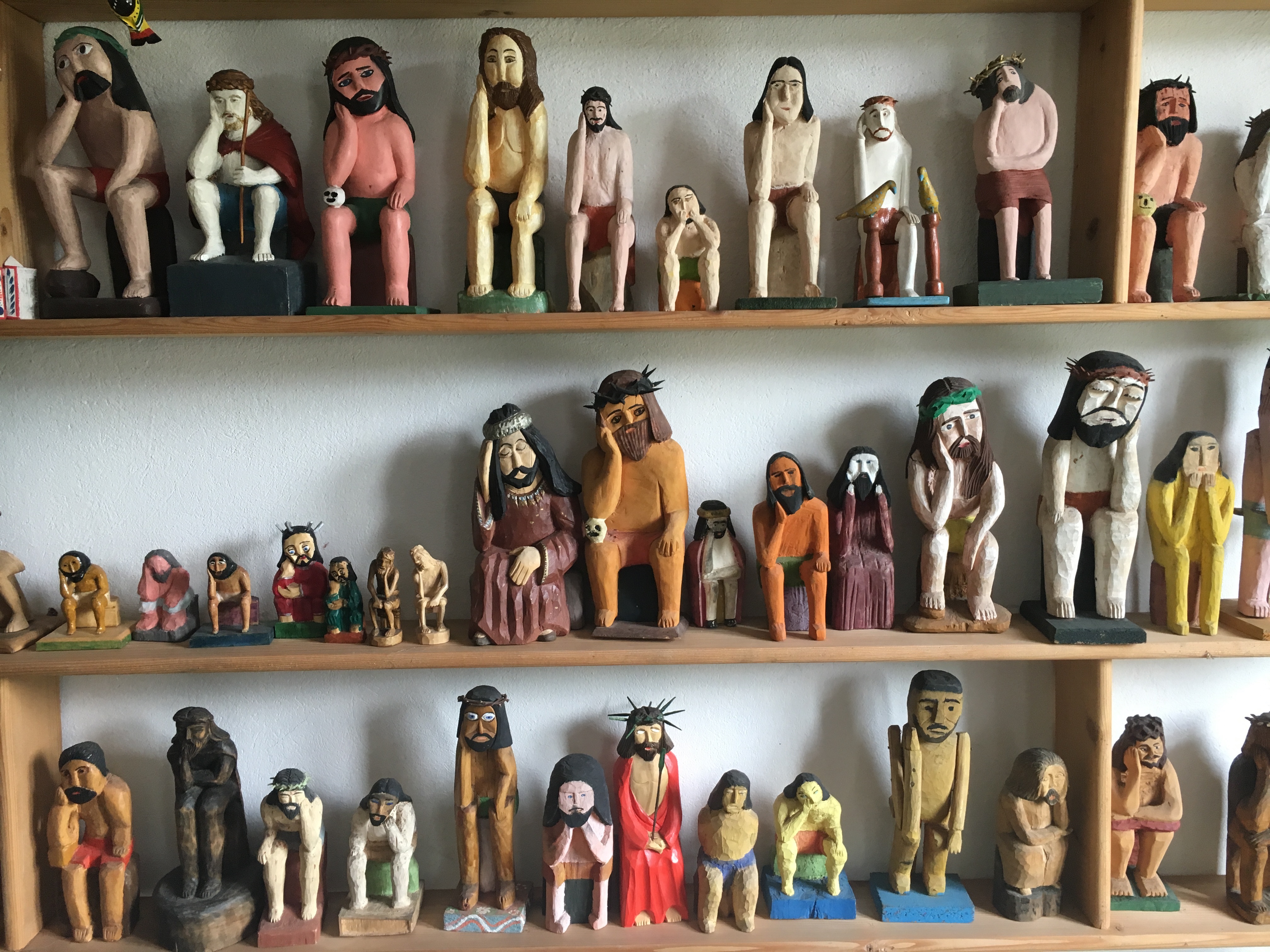 On 11 and 12 June Outside In Founder Marc Steene took part in the 2016 European Outsider Art (EOA) conference in Poland. As well as the conference there were tours organised to visit two sites in the area around Krakow, and here he comments on his trip.

“The first stop was the Parish Museum in Paszyn, a museum seemingly lost in time and well off the beaten track. Paszyn was a village that had suffered much deprivation in the past and the villagers from malnutrition. The museum and collection were started by the priest of Paszyn, Father Edward Nitka. As the story goes the priest was offered a naïve carving of Our Lady by Wojciech Oleksy, a non-verbal deaf resident of the village. The villagers thought the carving clumsy and crude and inappropriate, but the priest was touched by the work and its intention and challenged the other villagers to produce something themselves. The rest is history as they say and the collection, started in 1957, of folk art and naïve carvings of religious figures and traditional glass painting, now amounts to around 3000 works. There is a quiet serenity to the museum and the many carvings, some wonderfully crude, convey a strong sense of simple but heartfelt belief. Father Nitka’s conviction that a piece of art made with love, but seemingly ugly, could be respected and not seen as blasphemous was a major challenge to current religious practice and aesthetics. The second visit was to the painted village of Zalipie. Zalipie is remarkable for the many houses painted with flowers, a tradition which continues as a yearly competition which takes place at the weekend after Corpus Christi. The conference itself was held at the Museum Śląskie in Katowice, a remarkable museum housed in a converted coal mine in the Silesian region of Poland. The theme of the conferences was collections and collectors. Thomas Roeske, the Director of the Prinzhorn Museum and the President of the EOA, spoke on ‘Collecting after Prinzhorn’. His talk focussed on how the collection has moved from its original premise of the ‘art of the mentally ill’ to collecting work, not just by patients, but by people who use art as therapy and as a means of saving life. A different perspective on collecting and collections was given by Marianne Springham from the UK who has worked closely with the artist Robert Woods and his family for many years. Robert is an obsessive maker of art and his family home the repository for his works. His art collection acts as an archive of his memories, of places he has visited and keep-sakes. The question as to what should happen with his collection in the future is unresolved, but poses an ongoing question as to how best to share and conserve work by non-traditional makers. Peter Kinny from Inuit, a studio group based in Stockholm, explained the issues that his organisation faced when collecting and selling works by their artists. They are cautious about the commercial art market and keep the best works for their own collection. Aleksandra Oberg, an artist from Inuit gave the most engaging presentation of the day sharing her wonderful stop frame animation of a McFly song acquired for their collection.

EOA conferences always bring a particular focus on the diverse area of outsider, folk or non-professional art, the speakers and delegates provide an opportunity for rich conversations and the chance to form new networks. The next conference will be held in May 2017 at the Gaia Museum of Outsider Art in Denmark, If you would like to join the EOA or find out more visit: www.outsiderartassociation.eu/“