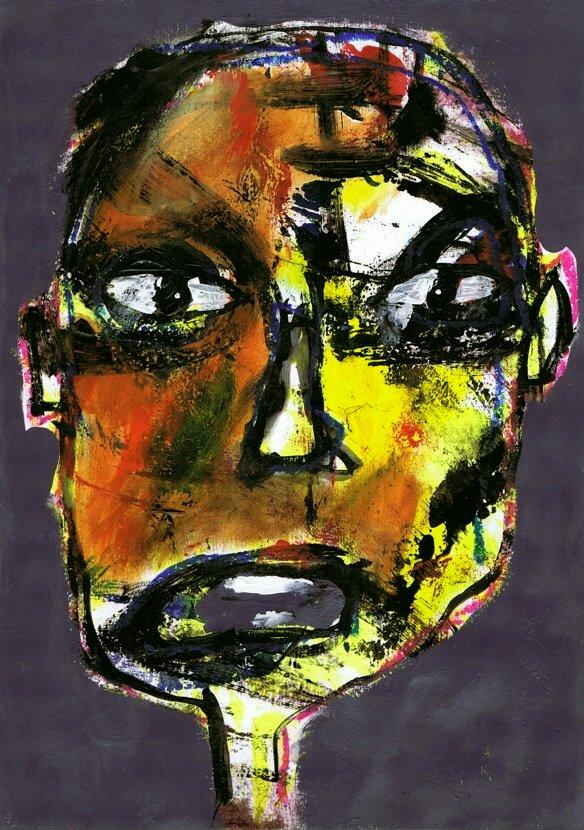 Outside In asked artist Carlo Keshishian to write about his experience of the Outsider Art Fair in Paris that took place just two weeks ago. Here is his response…

‘It has been difficult deciding where to start, and so, I shall start with why. Why has it been difficult? This year’s Paris fair, for me, was abundant with interesting work. In contrast to my reflections on last year, which I felt was not so consistent, I found the fair this year to be better laid out and to consist of a higher calibre of work overall, with intriguing artists I wasn’t aware of and quality examples from familiar and historical artists.

Gaël Dufrene alongside his wondrous works

A pleasant surprise came in the form of works by Gaël Dufrene, which caught my eye from a distance and absorbed me into a less visible corner of the fair. The fairly large drawing appeared to be a detailed account of a motor contraption, meticulously drawn by hand, but not in a way that seems particularly cerebral. I loved the detail in the work, but also the care and attention taken to depict all the wires and positioning made me feel something else. I sensed the love that went into making the drawing and in getting these details down. There was also a playfulness to it, later triggering a connection in my mind, with the expressway drawings of Wesley Willis.

The mysterious woodwork of Franz Huemer

Other personal discoveries include the curious works of Franz Huemer, to whom a special curated space was dedicated. The room contained several mystical wooden sculptures, branches of tree in their natural form, some almost entirely painted, others only marginally modified with just a few marks to highlight areas resembling human or animal-like features. Also interesting were works by Bernard Guillot at the Galerie Frédéric Moisan booth. The gallery was consistent with the artists they showed but this one drew me in and I appreciated what was like a converging of Fred Ressler’s serendipitous photographs and Christine Sefolosha’s similarly happenstance forms through painting. In some of his pieces, Guillot appears to paint onto photographs, creating an interesting atmosphere. I was impressed by a book Mr.Moisan showed me, documenting through photography, thirty years that Bernard Guillot spent living at a hotel in Cairo. The book contains stunning photographs, with an otherworldly quality to them.

The unparalleled work of Edmund Monsiel

In terms of the familiar, I shall begin with the most familiar (though this is debatable on some levels), myself. Three of my drawings were shown with Galerie Du Marché who again included me among a highly potent array of Art Brut masters such as Aloise and Wolfli. If I could go home with any art work in the fair, it would without a doubt be the Edmund Monsiel drawing at our booth here. His drawings never cease to amaze me. Another from the ABCD collection was on show as part of the specially curated booth ‘Self Portrait With My Neuroses’. Incidentally, ABCD purchased one of my drawings during the fair. Back at the Galerie Du Marché, Carlo Zinelli was inevitably my accomplice to surreal moments once again. On this occasion, I was being introduced to an individual while he was observing a Zinelli art work, “This is Carlo” was said, and he turned to shake my hand with a look of momentary confusion on his face (Zinelli having been dead for over forty years). I told him not to worry about it and that I’d experienced a similar confusion almost fifteen years ago when I first came across Carlo Zinelli’s work. I was in a second hand bookshop, perusing the art books when bold white words ‘Art Brut’ against a thick black spine popped out at me. I looked through this book, written by Michel Thévoz, and stopped at an image of several human-like figures with holes in their heads. I loved the image, but initially I was intrigued due to the similarity with figures I’d been drawing with holes in their heads. When I went to see the name of the artist, at a time when ‘Zinelli’ was not known or included, the description simply said ‘Carlo’. I had to buy the book. Another tidbit: In the last couple of years, word has it that Thévoz has seen my drawings first hand and found them interesting. To return to the fair, I should mention several Carlo Zinelli works being shown with a few galleries, which I found overall to be more interesting than those I saw last year. Unusual to see, two Augustin Lesage paintings were on show, one with Galerie Les Yeux Fertiles from Paris. A few years ago, I visited their gallery and saw what I consider to be a master work by Ody Saban, a tall and wonderful drawing. Several Ody drawings were on show at the Galerie Claire Corcia, including some interesting smaller black and white drawings, but a piece that particularly struck me, which was bursting with colour, had me returning several times.

A sophisticated magnifying glass with built-in light, being used to look at a detailed Carlo Keshishian diary drawing. Works by Aloise and Wolfli visible in background

To see a wall of Albert drawings courtesy of England & Co. was admirable. I fondly remember photographing his works at the Bethlem Gallery four or five years ago for Outside In’s website and have seen his success flourish and admirers grow. His imagery is very potent and has been looking fantastic in all the settings I’ve recently seen his drawings in. It was also good to see the man himself at Outside In’s 10th anniversary last month.

The spectrum of sex, death, war, other worlds and psychosis have again been successfully catered for. Notable mentions go to the weaponry of Robiard, of which the Galerie Du Marché presented a rare early example, the devastating works of Mark Hogancamp (featured in current issue of Raw Vision magazine) as shown by One Mile Gallery, Cavin Morris brought an intriguing collection of works by Gregory Van Maanen as well as some incredible pieces by Ghyslaine Et Sylvain Staelens. I was also quite taken by a Susan Te Kahurangi King drawing courtesy of Andrew Edlin Gallery, as well as some of the Friedrich Schroder-Sorrenstern works that several galleries were showing. Galerie Toxic had an all round strong booth, my highlight being a great wall of Cathy Ward works giving off a very particular energy, and a development on the style I am more familiar with seeing from her, steered into an enlightening and refreshing new netherworld.

A few months ago, I was in awe of Gil Batle’s elaborately bas relieved ostrich eggs, after having seen images featured in Raw Vision magazine. New York’s Ricco/Maresca Gallery dedicated their entire space to these magnificent eggs, each depicting a story, meticulously carved by the artist.

It would not be difficult for me to continue listing all the artists I found interesting, and who knows what else I would have discovered had I not been overwhelmed to the point of reaching my threshold, no longer being able to adequately absorb. One cannot go beyond the beyond. I hope you can glean something from my recap. It was also great to cross paths with artists I’ve known, others only through circuitry, and to meet all the people I have met. I must thank Outside In for the friendship, Philippe Eternod and Jean-David Mermod for being so passionate about the work, and lastly, a big shout out to Doctor Donuts!’