I have no formal art training, but artistically, I suppose I began some 50 years when a student taking photographs to support my degree in planning. I have been clicking away ever since. I now have an archive of perhaps 10,000 images. About 15 years ago I began to experiment with manipulating some of these photographs in the computer. I was keen to create new images that could not exist in any other way and I am still experimenting in that way.

About 10 years ago I had the chance to look around an artist print studio, observing the process of making linocuts and other more traditional print forms. I was hooked and within days I had enrolled on a course. I’m now entering my 10th year of study, still learning and still experimenting.

A constant element in all my work is the idea of palimpsest or layering. I was always interested in the way the urban and rural landscape built up over time so it was inevitable I suppose that this carried over into my art.

“A palimpsest is a manuscript that has been re-used by writing over the original writing, often at right angles to it, and sometimes more than once. Frequently it’s impossible to say which layer was first inscribed; and in any case any ‘development’ “¦ from layer to layer would be sheer accident. The connections between layers are not sequential in time but juxtapositional in space. Letters of layer B might blot out letters in layer A, or vice versa, or might leave blank areas with no markings at all, but one cannot say that layer A ‘developed’ into layer B (we’re not even sure which came first). And yet the juxtapositions may not be purely ‘random’ or ‘meaningless.”¦ Juxtaposition, superimposition, and complex patterning thus produce a malleable unity” (Hakim Bey http://hermetic.com/bey/palimpsest.html)

I am now extending this idea by combining different print media in one image. My screen print “Tree of Life” for example, uses manipulated photographs as the basis for a series of screen print stencils, building the image up in layers. Other work uses multiple collagraph plates. The image is often built up in thin glazes of ink, sometimes over only part of the plate. Some variations of the image have required ten or more impressions. I have also printed digitally over screen prints, digitally manipulated pastel sketches and used these to make stencils for screen printing over monoprints and used digital images to make etched plates in a process called solar etching. Because of this each image in an edition will often show variations in colour and configuration, sometimes obviously so, but often in more subtle ways.

When I work I don’t often conceive the image as a coherent whole from the outset. I have the germ of an idea, then it grows in front of me, whether physically or on the computer screen through a process of accumulation and accretion. Each intervention in the piece, each mark, each dab of ink on the plate, each stroke of the pen has to be made so as to build on what has happened so far and enrich it. 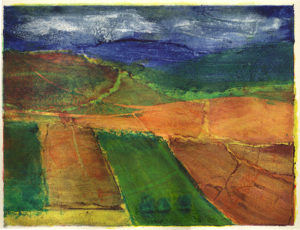 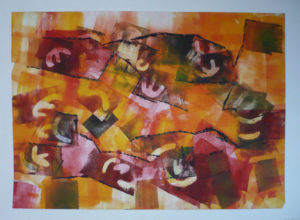 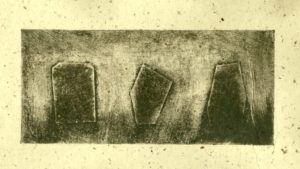 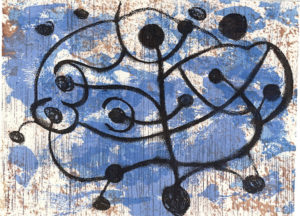