Karin van der Plas:
“¢ Was born in The Netherlands in 1968
“¢ Has been an artist for over 20 years.
“¢ She lived in New Zealand and Australia where she was inspired by Maori and Aboriginal art, which sparked her creative interests, after studying and practising social work for many years.
“¢ Having been influenced by tribal art, a combination of literary, cultural and historical events as well as every day observations Karin aims to transfer her passion and interests of these themes on to the canvas
By using bright colours, dramatic movement and elaborate compositions including mixed media collage she has developed her own style.
She is mostly self taught and has now lived and worked in London for the last seven years
“¢ When she not in her studio in Acton London she visits exhibitions and places of interest relevant to the subjects she is painting about. 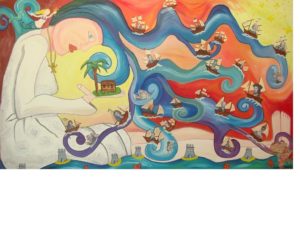 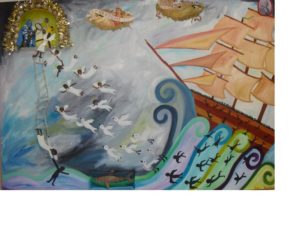