I was born in Cleethorpes, Lincolnshire, UK in 1967. I worked as a plant breeder/laboratory technician for 14 years before a change in career to follow my childhood dream of film-making. I have worked as a cinematographer, director of lighting, editor, composer, scriptwriter, special effects technician, producer and director.

Forming MoonCloud Productions in 1999, I made several short films and music videos. 2003 saw me experiment with animation and roto-scoping resulting in two films shown at the Meniscus Film Festival, A Devil’s Heaven (a collaboration with Japanese artist Ankoku Koubou Maki), and the competition entry, Atmosphere, both in 2002. I also made the United Nations music video Crazy World for singer Andrea Meadows in 2004.

Illness saw me withdraw from film production until 2009 when, working for WeKnowMe Productions and Patchwork Pictures, I made 12 music videos and short animated films; Storyboard: Robert A. Heinlein’s Starship Troopers, Black Bikini and Black Bava Sabbath are among my more notable works. My last effort for French Composer Josue Pelissier was the short film Origins.

Unfortunately the pressures of production resulted in my having to again withdraw from all film work and put my fragile health first.

In place of animation and production work, in 2010 I began to experiment with canvas and digital painting as a means to keep creatively occupied without the stresses or pressures of my chosen career. This work has resulted in The Dreaming Fly series of abstract paintings – which were exhibited in Kingston Upon Hull, UK in 2011.

I have debilitating and soul destroying mental health issues, struggling with chronic mixed depression and stress type F33.11. I am also living with Asperger’s Syndrome. My art has been an absolute lifeline and in my darkest hours has kept me sane and been a constant source of joy as I am able to express myself through my art, something I struggle to do in person. 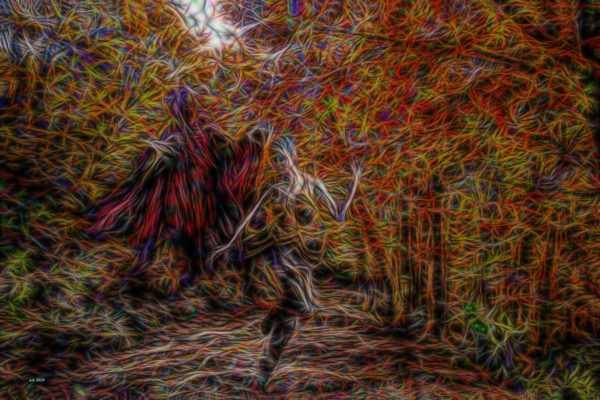