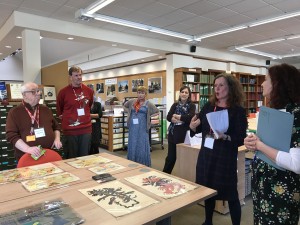 Monday 29 April saw a special event held at West Sussex Records Office by the Vawdrey Archive Project team.
The artists, archivist and project lead were joined by Outside In staff and guests including Dr Vawdrey’s son Alan, Solomon Szekir-Papasavva from the Wellcome Collection and Dr Thomas Röske, director of the Prinzhorn Collection.

Rachel Johnston, project consultation co-ordinator, began with an overview of the work so far which was followed by a discussion of some of the challenges that had been faced as the group work through the ethical and legal issues surrounding archiving the collection of nearly 200 pieces of patient created artwork.

An example of which, that proved the basis of the next task for the group, was working to write the archive descriptions and keywords for each artwork. This was done by filling in sheets which will then inform the record-makers and form part of the project archive itself.

The artists then showed their creative responses to the research which illustrated their own emotional, contextual and symbolic readings of the collection. To conclude, Dr Röske presented a talk covering his work at Prinzhorn, the history of ‘Art Brut’ and why projects such as the Vawdrey Archive play an important role in moving such terms forward.

Click here for more on the Vawdrey Archive Project