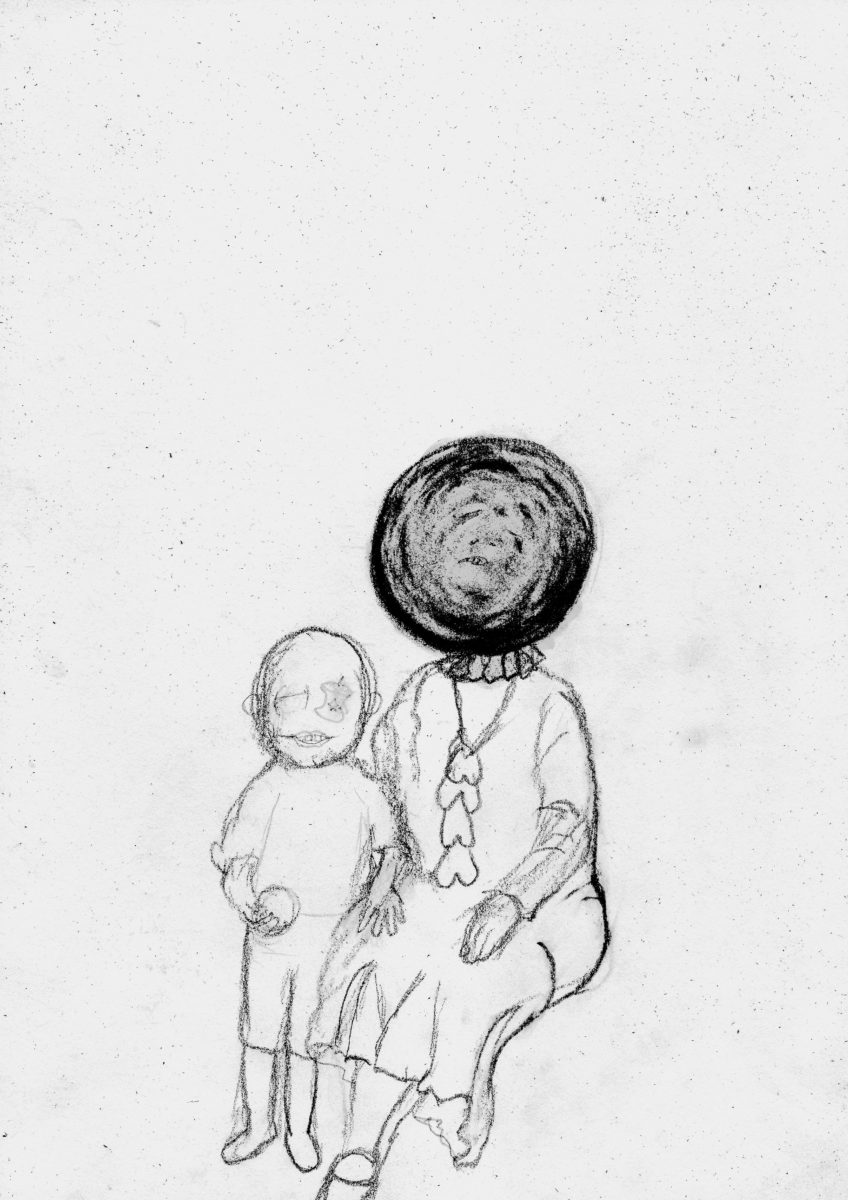 For August’s Artist of the Month feature we meet artist and inspiration source Cloud Parliament who uses their artwork as a means of translating what they see.

Why did you start making art?

I always have and mostly in secret. Since childhood I’ve seen shapes dancing — pulsing — geometric shapes, marks, symbols against what looks like a rough-hewn surface (rock?) and 3D primary-coloured geometrical shapes set on a rotating dais in brilliant light. And images loom up out of a darkness, I know they’re coming because there’s an eye watching me when I close my eyes, a different eye, just the one, not necessarily human. It’s like a messenger or a marker. Then the surprise is what image appears. Usually static, already formed and sometimes in bright colours, sometimes in filigree black and white (eg an enormous Shakespeare’s head with his Elizabethan collar bearing fairground waltzer cars crammed with people). Then I have to draw it. They do test my abilities with complex things. I tried just writing down what I saw but it feels like a poor translation, the essence doesn’t come through at all.

How would you describe your work?

I don’t know, I really don’t know how I’d describe them. They’re all part of a world, part of a piece with different manifestations. The interconnections become apparent the more I’m given, the more I draw.

Can you tell us how Cloud Parliament came about?

It’s been showing me bits and bobs for a very long time. At it’s core is a fortress of memory, a kind of plant/stone/ice fusion built on an iron-age burial mound/barrow surrounded by a great moat. The moat, despite being a moat, manifests temporary causeways which you can cross to reach the fortress. The moat is filled with troubadours, a kind of water-hatched singer whose larval state pupa case becomes the coracle in which they punt around the moat for the rest of their lives, singing. They are part of one perpetual choir (there are three). Their enemy/predator are sirens — a kind of bird — a-verbal, arhythmic noise makers that disrupt the pattern of the songs. The moat has currents created by the troubadours punting and their singing. The Fortress of Memory contains false memories as well as true ones and is so packed that the building is solid. It dissipates and vanishes after one year and has to be recreated by the hermetical Re-rememberers who live in enormous old, broken iron bells embedded on the hillside. Sometimes, one of the Re-rememberers will introduce something into the structure of the fortress (or its contents) that wasn’t there previously.

Tethered to the Fortress is a massive thundercloud worked into the semblance of the Houses of Parliament by Cloud Masons (they have special hammers but, since this world has its comedic moments, the Cloud Masons sometimes work clouds the way a clown will work those modelling balloons). The Cloud Parliamentarians are ghosts, they wear clothes cut from ectoplasm (mediums are stored and stacked like bolts of cloth for that purpose). There’s exactly the same number of Cloud Parliamentarians as there are citizens — each citizen has their own representative. Few babies are born there. The Map Battalion are forever firing inappropriate maps at places and reducing and changing the area and all living things are diminished to either early foetus-hood (frozen to prevent the usual heat of compression)or to sperm and egg, pollen and so forth. Laws are literally rained down. There are necropolises where the Cloud Parliamentarians have to lie on their mortal remains for a week every year as proof of their right to be lawmakers. If any limbs were amputated during life these limbs operate as a work-party (like a council’s direct works) and go about mending and building — they look like a cartoon fight, a cloud with limbs stuck out. The Cloud Parliament Seelie (of Fair Elphame), when not riding on plumbing (they’re obsessed with how water is controlled) convert people’s ear canals into their travel highways. The affected people believe they have tinnitus but it’s simply the daily Seelie rush-hour. Did I mention all Cloud Parliament’s teachers are feral and all their wisdom made up and marvellous :D). I’d better stop here…there’s so much.

I believe that if I stop I die. Cloud Parliament is a life force.

Does you work follow set processes or does it vary?

I’m not sure. I see what needs to be drawn/painted and I draw/paint it. The compulsion and process comes from what I’m allowed to see and know. Sometimes there are little models. There have been costumes and songs and inventions. And dances. And all their wisdom made up and marvellous :D).

Do you have any creative role models?

Oh, I learn from everybody who creates. We’re in it together. We’re a throng.

Why did you join Outside In?

Initially, I didn’t realise what Outside In was: I accidentally came across Kate Davey’s wonderful blog and had no idea of her connections with it until I joined.  I’m hopeless with social media and Outside In doesn’t seem to have the trappings of internet turmoil. It’s a calm place to be among other artists and it’s wonderful for that.

Do you think of an audience when you are making your work?

Has there been a stand-out moment for you as an artist?

The feeling that I sometimes capture what I’m being given to see (hear).

Is there an artwork you are most proud of?

I don’t see them as individual pieces — they’re part of the whole Cloud Parliament. I’m proud of the fact that I think I’m getting better at putting them on paper (and other surfaces!).

What are your hopes for the future?

It’s an enormous place with its own folklore and traditions — it’d be grand to have an immersive exhibition, a place, an embassy people could visit: pamphlets and books and song sheets and costumes.