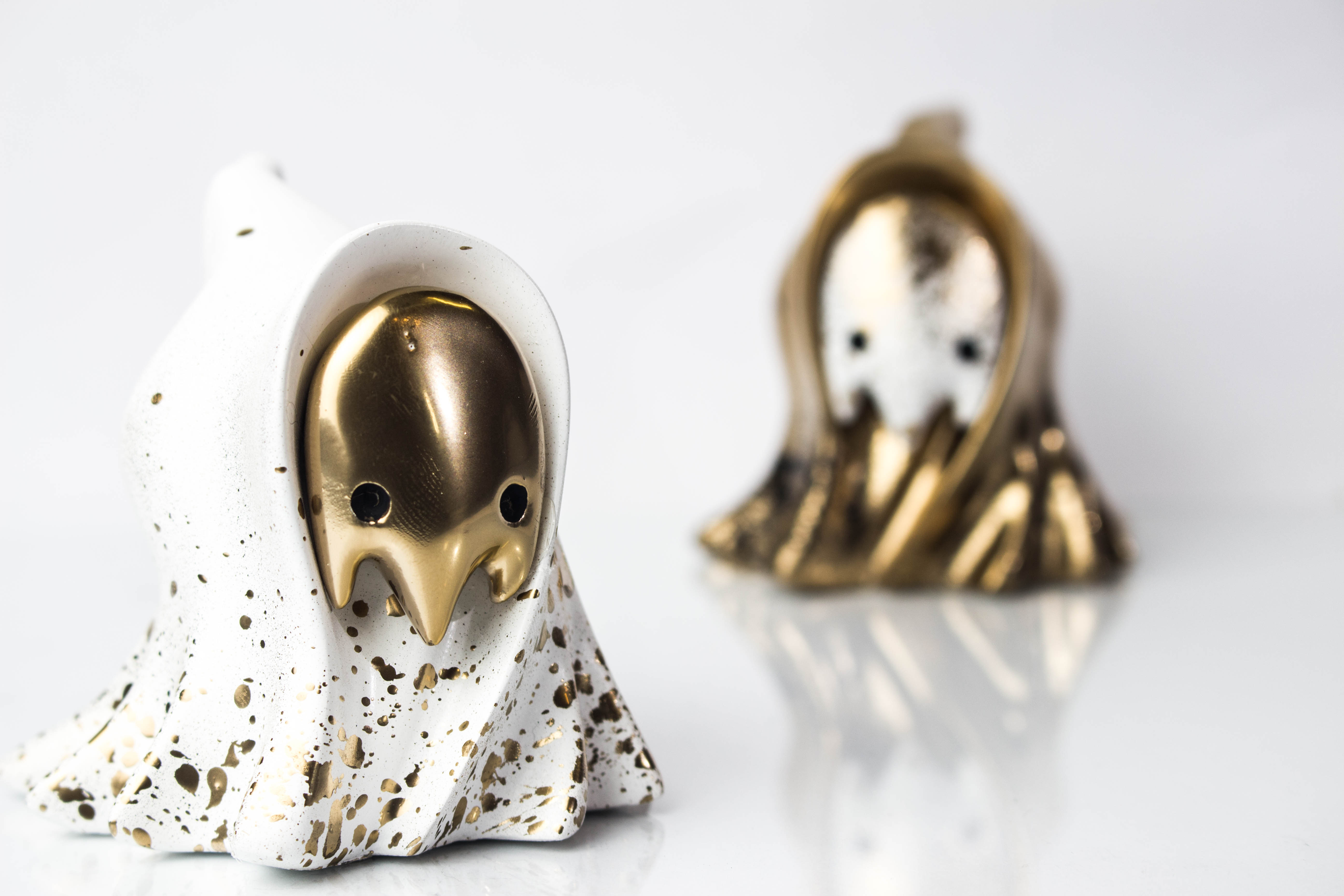 Each month we choose one of the fantastic artists represented on our website to be our Artist of the Month.

This month it is the ‘Grum Reapur’, described as ‘the antithesis to the Grim Reaper, instead of coming to take your soul he comes to save it in the darkest hour’.

Here we dicover the meaning behind the artwork, the journey the artist has taken to this point and how they hope the work will help others.

When did you first start making art?

I started creating things as far back as I can remember, often using blu-tac at school to create little sculptures during lessons. I ended up doing art as a GCSE but suffered the weight of social pressure telling me that being an artist was not a viable career path. Despite this the hunger for creating lingered deep within and never failed to die.

Has your work changed over time?

I struggled for years to really find a place that I could embrace my multiple interests, from graphic design, photography and music through to tattooing and sculpture. Only when I embraced these skills as a means for self therapy was I able to build my confidence to begin Grum Reapur

How did the ‘Grum Reapurs’ come about?

I really liked designer toys, having collected them since I was a teenager. It was an industry I always wanted to be involved in with its urban style and borrowing heavily from the graphic design world. I made my first Grum in 2016 and didn’t just want to make ‘another toy’, I was hungry to make something innovative, that could capture who I was as a person and allow me to do what I loved for a living.

How would you describe your current work?

My current work is very graffiti /street art influenced, using splatter to add an urban edge to the Grums. I have also recently made a few Halloween sculpts as it is my favourite time of year and these little guys are perfect for the season.

What do you hope your viewer takes from your work?

I would hope that people are inspired to chase their dreams in spite of the things that hold them back.

Having survived several suicide attempts and self-harm in my younger life I don’t want anybody to go through that. At one point my tagline was ‘i really want people to stop kiimg themselves’ but found it far too raw for certain audiences and that soon became ‘the anti-suicide  artist’. My own depression was caused by trying to live under systems that didn’t match who I was and breaking free from that world allowed me to feel at peace with myself.

Is there a process you follow, or does it vary?

For awhile I have tried to get into a routine of things, with running the website, recording videos for social media, photographing the products, editing them, working on the story, sculpting new models, collaborating with other artists…the list is endless so every day comes with its own set of challenges and fears I need to face.

What would you say are your biggest sources of inspiration?

I have a very symbiotic nature with my following, they help me much more than I think I help them. I used to think social media was about numbers, but the value of connection I have had with people really helps inspire new models, sculpts, colourways (designer toy term for variants in colour) and build my confidence moving forward.

I do my best to answer everyone who messages me, some are showing their support whilst others are in desperate need of someone to talk to. I will never forget the first one that made me cry with joy and highlight that I am having the effect I want to have. The message read something along the lines of “I was on the brink of killing myself last night and then I discovered your work, it completely changed the course of my life”. Even as I write this that feeling of inspiration swells my heart and tears come to the eyes.

Do you have any creative/artistic role models?

Greg Craola Simkins, I discovered this artist when I was just starting college age 16. His style was so unique and playful that I became obsessed with his work, often printing out some of his work onto A4 paper and gluing them inside my art books to keep me inspired to stay strange.

My love of his art can be seen on my left forearm, where I have a tattoo of his work. It would actually be a dream come true to be able to become his student or apprentice.

Alex Pardee, another artist who’s work I love, there’s something about neon colours and wrinkles that struck a chord with me. Often creating these nightmarish cartoons based on pop culture, with ink splattered across the page or canvas, you can see he just has alot of fun with it. Fun is paramount to me, without it we are doomed to the gloom.

Takeshi Murakami. I discovered this artist around the same time as Craola and loved the size of his sculptures and recurring patterns and characters contained within his art. It was the first time I had seen an artist that was also a brand, little did I know that this idea would permeate through to my own art.

Have you had a standout moment to date/is there a piece you are particularly proud of?

I actually have so many Grum Reapurs that I haven’t put up for sale because I really love them. I know eventually I’ll need to pay a bill or two so they will leave me then and in my sadness of losing them I will sculpt other ones that I love just as much if not more. Also being contacted by galleries that want to feature my work is amazing, each and every one really helps me understand that I am headed in the right direction.

What are your artistic ambitions?

I am currently writing the story for comic book that I hope to get published, which will truly tell the story behind it all, the struggles I went through and the ways of thinking that helped me overcome my own demons. I would also love to work with some larger materials to make public installation pieces that stand around 20 feet high or so. To show how imposing mental health problems can be to the general public. There is also an incredibly strong desire to travel with the Grum into different communities for a week or so getting to engage with people off the street and their struggles with mental health problems. This is one of the reasons I like doing shows so much, people will often talk openly about their struggles that they’ve never been able to talk to anyone about aswell as people who have survived their own suicide attempts. I am pretty sure I have hugged every single person who has stopped by to talk to me and that feels incredible.