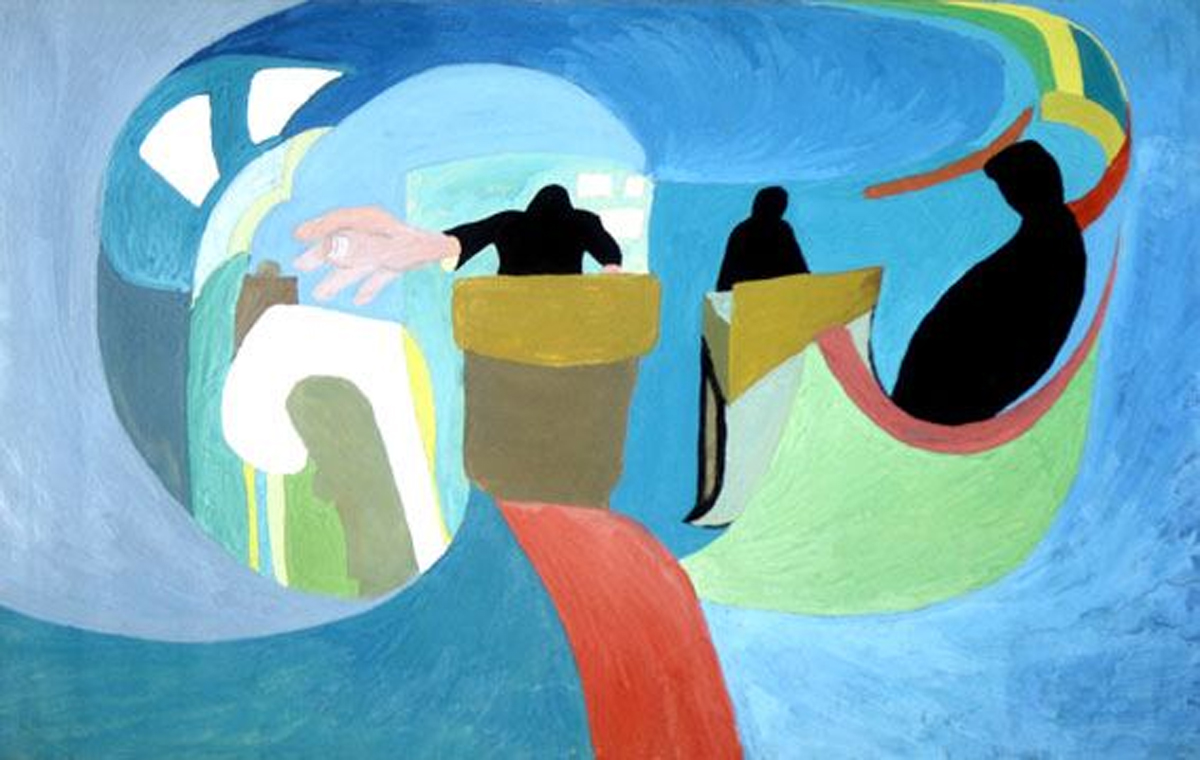 Simon Le Boggit shares how he’s gone from choosing ‘art as a skive’ subject at A-Level to it impacting his life. He also looks ahead to the upcoming Strange Relations Outside In exhibition at Fabrica Gallery and how his work being selected for it has been a ‘big thing’ for him.

Why and when did you start making artwork?
During my final year of science based A levels, I was expected to study an additional non-exam subject – I chose Art as a skive. Tired of having to replicate the umpteenth boring still life, when given the task of painting a chrome kettle I decided to just represent the contorted image in its reflection. The art teacher announced that looking at it made her feel “all tingly”, and my bemused friends seemed to like it too – it seemed like a result to me! I still possess that first painting. Those times coincided with the arrival of mystery aches and pains in my back and legs, which were gradually getting worse. I was also aware of a feeling that I was increasingly going off the rails, and it was getting harder to keep a lid on it. Both of these things ultimately made sense when, years later, I was finally diagnosed with Ankylosing Spondylitis.

Eventually a distinct pattern emerged where for no obvious reason I would suddenly become tremendously listless and down, followed by an eruption of acute arthritic pain and stiffness a day or two later – proof of how arthritic inflammation can directly trigger depression and fatigue. To cut a long story short, after expressing myself (and seeking solace) through a variety of art forms, I have ended up as a multimedia artist spending a lot of my time composing emotional music from nothing more than chaos and repetition, and seeking to extend that method into animated video.

What does art mean to you?
In general, I think and feel that good art is a vital source of unfathomable aliveness.
For me, art seems to be both a crucial form of engagement with the world, and also a distraction from its relentlessly mundane difficulties. If I go more than a couple of weeks without doing something creative, my mood takes a serious nose-dive – I suspect it to be an anxiety based thing, but I don’t really know. I’ve also found that art has sometimes offered me a route down which I can somehow embrace and come to terms with otherwise impossibly difficult issues, while holding them just far enough at bay to avoid them becoming too hot to handle.

How would you describe your work and what inspires it?
Over the years I’ve come to realise that pretty much all of my artwork is routed in a fixation about chance, and how random events sculpt our lives, and how chaos and repetition can sometimes feel very much as if they have some level of intentionality about them. It’s all illusion of course – a consequence of millions of years of evolution turning us large brained apes into compulsive pattern-recognisers. When it comes to the crunch, I can’t see any rhyme or reason in the weird universe that we each briefly rattle around in. I’m pretty sure that living with Ankylosing Spondylitis for decades has had a lot to do with such an outlook – chronic pain overlaid with sporadic acute pain and depression and fatigue can do that to a person. That said, life can feel great too! Tension between harmony and discord interest me a lot.

Do you think about an audience when you create your work – if so what do you hope a viewer might get from your art?
Ultimately I feel driven to create art to suit myself – whether it be as a distraction, or for some sort of buzz from a bright new idea, or to exorcise some demons. However, work failing to find an audience (which has often been the case) feels somehow unfinished, so ideally there really does need to be some form of public engagement at the end of the process. I don’t dwell too much on second-guessing what other people might actually make of my art – everybody is different, and everybody’s mood is different from day to day. I just hope they end up feeling that the encounter has been worthwhile.

Can you tell us about the Strange Relations exhibition and your hopes for it?
I hope the exhibition may offer some fresh experience for people who are intrigued enough to step inside the Fabrica building and check things out.

I find Carys Reilly’s tiny sculptures to be totally disarming, and very touching. As for my own large scale video Even Giants Have To Bend, I hope it may envelop people in a way which takes them out of themselves for a little while. The internet dominated world is so full of relentless narrow-band voices – sometimes it is good to simply stand and stare upwards, and drink in the turbulent white noise of rustling leaves overhead for a while.

Do you have a standout moment in your Outside In journey so far?
Having my video Even Giants Have To Bend chosen for the Strange Relations exhibition is a big thing. There is something really special about finding that some people – strangers until recently – have been so stirred by an artwork that they are prepared to dedicate their time and energy and resources into bringing that piece to the attention of many other people. It really is quite something! Beyond that, I’ve been very moved by much of the artwork which I’ve seen by Outside In artists – such a vibrantly honest outpouring of humanity in its extremity.

What are your future hopes and ambitions?
As human civilisation teeters on the edge of collapse yet again, I hope to keep on turning out chaotic artworks while enjoying a tenuous calm in the eye of life’s hurricane for just a bit longer… and ideally get paid for it.

Strange Relations will open at Fabrica Gallery, Brighton, in October 2021.

Click here to read more about the Strange Relations exhibition
To see many of Simon’s videos in full, please click here