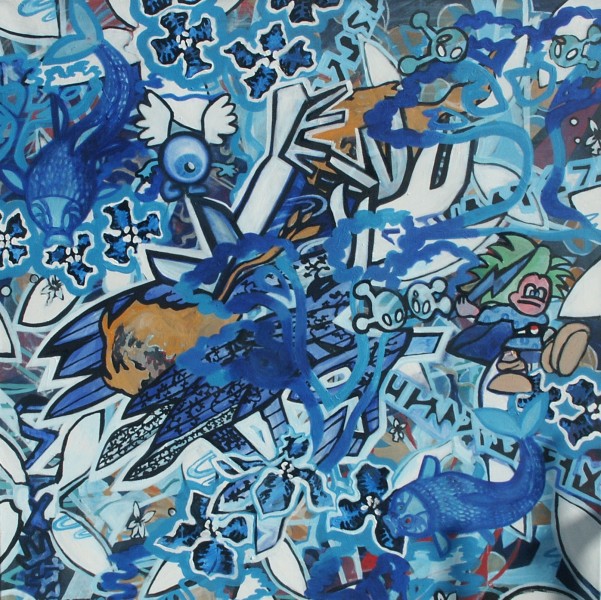 Journalist Kate Davey asks Luke Austin-Heywood some questions about his practice and life as an artist.

1. When did you first become interested in art, and what sparked this interest?

I have always, for as far as I can remember, wanted to be an artist, or more specifically a painter. Many of my family members are involved in the arts and design world. My mother is a painter and was an art teacher; my step father, a working design consultant; and my father, a painter and an animated film background painter, working on films such as 'The Snowman' and 'When the Wind Blows'. Many of my siblings have, like me, been to Art College and my partner is as ceramic artist. It seems that art is in my blood.

2. How would you describe your art practice? How has it developed over the years?

I am a post-modernist painter. My practice has evolved through-out the years: having been interested in abstract expressionism and process based painting during my degree in Exeter, producing large works up to eight foot by six foot. These were created by using tools as well as brushes, sometimes made on the floor, sometimes on the wall and these were influenced by artists such as Gerhard Richter (as I think every painter has been at some time) as well as Jackson Pollock, Willem De Kooning, Mark Rothko, Jason Martin, and also Bridget Riley.

After my degree I moved on to doing a post graduate diploma at Falmouth Art College, during which my work evolved towards pop art, street art, graffiti, science fiction, Japanese art – old and new and modern music/identity: attempting to fuse the past's abstract expressionism with pop styling.

My most recent work has taken these ideas further, evolving the surfaces of the former abstract expressionist works with contemporary ideas of identity and art history as a rich seam of interest. I am attempting to create works which fuse all these ideas and explore artworks: as if I were a sort of fanatical art tourist, taking holidays in every style and artist that takes my eye and residing with the environment of the artists chosen. For example Van Gogh, Matisse, Cubism, impressionism and Dellacroix are the artists of the past six months, before that it was Theodore Gericault’s Raft of the Medusa and David's Napoleon and Glen Brown who were the holiday destinations. Where next?

For the last fourteen years I have been suffering from a chronic pain condition caused by a spinal injury as well as a subsequent mental illness. The illnesses have held me back as although I have had the time I have not always had the strength to paint and it was difficult achieving the standard I wanted because of the pain, exhaustion and mental illness, but also because of the foggy mindedness due to medication.

This is steadily changing as I have been given a new drug regime which has taken the edge off the pain enabling me to think a little clearer. It is still very hard and I have had great difficulty working. I struggle to sit and stand because of the severe back pain. I also have difficulty organising the representation of my work because of pain and concentration, although I am positive that with a few breaks I might yet be able to make a living as an artist. This is my goal…

To see more of Luke's work, check out his Outside In online gallery by visiting www.outsidein.org.uk/Luke-Austin-Heywood