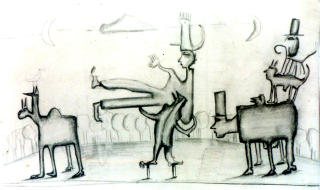 In this article for Outside In, Dave Mutnjakovic shares his experiences and thoughts on ‘Outsider Art’. It is something he describes as ‘alternative and complementary medicine’ adding: “I think science has held the limelight for long enough, what is needed now is a hybrid doctor/artist/teacher.”

It started from nothing. I had hit “rock bottom” inside the emergency room at 4:30 in the
morning wide-awake on a bed in a hospital corridor. Hypnotized by a symphony of lonely empty moans seemingly sung from between cracks in the gates of hell. Darkness overwhelmed me as the star embedded in my spinal column was losing its light. Doctors and Nurses walked by with hallow eyes. Our humanity lost in the putrid smell of failing intestines, struggling arteries, and a circus of substance abuse.

“Abandon all hope ye who enter here” was Dante’s words as we crawl with him toward the Inferno. At 4:30 a.m in the emergency room I was swallowing his wisdom whole.
This wasn’t the first time my body had failed me. At the vulnerable age of 14 l was horizontal on what might have been my deathbed. Waiting alone in a hallway just like this one. For a surgery that promised to end the source of my debilitating pain.
Consumed by hopelessness in the bowels of the hospital I had nowhere else to turn but inward.

My hands found a pen and paper, and began to extract images found within me that even my dreams have a difficult time making sense of. It was in this trancelike state that the sun began to rise. As I drew out onto paper an image which reached out to the nurses curiosity. One by one they came to speak to me, watch me draw, and offer me things like blankets and water. Even presumptuous doctors stepped out of catatonia and smiled. I realized a simple act of creation allowed humanity back into an environment which was only moments ago void of vitality.

I understood at that moment that it is those of us, who have had extreme experiences with pain, trauma, deteriorating health, and by some kind of magic are given the ability to translate the images of hope that manifest during extreme events in our lives. That these people, call them outsiders if you will, have an integral part to play in building a bridge between science and art.
Health and Illness.

Outsider Art is not simply a shelter for deranged personalities. The outsider artist has a mastery of the imagination. Wherein the outsider develops the ability to investigate the source of illness in the individual, community, or civilization as a whole. The image is then extracted and transcribed on a physical medium by reliving the individuals experience with pain and trauma sometimes for days, weeks, in my case even a year, possessed by the image. It is the pull of the inner self which leads the artist into a highly specific, special category of altered state where trauma becomes the vehicle to a higher plane of consciousness.

Why not define the outsider artist as one who has the courage to answer the initiatory call of a health crisis wherein one recognizes ones power decipher the mystery of aligning oneself with the enthusiasm of the universe.

Eventually my bed was rolled out of the hallway into a room. As I lay down the finishing touches on the image, my pen fell to floor and I into a deep sleep. I awoke to my doctor reading aloud the text scrawled behind the drawing. He read it to me as if it was medicine.

As you spin faster and faster you are suddenly aware
that everything is calculated. You view the
power at the top as a frozen emotion whose
mind is a chaotic bulb ready to pop at any ulterior
perspective.

You view this image with pristine clarity and begin
to giggle.

You realize you are rolling with the punches
and this adds to the hilarity of the moment.

As your are filled with an insatiable hunger you break
from your bind.

The gears have shift.

The best intention is comic.

The best moments are merry.

The best creations are fun.

The cure to all disease is just this,
make it a merry whirl.

Break past the pain, and sorrow,
fight hard to get over that mountain.
Once surmounted you will find new
perspective. You will see there
is not death, that death was
invented by the great mechanism.

Here you will find laughter. You
will laugh as only a child can.

A child who does not understand mortality.

Here you will find your bliss.

For more about Dave and his work, check out his online gallery HERE
If you would be interested in writing for Outside In, email Laura.Miles@outsidein.org.uk with the subject ‘Blog submission’ and a brief outline of your topic idea.