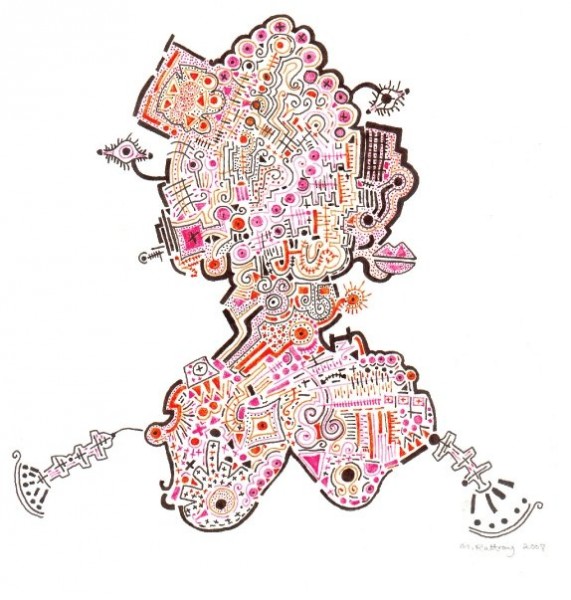 Journalist Kate Davey asks Michael Rattray a few questions about his life and practice as an artist and musician.

1) When did you first become interested in art, and what sparked this interest?

During Primary school we visited the original Dali's "St John of the cross" which amazed me. When I was a teenager at school I always loved surreal stuff like Dali and Picasso. Anything a bit odd which stretched the imagination and made me think outside the box. I liked a lot of modern art too. I was really into the band Nirvana at school and some of the records I bought had Kurt Cobain’s artwork on them. I found them fascinating, but art was always something I thought that only other people could do. Growing up I liked anything that was out of the ordinary art wise.

I wasn't actually very good at art during school, I found it difficult to sit and draw or paint things which were in front of me. I wasn't very good at it. Coke cans, still life fruit bowls etc. – I couldn’t help thinking "Why am I being asked to try and replicate this when it's in front of me? I could just take a photo!"

I always felt frustrated with art class at school. If I had been asked to create from my imagination and go with the flow from my own instinct and head, things may have developed much earlier. I really got into art when I was 21 as a form of therapy. Music had always been my only media of expression up until then. I actually began painting in hospital.

2) How would you describe your art practice? How has it developed over time?

I think it's very much a love / hate thing for me. Ha ha! I tend to do music no matter how I’m feeling, but creating my artwork usually happens when I am struggling mentally or emotionally – usually with depression, energy levels and suicidal ideation.

The anxiety and feeling of not being able to sit with myself comfortably in my mind has often driven the creative process. At other times the work is just a distraction. In no way do I want to promote depression as a necessity for the creative process. The condition itself is too horrific an experience and anyone can get the illness. I find the myth of the depressive creative very obnoxious. Mental disorder can happen to anyone. However, I do tend to not do art when I’m feeling a bit better. It’s very rare I do.  I can't plan it. Like songwriting, I don’t sit down logically and say "This is what’s gonna happen creatively". It's more like I'm the medium to whatever wants to come through be it music, words or art ideas. Sometimes I have a vague idea, sometimes it’s random.

I went through a phase of painting acrylics, then oils, then fine line drawings. I’ve also worked with lots of different mediums from medications to nail varnish. Who says what I must use? I also done a collection of felt tip pen drawings, as I wanted to rebel against the "oil on canvas" standard.

I think when I am in despair it’s a horrible uncomfortable drive within me which makes me determined to create and achieve something, even when I see no meaning in it at the time. This is often the case, especially with my last batch of work and bout of depression. I felt like it was all pointless and meaningless. Every part of the creative process meant nothing to me.

Viewing the work in galleries now I see it as another language, another way of communicating. Most of the time I don’t understand my work, its just expression. I don’t have to understand it for it to serve its purpose. It's just nice other people like looking at that expression.

3) What is your work influenced by? Do you have any favourite artists?

I think much of my work is a reaction to just being a human being and living in the world and reacting to the environment – Giving meaning to meaningless times in my life. I think some of my work is an angry reaction to the way things have been in my life. Illness is such a burden and its only natural to want things to be different. It helps pouring that out into my work. I do meditation, which helps me accept things more.

Being a human is pretty scary and weird if you really think about it. That’s one of the themes of my new album. And a big thing for me is death. Most people try not to think about it. Having depression I think about death a lot. I mean we aren’t here for time without beginning, then we are here for a little while and then we aren’t here again for time without end. LOL! It’s such a difficult concept to get your head around – How do we create meaning when we die anyway?

Most people don’t think about that! My art helps me cope with that. When I’m gone my work will still be here. That’s a nice feeling I suppose, that my work and music will make me a bit immortal. For a while anyway, Lol!

My favourite artists are all the famous surreal ones – anyone who pushed the boundaries of what was acceptable. I love Vincent van Gogh too. I feel so sorry for him that his work was unrecognised in his lifetime. One of my favourite artists whose work I have really enjoyed lately is Adam Neate. His work really touches something in me that I can’t put it into words.

I love any art which challenges boring or learned ways of thinking / ignorance or mundane expectations.  I love shocking stuff. Some modern art really pushes this to the limit and I love watching the reaction of people being told that a pile of bricks or an un-made bed is art. I mean, where do you draw the line.  Art should mean total freedom for the artist.

I've always felt the artist always gets the last laugh as they are looking for a reaction whether that’s positive towards their work or not. I love Banksy too, as his work is simple but very clever and funny.  It's great to look at too. I love his gay policeman and Vietnam children running from Ronald MacDonald – really funny.

4) What did it mean for you having your work selected for Outside In: Scotland?

I am totally delighted at my work being selected. The standard of work and talent in the Outside In exhibition is phenomenal and I feel proud to have my work alongside such talented artists. It just gives the struggles even more meaning to be part of an exhibition where the artists struggle with similar issues. It’s like a big gang.

5) Could you tell us a bit about your work, ‘O.C. Demon’, that is in the exhibition?

The work took around 3 weeks to complete. I had no idea of what it was going to be. It was very much a distraction. I worked on it everywhere, at home, in bed and in coffee shops. Every day when I worked on it I had a cupcake.

Again, it was anxiety which drove the work and when I view it now I really see that in it. I wonder if other people do too? It became a manifestation of a monster I was battling with. I see it so positively now. I can't put a price on it at the moment as it feels special to me, with what I was going through and the fact it is the new album cover too. I will let go of it one day but not yet.

6) The piece is also the cover for an album of your music. Is your artwork and music closely linked?

I've not used my artwork much on the covers of my music, but feel this piece is right for this one. I suppose my artwork and music are the same thing really, but just using different mediums. I can put on a face or not. Glaze things over or not, be direct or cryptic.

The process is so similar. I get ideas, I write a collection of songs, I record, and then I release them. It’s the same with my artwork. I create a collection of works, and then apply for exhibitions. It a process of letting go, like life itself really. For me, artwork and music are the same thing – expression.

7) What are you working on at the moment?

At the moment the drive to do artwork has lessened. I do have one idea I want to follow through with which involves my medication in a glass case. I need advice on how to make it physically possible though. I tend to get many ideas at the same time and often it’s hard keeping up with myself. This is where the meditation helps. I have already written another album’s worth of songs, but I need to take it easy because of health issues. One day at a time is the only way at the moment. I'm recording a version of a song for someone’s birthday at the moment. I like doing that. I’m also working on a music video.

I have also just had 4 pieces of work exhibited in Glasgow Art Hub's exhibition 'What is art?'

I am applying for exhibitions at the moment as I want to keep sharing the work I’ve done over the last few years. It is an addictive feeling watching strangers view my work, trying to understand it then letting go of it.

I will also be working away at all the new music I have written. The new album is out on December 2nd 2013, so I should really take it easy for a while! Hopefully my health will get to the stage where I can gig again.

I would also like to get involved in a community arts project if my health allows. To give something back.  People have said that my art and music helps them, but I’d still like to do something more active to help people. Art and music can be a bit introspective, but for me it also gives my life meaning and purpose when I desperately need it. That's something you can’t really put a price on.