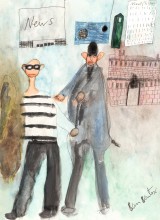 September's Artist of the Month is Giles F. Morgan. Giles attends the Community Programme at Pallant House Gallery and has been a practising artist for many years. He currently has a piece of work exhibited in the Outside In: South East exhibition in Hastings Museum & Art Gallery. Journalist Kate Davey asks him some questions below.

1. When did you first become interested in art, and what sparked this interest?

When I was a child, I was about ten and I enjoyed the art classes.  Then probably again when I was in Sutton in the 90’s.  The art has changed since then, I had a break, moved to Bognor, and then the work became darker.

2. How would you describe your art practice? How has it developed over time?

3. What is your work influenced by? Do you have any favourite artists?

Politics. Death. There are not really any artists, but I do like neat pictures. I’m jealous I can’t be as neat, like Sargent or Constable, or classical architecture.

4. What did it mean for you having your work selected for Outside In: South East?

It’s good but it’s not like I’ve won anything. I want the public to see them.

5. Could you tell us a bit about your work that’s in the exhibition?

It’s a pirate which is very apt as it’s in Hastings and they had a thing about smuggling. My name also means pirate. It’s Welsh too. It could be a Welsh pirate.

6. What are you working on at the moment?

I’ve done a couple of war pictures which is new for me. A load of tanks everywhere and a submarine. The houses are all on fire after the tanks have hit them. Like Syria. It’s very controversial.

I want to concentrate on music. I might try to play the guitar whilst painting a picture, using my feet to draw with. Someone suggested I should draw some pictures of people really big and throw paint at them to help with my anger. I might draw my care manager.

Image: The Media can get it wrong!