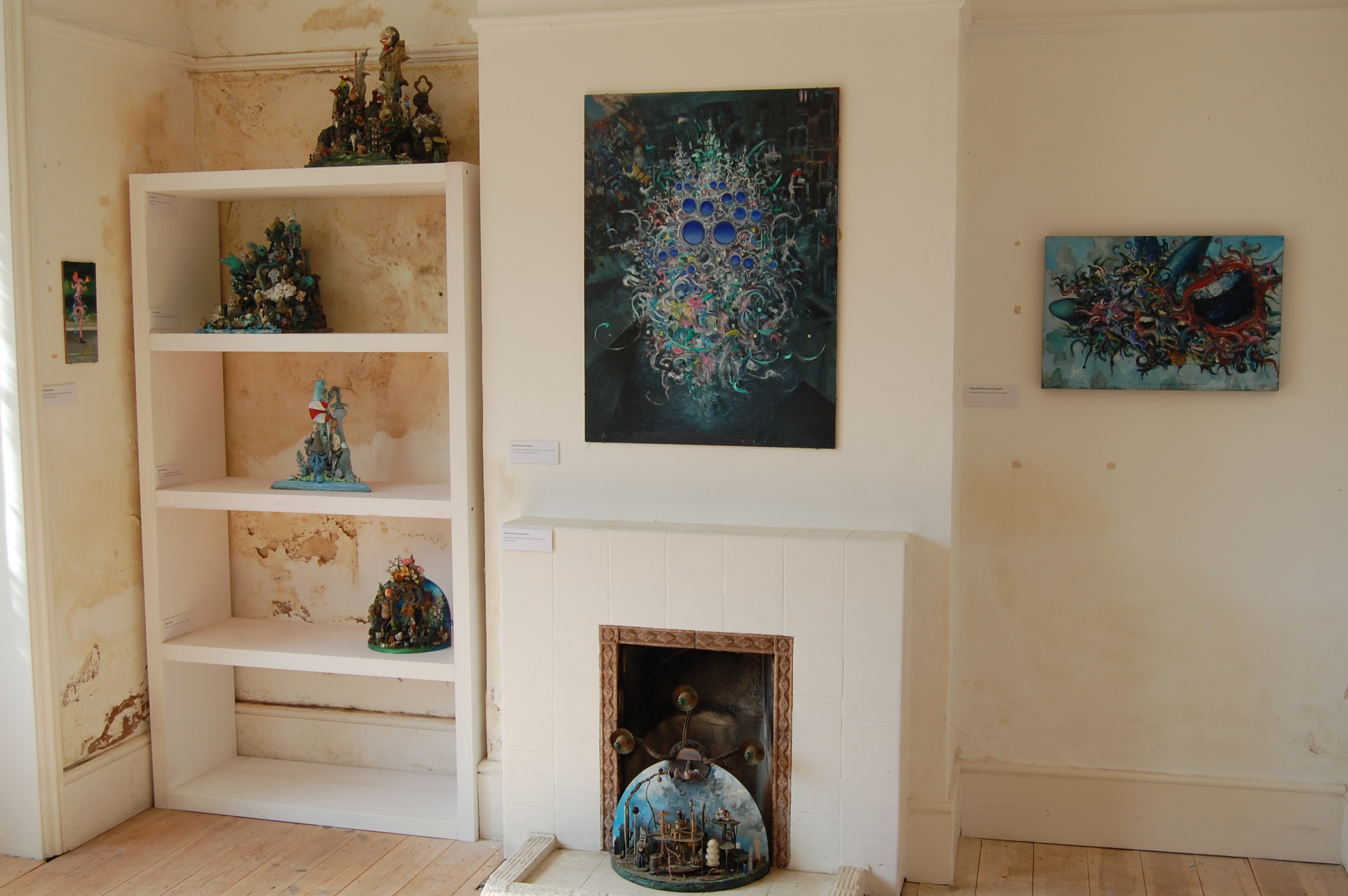 Christine Finn organised an exhibition at her house in Deal as part of the RIBA Love Architecture Festival in June this year. The exhibition titled 'Overlooked' featured two Outside In artists and was supported by Arts Council England. Below Christine reflects on the exhibition that occupied her house for just over a week …

Something overlooked from my late father's shed in Kent is now set deep within a piece of sculpture by an Outside In artist living in Hampshire. Ian Sherman kindly agreed to show his incredible assemblages in a show at my suburban seaside home this summer. Ian took over a former sitting room, where the mottled, damp-stained wall proved an unexpectedly perfect foil for his fantastically detailed and coloured creations, where beachcomb finds merge with pieces of this and that. Ian was showing across the hallway from another Outside In artist, Elzbieta Harbord, whose black and and white drawings hung on walls which still recalled childhood wallpaper, and a framed print of a Norwegian fjord. Elzbieta's inspiration for her drawings, and her ceramics and paper models, is her twin sister, a nun in France. It was intense work, which rewarded scrutiny. Both Ian and Elzbieta's work drew wry smiles from visitors peering in closely, and the talks both gave were a refreshingly frank insight into the valuable work of the Outside In project. While I'd suggested Ian find a souvenir from the shed, I invited Elzbieta to take a stone from the beach pebble and shell assemblage in a fireplace. She took two. The second is, by now, conceivably on a mantel, or in a drawer, at her sister's French convent.

These transformations were at the heart of 'Overlooked', an Arts Council supported exhibition held at my former family home in Deal. It also featured work by the photographer, Harold Chapman, who documented the outsider artists, of which he was one, who lived in a run-down hotel at the Left Bank of Paris in the 1950's. Now known as the Beat Hotel, the idea of these artists being self-taught, and working outside the art system, worked with the theme of Ian and Elzbieta's rooms, curated by Outside In's Jennifer Gilbert. Upstairs, I displayed the work of twenty patients from the art therapy unit at the hospital in the South of France where Vincent Van Gogh was treated a century before. The paintings were inspired by Van Gogh's life and work, and in a next-door bedroom, Van Gogh's letters from St.Remy, selected and read by the actor Michael Maloney, sounded out in a room dressed with fresh lavender. The artist alternated between joy and despair as he struggled to paint amid debilitating mental illness just before his death. The art therapy unit at St.Remy is called Valetudo after the ancient healing centre nearby. It was a project realised by a psychiatrist, Dr. Jean-Marc Boulon, an expert in Van Gogh's condition and its misunderstanding. It is, I feel, a complement to Outside In, given its mission to promote the work of talented artists who need a platform for their work. Their paintings are sold in the gift shop of the historic hospital, with its homage to Van Gogh, which is where, seven years ago, I first saw them, and was moved to buy one and bring it back to Deal. Outside In's exhibitions and sales re-affirm the talent of artists so often overlooked.