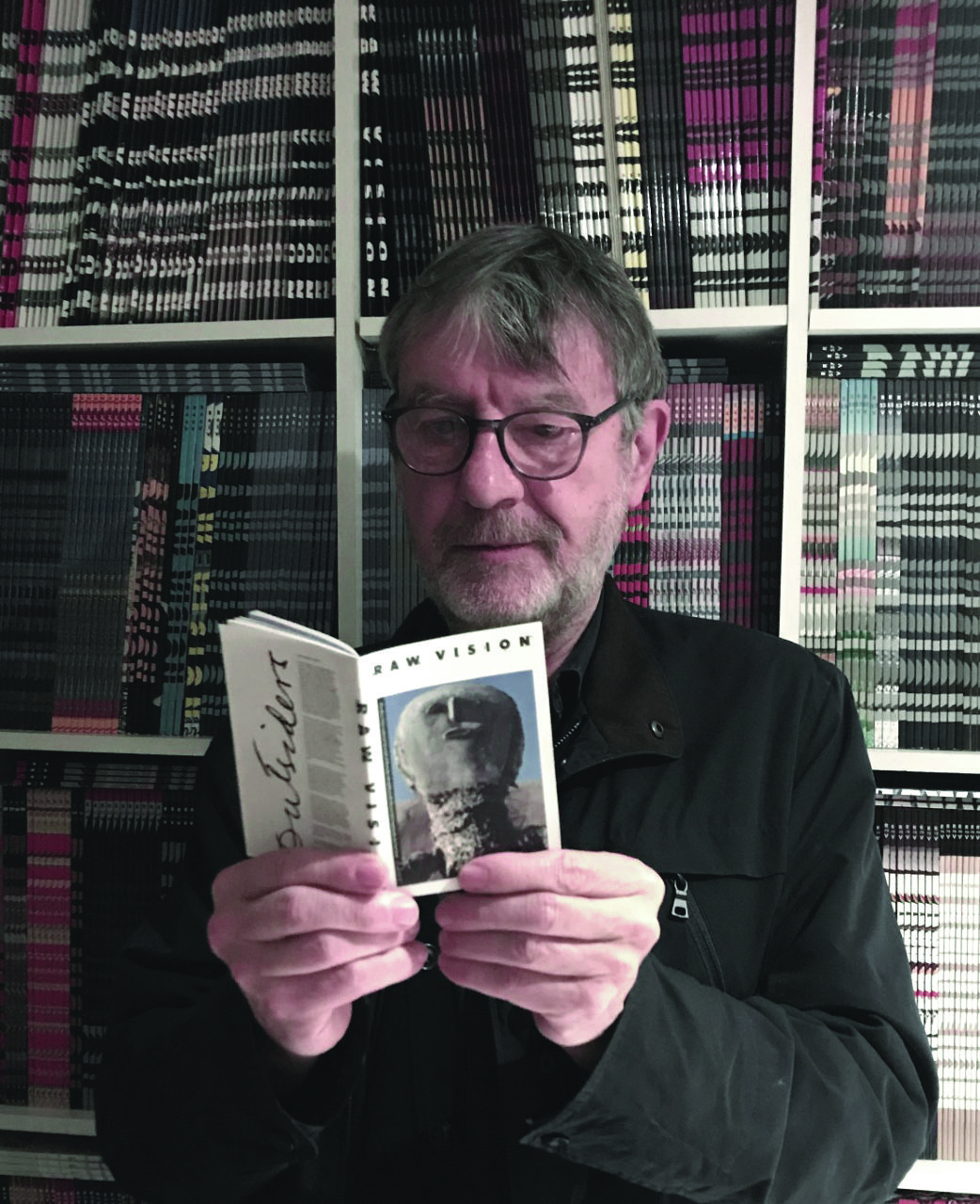 As part of our new series exploring Outsider Art, we are delighted to present a guest blog by Raw Vision editor John Maizels on the subject of Collecting Outsider Art. We will be presenting various viewpoints and contributions, also examining the term ‘Outsider art’ itself, and would welcome any input on how readers feel about the term and its use and those wanting to contribute written or visual pieces.

“The first collections of outsider art were not art collections as such but regarded as collections of specimens. The work carried out spontaneously and privately by patients incarcerated in huge 19th century institutions was not really considered as art. Patients’ works were usually thrown away on a daily basis by staff and that time inmates had very little privacy or respect. However, a few doctors became fascinated with this unusual work and inferred much about their patients from studying them, so at first they became diagnostic aids, medical examples of different conditions.

“In Scotland Dr WE Brown was an early collector of such material and even commissioned one of his patients to draw portraits of some of his inmates to illustrate their conditions. Dr Cesaro Lombardo assembled one of the most important of 19th century collections in Turin and from them deduced his thesis linking madness to genius and creativity. It was Hans Prinzhorn who carried out the first serious study of ‘art of the insane’ and recognised the aesthetic value and importance of patients’ work and the huge collection he built up in a few years (1919-1921) is the most important historical collection still in existence. Following from Prinzhorn’s discoveries and theories it was Jean Dubuffet, the initiator of the concept of art brut (1948) who was able to build up the world’s greatest collection in this specialised field, since 1975 housed at a museum of its own in Lausanne, the incredible Collection de l’Art Brut.

“When I first became obsessed with outsider art and published Raw Vision in 1989 there were very few private collectors, none in Britain. The main impetus of collectors was still to preserve works that were ignored or overlooked in some form of public or museum collection. There were very few dealers or galleries in Europe that involved themselves in offering works for sale. I met Roger Cardinal in the late 1980s and he had no outsider art on the walls of his home. Indeed the art historian John McGregor, one of the first to study the work of Henry Darger in depth, proclaimed that outsider art should never be sold or owned and should only be displayed in museums. There was a feeling that outsider art was almost holy, and somehow above commerce which would corrupt it. These opinions were shared by many and I was influenced by them myself which inhibited me as far as acquiring work was concerned.

“In the USA however the collecting of ‘folk art’ had been a hobby of people since the pre-war days. Included in traditional Americana such as weathervanes, duck decoys and storefront figures, American folk art was already a collectable commodity by the time outsider art – dubbed ‘contemporary folk art’ – arrived on the scene. It was the establishment of the Outsider Art Fair in New York in 1993 that really gave the collecting of outsider art that huge push. It was also the first time I bought work myself, some paintings by Southern outsider ‘folk’ artist Richard Burnside.

“Collecting has always been something I had enjoyed. We had collections of stamps, matchboxes, cigarette packets, badges, Islamic prints, comics, flying ducks and snowglobes, so moving into outsider art was a nice step up.

“Once I had broken my personal barrier, I managed to look out for work of artists I admired such as Aloise and the Gugging artist Oswald Tschirtner and even on a small scale, Adolf Wölfli. Work was still quite low priced, especially American, so I was happy to add such artists as Mr Imagination, Mose Tolliver or RA Miller to my collection. One of my favourite artists of all time was Nek Chand and I was honoured enough to know him well, promoted his work and placed them in museums on both sides of the Atlantic, as he wished. He gave me a whole lot of his sculptures once which I couldn’t believe at the time but it was such an astute thing for him to do because he knew before I did that I would exhibit them, donate many of them and they would inspire me to spread the word of his genius.” John Maizels.

If you would like to join the debate on Outsider Art, either with a written or creative contribution, we would love to hear from you about what the term Outsider Art means to you and to hear your views on matters relating to the subject. You can get in touch with Matt at matthew.forbes-dale@outsidein.org.uk or post online using the hashtag #outsiderartdebate.