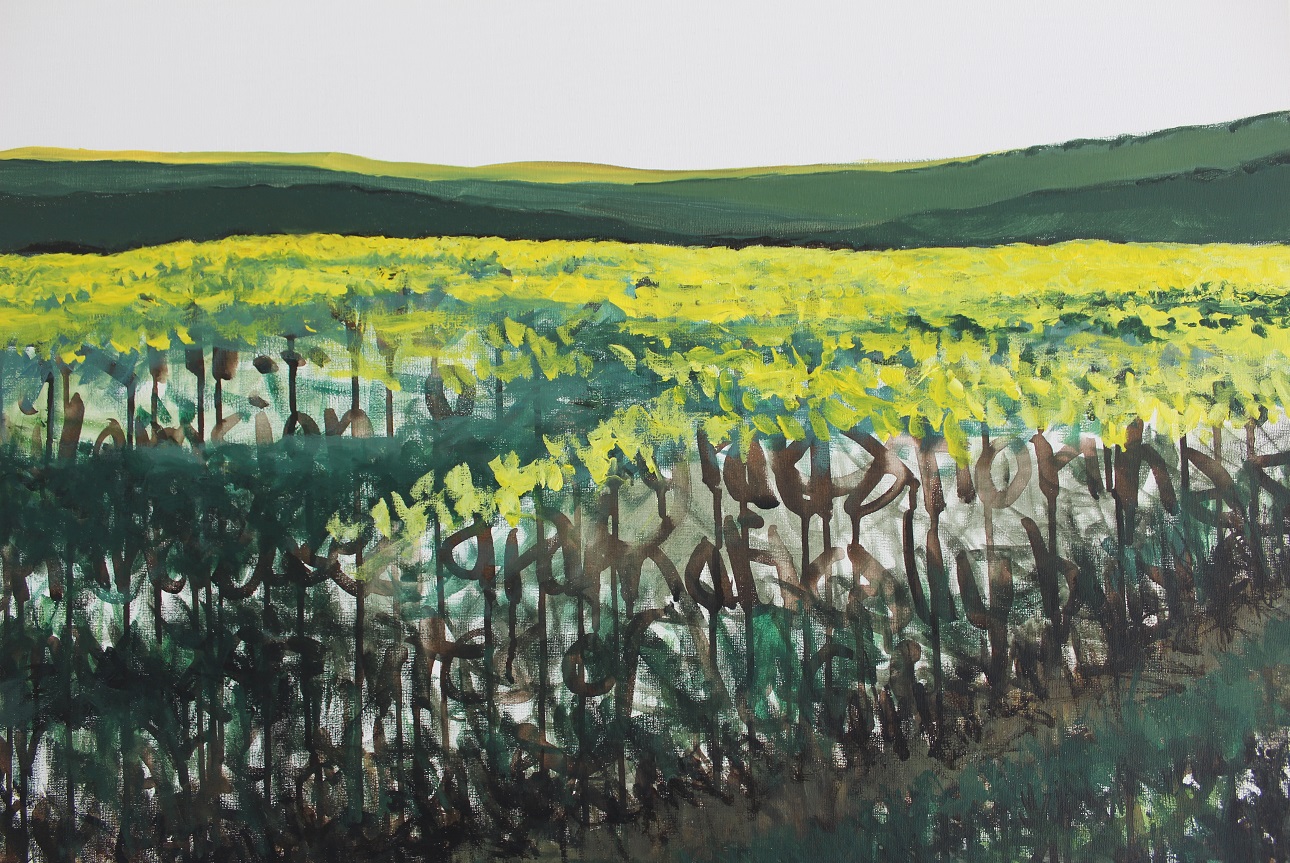 Outside In artist Clare Gravenell reveals how the destruction of our environment creates a dialogue for change, inspiring a new series of work…

I feel a deep sadness when I see, hear and read about what is happening to our local environment, especially the destruction and loss of our natural world and animals, and now our own existence is question as the destruction is making an impact on our lives.

We can’t see it or maybe not aware but…

“The air we breathe, the water we drink, the earth we plant in, the food we eat, and the beauty and diversity of nature that nourishes our psychological well-being, all are being corrupted and compromised by the political and economic systems that promote and support our modern, consumer-focussed lifestyles.” (www.rebellion.earth/the-truth/the-emergency/)

This quote is from the Extinction Rebellion website. It became the title and focus for a series of new art work that I am producing.

Extinction Rebellion is a political group and movement that has been in the media much this year from its protests all around the UK, in major cities and focusing on London. It’s purpose is to stop people in their daily lives and cause disruption in order for something to be done by the government, and to increase awareness, to stop what they consider…

“We are facing an unprecedented global emergency. Life on Earth is in crisis: scientists agree we have entered a period of abrupt climate breakdown, and we are in the midst of a mass extinction of our own making.”

You may have noticed the symbol, I keep seeing it on posters and billboards all around the city of Brighton where I live. The circle represents the planet and the Extinction Rebellion movement uses the hourglass as a symbol to serve as a warning that time is rapidly running out for many species including ourselves!!!

Now I must admit I am not a political person at all. I never talk about politics, never been on any march or demonstration but I have a love of nature and care about every living thing on the earth which is our only home. As an artist, nature in all its forms, has been a constant source of inspiration for my creative work. In the past I worked as a gardener, participated in conservation projects and recently worked with charities that get people out into nature to improve their mental health and well being. Being outside in nature makes me feel alive, it’s full of colours and textures visually. I ended up travelling to Australia, New Zealand and Thailand so that I could experience and paint new exotic landscapes.

In April 2019, I got a place on Outside In’s Step Up Exploring Collections course at Pallant House Gallery in Chichester. The theme was landscape of the South Downs and I choose to research a photograph by Simon Roberts. To my surprise his work is political, exploring our modern society and sense of identity.

This research culminated into questioning my motives as a painter, looking into the history of the land and how modern society is evolving so much that we are losing our connection to nature at the same being oblivious of our impact that consumerism has on it.

From researching Simon work and his desire to make a cultural or political commentary of our society through photography, I was triggered into looking at my personal beliefs. Perhaps time to give up my self indulgent aesthetic drives and make a piece that had a powerful political message to convey?

Seeing as I feel officially non political, I had to reframe this question to…what do I feel most passionate about instead of political?

The answer was our earth.

As artists we have the power through our creativity to change the way people look at or view things. I wanted to engage and make the viewer aware, as Simon reflected in an interview with him,

“the landscape is not a pretty picture”

But one we are destroying and we don’t even see it. There’s an undeniable truth to this.

So I started to use quotes from the Extinction Rebellion website that linked directly with a “pretty picture” of a landscape that I had visited. Below is the quote (written at the top of my blog) painted with ink onto a canvas then an aesthetically pleasing landscape, reflecting the quote, painted over it. This piece is being shown in the exhibition at the Pallant House Gallery in Chichester til 13 October.

This act of painting over the facts written on the canvas becomes symbolic and a social commentary. It reflects that we can’t see the destruction on the surface and we are also oblivious to what is happening to our environment. The title of the piece is what remains of the text buried underneath.

This is an ongoing process and theme to my new artwork, whereby I select quotes from the Extinction Rebellion website. Then put them into context with a scene that is pleasing to the eye that is in my local environment. I have been absolutely shocked by some other the facts I read about climate change and its impact. Here is one example about on our soil,

“More than 95% of what we eat comes from soil. It takes about 500 years to form 2.5 cm of top soil under normal agricultural condition. 50% of the planet’s topsoil has been lost in the last 150 years, leading to increased pollution, flooding and desertification.”

Because of my gut wrench reaction when I see or read what is happening to our earth, I feel compelled to do something and this energy goes into creating. This is a new piece I’m currently working on.

The painting that is based on the crops grown and farmland of the South Downs where I have walked through. The title is another quote…

“EARTH..We’re losing our soil…Soil erosion and degradation has been increased dramatically by the human activities of deforestation for agriculture, overgrazing and use of agrochemicals”.

Are you aware of what’s happening to your local environment?

Do you know about climate change or the extinction already of some of our animals/ species?

It has been a highly topically subject lately in our media and in the UK in the last few years there has been a massive change towards environment issues. Just last week The Guardian reported,

“In a recent poll 71 % of Britons think that the climate is more pressing issue than Brexit” (Source: The Guardian)

There is so much information now on the internet or via social media for us to read and discover what is really happening. It can be overwhelming, alarming or depressing to see the effects of our modern lifestyles of over farming the soil, air pollution from planes and cars, oil tanker spillages polluting the oceans and killing the sealife, burning of fossil fuels that are increasing the CO2 levels which increases the temperature of our planet (causing extreme weather and the polar caps to melt), huge areas of deforestation and so much more the list is endless.

On a more positive and productive note all the widespread campaigns about the bees since 2012, as they have been a species that are in decline and rapid extinction, have made a huge difference to my local parks and gardens. I have been amazed at the efforts to “keep Britain buzzing”. These pictures are of a specifically planted wildflower meadow (Preston Park, Brighton) which has attracted hundreds of bees daily and given many other creatures a home.

The wildflower meadow is visually stunning and inspirational to me not just as an artist but as a sign that we can change our environments without the need for our government to change we can make a difference on an individual and collective level.

I had noticed ,as I spend much time outside in nature, a large number of dead bees on the ground so I became involved in the Save The Bees Campaign with Friends Of the Earth. Again, when I looked at the information on their website I was utterly speechless,

“Britain’s bees are in trouble. 35 species are under threat of extinction, caused by a combination of stresses- loss of habitat, exposure to pesticides and the effects of climate change. 97% of flower-rich meadows have been lost since the 1930s.” (Source, Friends of the Earth)

As well as a desire to make people aware of what is happening to our environments I have the same desire to take act and do something positive so I sent off for a pack of seeds for bees so that I could give them a home with the flowers grow and this has been a national incentive as fundamentally they pollinate all our flowers, fruit trees and many crops. Without them we have very little to eat, flowers to see and a loss of other insects.

This inspired me work on a piece whereby a wildflower meadow is painted over this quote and show how we can change the terrible loss of 97% in the last century.

What’s important to me is not only to read something online or see news on TV, but to deeply engage by getting out into nature and see for yourselves the over framing of our soil, smell the fumes of car pollution, look at the amount of chem tails from planes in the sky, notice the thick layers of smog over the sea. As its when we truly experience the reality it affects us more and I believe this becomes a catalyst for change and to get involved to help save the earth and its animals.

I am writing this blog to increase awareness and address what’s happening to our planet from this new direction in my artwork. Art creates a medium and dialogue for social and environmental change. I hope to encourage others to take action, whatever feels right for you, to prevent even more damage, destruction and loss. To work together to create a sustainable future that is based in rebalancing, replenishing and giving back to the earth what we have taken.

“Let’s not shy away from the truth. It will be a challenge, it will cost money, it will mean tough choices, but the human race is at a crossroads for our environmental future….To avoid climate breakdown we have to act, that’s the reality we live in, but we can all rise to meet it head on.” (Source, The Independent)

Clare Gravenell’s Outside In gallery

Environments exhibition – how to get involved