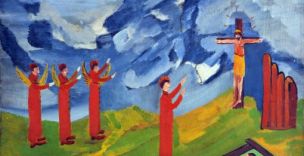 Henry Stockley (‘Busdriver’ Stockley) (1892–1982) was an English primitive artist. Once called “the greatest inspired painter since William Blake,” Henry Stockley was arguably the most important primitive artists active in the period 1930 to 1960. His work suffered years of neglect partially reversed with the publication of a number of articles on his life and artistic production and with a major exhibition devoted to his life and art at the London Transport Museum (July 1996 to March 1997). The location is significant. Although trained as a meat inspector, for many years Henry Stockley was a bus driver. (Wikipedia)

To read the Metro article about Henry Stockley follow the link: