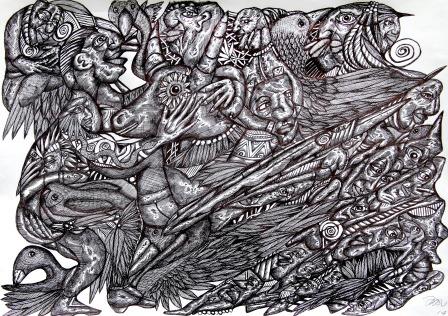 Jan Arden was one of seven artists selected to exhibit in The Inner Self: Drawings from the Subconscious at CGP London in September. He has also had work shown at this year’s Outsider Art Fair in Paris. Here, he talks about his influences and inspiration.

When and how did your interest in art develop?

I was taken to the Tate Gallery as a young child and encouraged to draw by my father and continued to draw until I was a teenager at which time I got more involved with acting, mime, and dance.

I would very often explore the Tate in all its entirety being inspired by Rodin, Ebstein, Picasso, Salvador Dali and so many more.

Additionally, I would read comic books; they were a big influence for me and a great inspiration.

What influences your art?

I am influenced by the world of the inner mind, consciousness, the unseen that permeates the world inside, the dreams that are unforeseen; the altered state of mind that allows us to create. I am also inspired by Shamanism and the world of ritual and storytelling, of animals from the nether world intertwined with human forms as depicted in Celtic knot work and African art. I am influenced by what comes into my head when I see a shape.

What process do you go through when you are creating a piece (starting with the initial idea)?

There is no idea, just a notion of the possible outcome if I open myself to the ebb and flow of creativity. The process is to not really be bothered by the outcome, the finished product is the result of the journey, and then the traveller moves on.

Which artists, if any, have you drawn inspiration from?

I have drawn inspiration from Van Gogh and Picasso, the amazing Lichtenstein, and British artist Peter Blake.

Do you have a favourite piece? If so, which one and why?

I don't think I have a favourite piece of work – they are all special to me.

What do you hope the viewer gets from your work?

I really hope that the viewer comes away inspired and mildly amused, inquisitive and ready to write a story in a medium of their choice about the experience of looking into the picture. I hope they experience total immersion.

What has been the highlight of your artistic career?

The highlight of my artistic career has been to see my work exhibited at CGP London in Southwark Park with Outside In – and then go global! What a result! It’s been a lifetime in the making and I am thrilled!!!

Has being a part of Outside In been beneficial for you? If so, how?

I had been on their books for a year before finally getting the opportunity to exhibit with a group of amazing artist at CGP London in September, so I have to say a resounding yes to that question.

It has restored my faith in my art and my ability, and regardless of what happens I have always vowed to continue with my work – to sit and just draw.

What is next for you as an artist?

I have just had some work exhibited at the Outsider Art fair in Paris, and have been part of an exhibition at the Reggio Emilia Museum in Italy. Who knows what’s next? Maybe a solo show somewhere – one can but only dream!