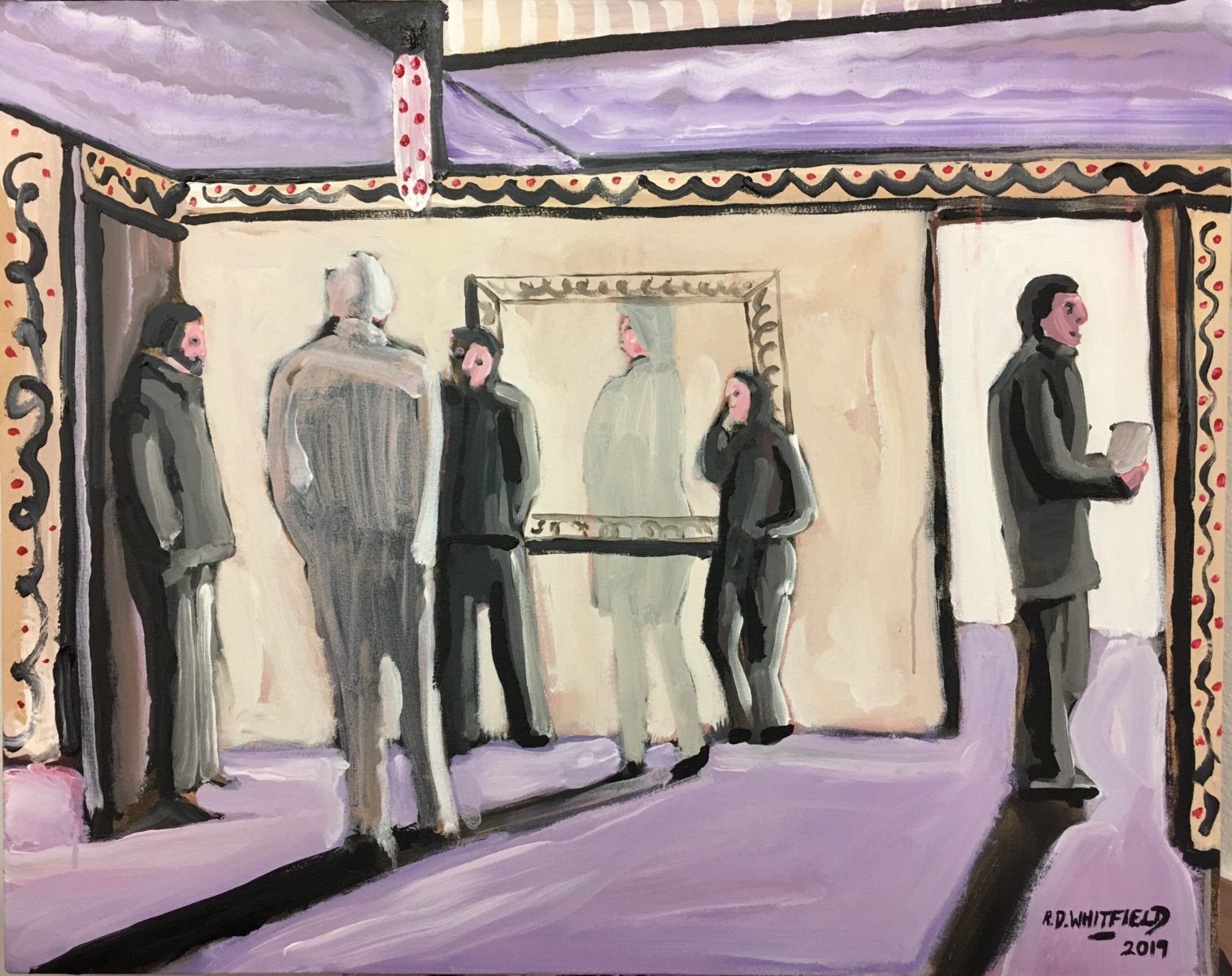 This week’s selection of work from Environments, the forthcoming national exhibition featuring the work of 80 Outside In artists, takes us from serene and more troubled dreamscapes  to tropical isles and  gritty inner city life.

This week we are looking at the work of :

Artist Phillip Knights sets up a surreal scenario in ‘The Conversation’, where two figures oddly engage whilst also seeming to mutate  into furniture and a third looks on, possibly eavesdropping. Tension within a social setting and the influences of Surrealism can also be found within Richard Whitfiield’s ‘Coventry’ which he says is “about being in a room with a group of people and one person has been excluded,” adding that “some of the people are ghostly figures and so although being there they exist on different wavelengths.”

A dream of happier past times inspires Pinkie Maclure’s ‘Self Portrait Dreaming of Portavadie’. Pinkie learned the art of stained glass whilst working with a friend making door and window panels. Uninspired by the dull designs, she started to make her own artworks, and in this portrait she returns to the carefree days at her grandfather’s house on the Scottish island, before land was sold off and the environment “blown up by oil companies.” Deaf artist Oliver Jamin chooses to be inspired by the endurance of nature in his work ‘Tree of Life’, depicting a tree with strong roots that manages to hold on to its leaves. Trees also figure in the work of Olly Coulson, “Tree’s in Moonlight”; he has been creating artworks since he was 16 and enjoys experimenting with different mediums. Paul Bott is interested in hot, exotic places and using inspiration to dream up surreal landscapes, as can be found in his ‘Desert Island with Orange Sky.’

Rebecca Appleton is a  self-taught artist who is inspired by wildlife and nature to present the world as she sees it  and her piece ‘Tunnel Vision’ was created especially for the ‘Environments’ exhibition. Artist Richard Fletcher is currently homeless “but not without hope” on the streets of London, having experienced rough sleeping in many other British and French cities prior to that. “Life has always been a bit of as struggle because of my restless nature,” he says, “and creativity has been my definite saving grace.”   Pointillism, as seen in ‘The Flautist’, is a medium which suits his current circumstances. “Right now is my dots and doodles period,” he says.

‘Moonlit Voyage’ by Rob Bloomfield is from a series of twelve works inspired by the short poem ‘Flannan Isle’ by William Wilfred Gibson, exploring tensions and ambiguities in the narrative in addition to ideas of scale, mood and composition. Finally, Phil Stewart artivist reacts to waste, pre-loved and pre-loved materials he has been given or comes across, as seen in his collaged depiction of the metropolis, ‘City Life’. “I don’t think we need more stuff,” he says, “so I use what has already been used extending its life, creating pictures but also fun and functional items.”