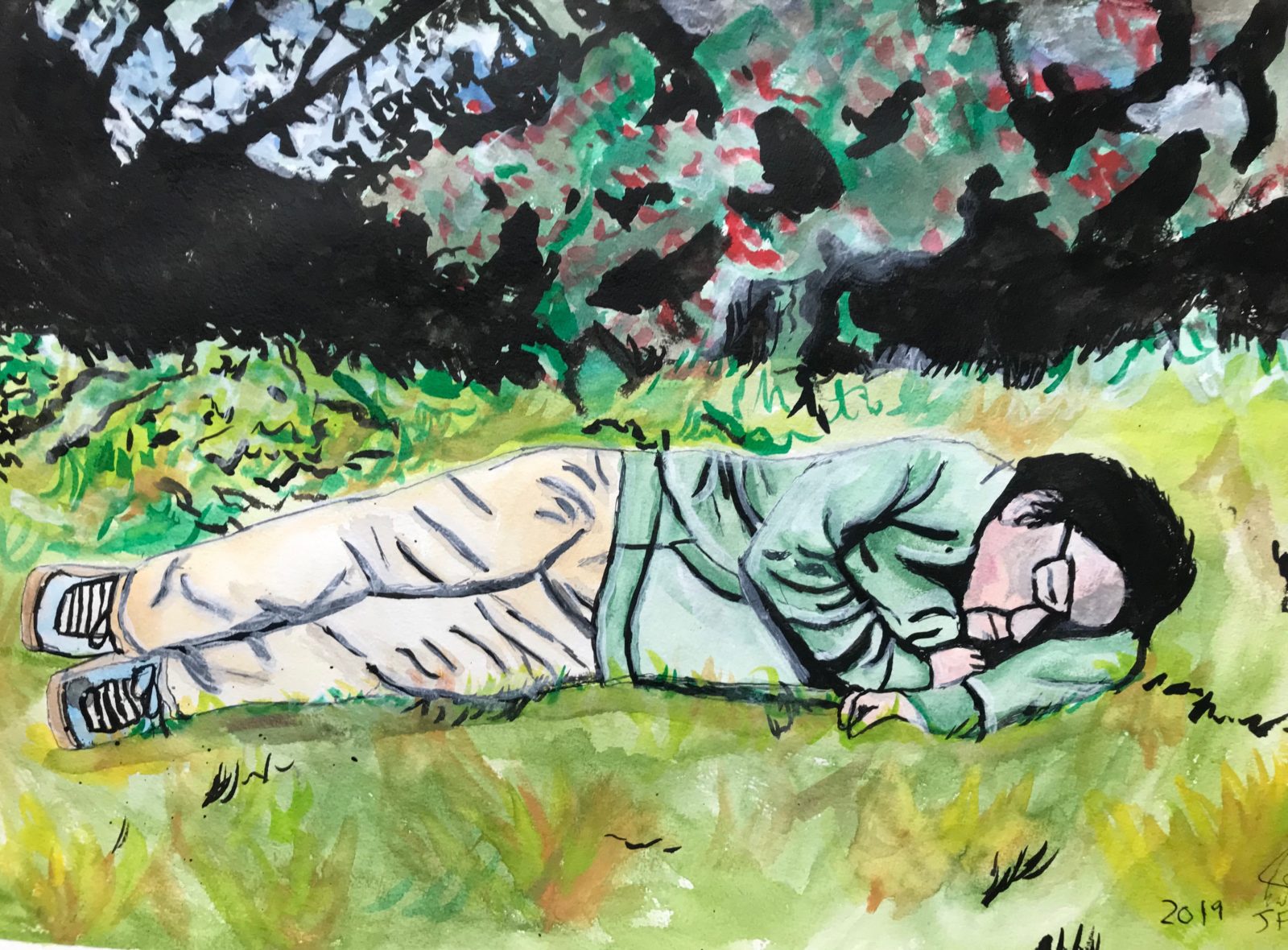 Animal subjects, both endearing and threatening, swimmers and natural and urban scenes, sad and serene, feature in this week’s pick of work to be  featured in Outside In’s forthcoming national exhibition ‘Environments’, which opens on 28 October  at the Piano Nobile gallery in London’s Kings Cross.

This week we are focusing on the work of:

The swimmer in Irstev’s work ‘Beatles at Smethwick Baths 1962’ is being observed by none other than the Fab Four themselves, whilst the bathers in  Joshua Madden’s work ‘Great Whites Attack Southsea Bathers’ sees a global catastrophe bring on a marine massacre; “Global warming brings on the sudden appearance of Great Whites at Gunwharf Keys,” he explains, “eating all our tourists!”

The animals featured elsewhere are placid and serene – the colourful monkeys in Jack Churchyard’s ‘Tropical Trio’ and another charming trio appearing in James Alison’s ‘3 Bears in the wood by the river’. The ethereal larks within Juliette Goddard’s were painted on the 4th July in Sussex and are inspired by the haunting piece of music of the same name by the composer Vaughan Williams.

Figures within and looking into nature are central to the next three works.  Jas Elbaccush’s ink and watercolour piece ‘Rebellion’ features “me in my calm place,” says the artist, whilst Isabelle Haythorne’s ‘Too Far Away’ is a moving response to the artist’s discovery that her uncle had died while she was on holiday in Greece. All she could do was sit and draw the view from her room, distraught that she was too far away to comfort her family. An eerily beautiful  glimpsed night scene of  fog rising from Pells Pond in Lewes, illuminated by street lamp and swirling round a single birch branch inspired Jackie Bennett’s ‘Pells Fog’, woven from materials including horsehair, nylon, viscose and cotton.

Finally, two more urban and structured scenes – John Aitken’s ‘Edinburgh Windows’, which captures the grandeur of the city’s architecture  in impressionist pastel tones and Ian Wornast’s ‘Vauxhall Bus Station’, created out  of the artists passion for the history and development of London Transport. He notices and researches changes to the structures around the city and creates graphic yet personal mappings in response.