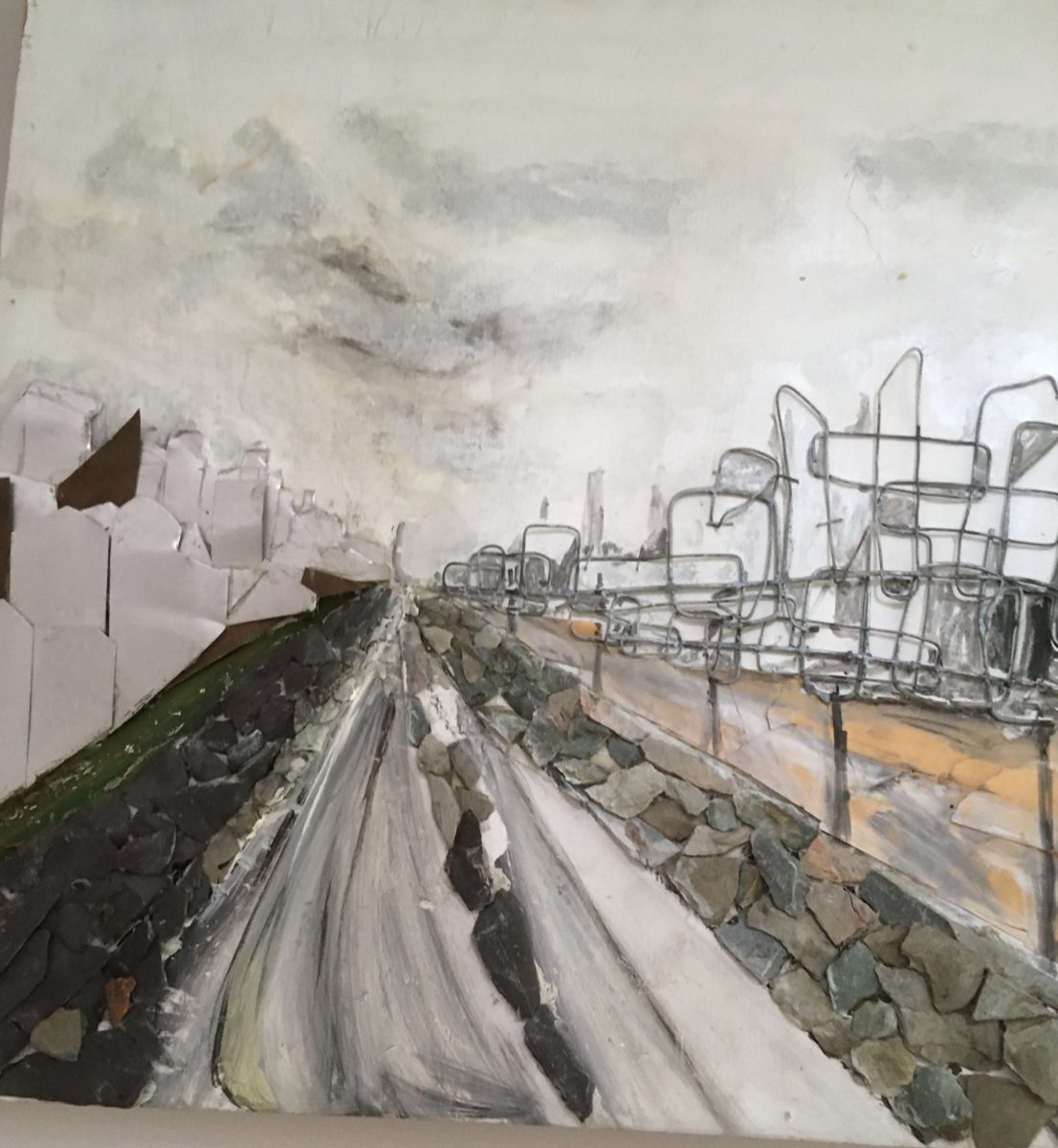 Varied environments, from swirling rock pools to imagined buildings, feature in this week’s pick of work by Outside In  artists to be  featured in  the forthcoming national exhibition ‘Environments’, which opens on 28 October  at the Piano Nobile gallery in London’s Kings Cross.

This week we are looking at the work of the following ten artists:

Marie-Ange Pakiry is a 71 year old artist now living in Margate, who has only recently been able to exhibit her work and who uses a variety of mediums including paint, ink, wood, stone and metal to create an atmosphere or express her mood.  Her eerie landscape ‘Road to Nowhere’ is a response to “the urban decay after closure of factories” and pit closures. Nathan Wong’s ‘Portsmouth home to the Royal Navy and numerous homeless people’ makes a statement about Portsmouth as both a home to the Navy whilst also being a city facing a crisis of homelessness, with many from different circumstances, including ex-soldiers suffering with PTSD,, sleeping on the streets . The work depicts different scenarios as well as including written statements and the thoughts of the artist, a recurring theme in Nathan’s pictures.  Matthew Hayward’s ‘In Syria’ powerfully captures the aftermath of an attack on the city, depicting “people in the streets of a Syrian city after a bombardment.”

Matthew Staff’s untitled piece is a response to our responsibilities in the face of climate change. He comments “As I created this work in oil slick I thought of our role and nature’s ultimate power over  us that she has, “ he comments. “ Even though we have changed our climate, ultimately our climate will survive and we are the ones who will be left with nothing.” Artist Matthew Beadon has attended Community Arts Project in Darlington for many years. He describes his drawings as “pictures of houses” and they usually contain architectural details or geometric patterns. Momo Roche is 22 and has lived by himself in the mountains since he was 15. “Schooling was not appropriate for me,” he says, “because of various neurodiversities, disabilities and physical ailments.” His works are inspired by images or “unconscious documentaries” collected online and that “include a play of both human and natural elements.”

Ludovic Foster’s ‘Tide Pool Spill’ is influenced like much of his work by encounters with the natural landscape in East Sussex where he has lived for a number of years,  as well as his experiences as an avid swimmer, and has an energy derived from constant revisiting and rediscovery of the work. Nnema Kalu creates raw and intense artworks driven by an instinctive and determined urge to build repeated marks and forms.

Michael Rees’s  oil on canvas ‘The Hermit’ presents a solitary figure, both revealed and obscured, whilst Mike Hughes’s ‘Fox in Winter’ is an illustration for a poem by Rogan Wolf which contains the following lines; “In the small hours a fox saunters down the empty road, red tongue sheathed in dark steam.”