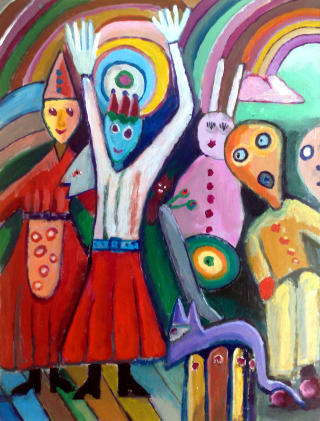 This latest blog post is written by Phil Baird, an Outside In Ambassador. He was asked to share his thoughts on the role, explain why he wanted to be involved and what he would say to others thinking about signing up.

The first thing about being an ambassador is that it is a privilege that I am very grateful with.

What then is the role of an Outside in Ambassador? Firstly the role and idea of being an Ambassador is very new one although there is a quite early painting in the National Gallery called The Ambassadors by Hans Holbein so perhaps here is a longer history of art ambassadors than is currently known?? I think the primary aims are to represent the group that has come together under the umbrella of the Outside In parasol.

I have formally taken part in the specific role as a contact and explainer at the Outside in exhibition at the renown Sotheby’s so partly a front of house curator element.  While at Sotheby’s I am pleased to have met Hans at base the door man and at best the host who has a similar job and I personally think of him as an Outside In Ambassador of an unusual sort, he greets people and is informed about the artist and visitors and even patrons with some knowledge of the art itself. I try to understand the art and keep it simple there are ideas and concepts within artists of the Outside In community, however mostly not bound up in huge writings and critical theory.

What  holds together the ‘Outside Iners’ is that the art works is hand produced/crafted, a makers art.  with every imaginable materials from traditional materials such as cotton duck canvas to cardboard packaging and even sealed condoms. I have also run  workshops, one in particular at Stow Market, Suffolk, with the sculptor Anthony Carry – yes there was the workshop materials facilitating materials and participants – so also running a workshop is part of the ambassador role and [to] give information about the organisation so if you have done any of the step up training you are well on the way to becoming an Outside in Ambassador and in for a smooth transition of an expanding role.

Also ambassadors each have their individual networks; friends, contacts, artist pals, organisations and groups so each person can develop personal approaches. Many Outside In peeps, are quite vulnerable and face huge challenges quite apart from art barriers and it is respect for these differences, and that when providing ambassadorial support, [knowing] each person has different support needs that change over time. So also combining sensitivity with strength.

The role also includes simple acts of giving such as placing information in places where interested persons can find them so the leaflets are distributed  and at least read or followed up on.

This is really enjoyable as there are images in the literature to look at and so our artists work forms part of a community culture with its symbols made and created by ourselves AS A COMMUNITY OF MAKERS , not only artworks but appreciators and also even collectors and galleries of all sorts for everyone.

Also to talk about the work in a language that the other can understand so like the ambassadors  of countries in the picture  Holbein painted – understanding,  translating, appreciating appraisals of, in our case, the outside in artists’ work.

To find out more about being an ambassador, click HERE