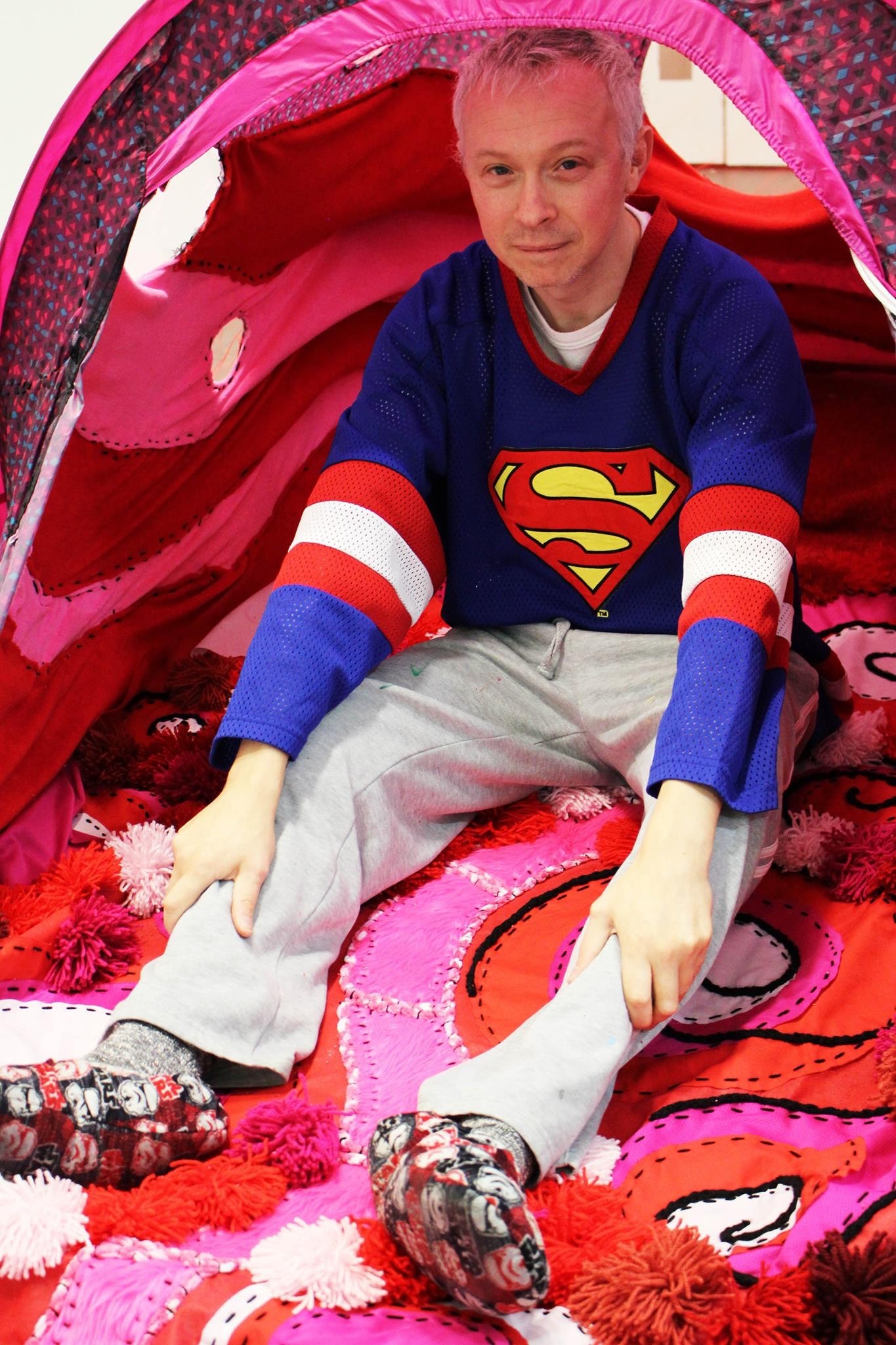 The news Outside In artist Clarke Reynolds has been nominated for the best visual artist of 2018 for Portsmouth Guide Awards is a fitting and deserved way to end what he deems ‘the most amazing six months of my artist life’. It shortly comes after the confirmation his innovative community art project will form part of Portsmouth Festivities next year. Laura Miles caught up with Clarke to find out what has made this year so special and his plans to make 2019 follow suit.

Two key highlights of 2018 for Clarke Reynolds have been featuring as Outside In’s artist of the month for October and undertaking a residency at the Aspex Gallery, Portsmouth, with his ‘Re-birth’ installation.

Being artist of the month is something Clarke describes as ‘the most amazing feeling’. “I just wanted to show my passion to others and inspire visually impaired people. With the recent feedback I got I achieved this and the bonus is the opportunities I have received afterwards,” he reveals. “Outside in have giving me a great platform to become the artist I want to be and the confidence to spread my art to the public.”

Clarke Reynolds inside his Re-birth installation at Aspex Gallery, Portsmouth

One such opportunity was the work at Aspex, it saw Clarke take a pop-up tent and use different textiles and techniques to create the womb-inspired structure. The result, he says, is designed to reflect his own rebirth as a visually impaired artist at the beginning of a new chapter in his life.

“The idea behind it was to create a sound installation that visually impaired people can be part of by entering the structure and immersing themselves with sound and texture.

“The process was organic as it was inspired by the soundscape that me and David Shervell created. I wanted the feel of anatomical with a nautical feel as this is was the sound inspired me,” he adds. “It’s all hand sown using black wool as for me, even though I can’t see, the wool is a texture I can feel as I sow each stitch. It was very hard work sowing inside as those weird angles plus pushing the needle through then finding it outside and pushing it back. There’s around 80 hours of work.

“The idea is that people with sight goes in with a blindfold to experience the art through my eyes just by sound and texture. The response has been great – they feel the sound is really intense but you feel comfortable in a soft environment which is what I wanted to achieve.”

Rough Seas, a piece by Clarke Reynolds, was inspired by the sounds and smells of Portsmouth

Clarke’s community art project for Portsmouth Festivities will also draw on the use of sound as inspiration. “The theme is 2020 but I’ve used it as the vision 20-20,” he explains. “The idea is I go to schools and care homes, play a soundscape of the sea and each person has a 20cm square piece of fabric which they will use to make a tactile piece inspired by the sound, then afterwards I sow them all together to make a large tactile embroidered seascape. My hope is to get 2020 squares.”

This project will see him return to Aspex Gallery, which will be acting like a hub, and the plan is to host days of crafting to coincide with it. Clarke admits: “This is the biggest thing I have ever done I’m scared but excited.”

Applications are also in the pipeline for other commissions, an Arts Council grant for an exhibition in Brighton and involvement in a show for a sight loss charity in Cambridge, all alongside currently working on his submission for the upcoming Ruth Borchard self-portrait prize which opens in January.

“For me sightloss has empowered me to become a better artist and 2019 is going to be more successful then the last year,” Clarke enthuses. “Watch this space.”

The Guide Awards, run by The News, Portsmouth, and sponsored by Fry & Kent, will take place at The New Theatre Royal on Monday, 28 January, 2019. Voting is open and closes at midnight on Sunday, 30 December – full details can be found HERE