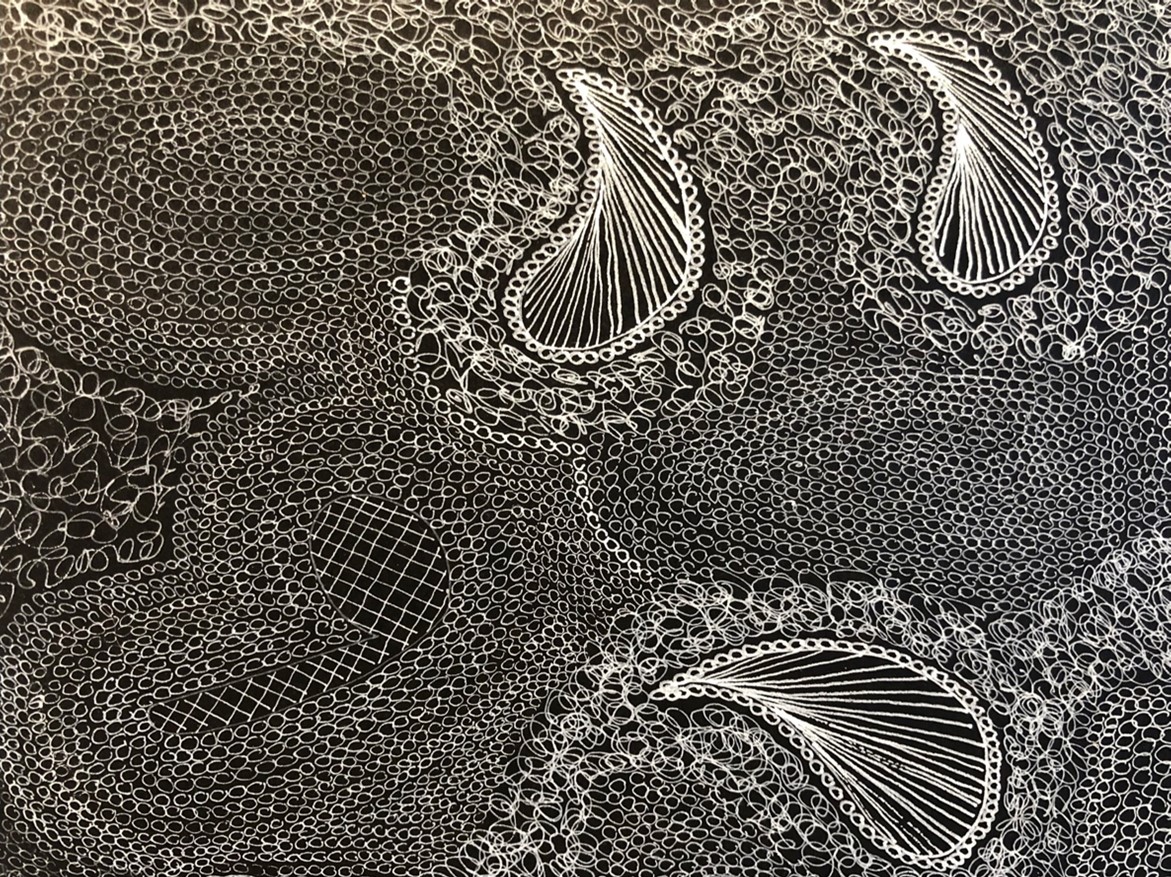 Ownership is the theme for Julia Oak’s latest co-commission diary, as she builds up to handing over her artwork but keeping hold of the creative conversation

Every Cloud Has A Silver Lining.

The past month has seen me in a kind of state of grief, ‘that’s not hard’ I hear others say, ‘this pandemic has taken so much from so many’. And yes! that is so very and sadly true, but it does not mean that different losses should be ignored or swept under the carpet.

Once I had finished the drawing, I rolled it up loosely, wrapped plain paper around it and it was ready to be transported to the gallery.

As it became obvious that the exhibition would be postponed, I had an idea.

I was commissioned by Outside In and Pallant House Gallery to create my drawing for Outside In’s Art Collection. That means once the exhibition was over the drawing would become the property of Outside In, however I do retain the copyright.

My drawing would not come home with me 🙁

At first, I felt uncomfortable about this, then I felt honoured, both emotions remained. I am making a film about the creation of the drawing and I have taken many photographs, so I have a record.

However, my work is about conversations, with myself and this time with Madge Gill and just because the drawing has been created it does not mean the conversation has ended, quite the opposite. I think Madge understands this, she refused to sell her work because she believed she did not own it and was a conduit of Myrninerest who guided her creativity. This allowed her to revisit her work.

I believe my work are conversations and I was brought up not to ignore people when they are talking to me – it is rude.

My drawings are all my friends and I drop in and converse with them all now and again, sometimes we retell the same story, other times new stories evolve, similar to any friendship. This time as the drawing evolved many new stories came forward as I hadn’t spoken with Madge before. Creating the work in my usual instinctive manner, I watched and listened to many new symbols and marks evolve on the paper as our conversation deepened.

Usually, I do not consider exhibiting my work until after I have finished the conversations. This time is different, I accepted the commission and the loss of future conversations, so when I wrapped up the drawing for transportation it was an ending, a loss and a grief.

My idea, actually more of a realisation, was that as my drawing was still here with me, I can do something about the future lost conversations. I decided to record all the symbols I had used on A5 sheets of paper and keep them in a folder for future chit chats.

As the days went by, I kept on saying, I will start this afternoon, tomorrow morning, after dinner and so it went on for a whole month. I was finding it so hard to unwrap the drawing, I had been overwhelmed by the magnitude of the world’s current losses and grief that I had avoided the loss of conversations with my drawing thinking them insignificant in comparison.

Then on the morning of 30th January, I got up, earlier than I have in previous weeks; got dressed and started drawing on the prepared A5 sheets of paper.

As I did, I could feel my breathing change and my body relax and knew I was back on track and as the first drawing evolved, I knew that I had come to terms with losing my drawing and that the A5 record was going to work just fine.

Click here to read more about the Madge Gill co-commission