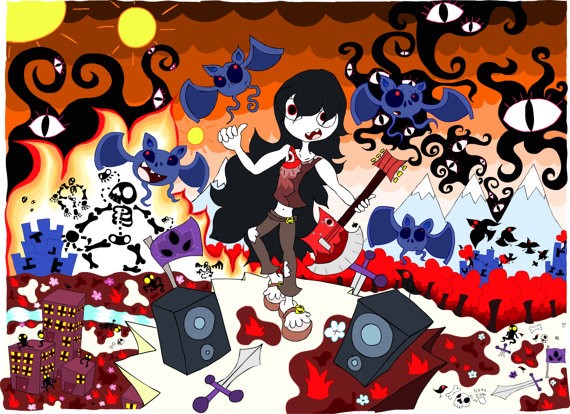 We asked Artist and Writer Glynis Spencer to go along to ‘Mind, Matters & Monsters’ – An Exhibition by Louis Morel in London to review the exhibition. Below you can read her thoughts, but you only have until 24 June 2016 to visit the exhibition! “The venue for this Exhibition is a small Gallery, within the Croydon Clock Tower. Both West and East Croydon Main Line Railways stations service the area. Croydon is a vibrant place and I visited the exhibition for the Private View on 7th June. The entrance isn’t instantly evident, if you don’t already know the venue but, it is located in the basement of the building, to the right of the Clock Tower.

The Gallery is small, on an accessible raised area, adjoining the Café. Many attended the Private View and, at first, I thought gaining access to the artwork would be difficult; such was the enthusiasm of the attendees. When I finally managed to edge my way to the front, I understood what the excitement was all about. The majority of the work was roughly A3 in size, mounted in A2 size frames. About half a dozen pieces were smaller and were in approximately A4 in size. Louis, who suffers from Asperger’s Syndrome, uses a digital painting package to make his art. He draws directly into the program and then prints the work out as Fine Art Giclée digital images. All of the work was of a Limited Edition and mostly of a print run of 50.

The piece, which caught my eye first, was the image used for the Invitation to the Private View and is the largest piece, in the Exhibition, ‘Party in the Post Apocalypse’. I had only seen this work as a small image on the computer. Although I had looked at the image quite carefully, it was a surprise just how detailed and complex the image is. I suspect that anyone who is lucky enough to buy a copy of this piece will continue to find new and exciting elements for a long time to come. I think that, because of Louis’ condition, not all of the elements are as immediately evident to the less gifted of us. The more I looked, the more of this imaginary world emerged. I don’t know what inspired Louis to paint this image and, from a recent radio interview with Louis, it appears that he doesn’t know either. He said that it was impossible, with the current state of his condition, for him to travel and visit places that most of us take for granted. However, despite the sensory overload that the world subjects Louis to, he does like reading books and experiences other parts of the world in that way. Louis likes music, computer games and reading.  He creates animations and, if you look into ‘Party in the Post Apocalypse’, you begin to see some of Louis’ world. The central focus is the young Rock Star, with his Picassoesque Electric Guitar. There are skeletons, no doubt of those who have succumbed to the tragic events and never quite made it to the party. Bats are a recurring feature in many of Louis’ works and hover, like a group of backing singers, around the young musician. At his feet are swords, remarkably familiar to anyone who has played Batman, Dark Messiah, Overgrowth, Jedi Knights etc. The doomed high-rise buildings of the world are unusually small in the image, as are the snow-capped mountains. I wondered if this was because, although Louis can access the world of animation with relative ease, the ‘real world’ is less accessible to him. That world imparts far too much information, resulting in physical pain. Nevertheless, all of the elements of the world either have or are likely to feature in Louis’ work at some time. Many of Louis’ images use dark colours, but they are not depressing. ‘Bats’ is such an image and one of my favourites. This surprised me because, I don’t feel very comfortable with bats, but the playful creatures that inhabit the world Louis has created are in no way threatening. The ones whose faces you can see clearly, appear somewhat confused, as they hover over a rather ramshackle castle, whilst black butterflies seem to be ‘buzzing’ them, like insect versions of Jedi Force Landspeeders.

Despite the limitations on Louis’ access to the world, he manages to create vibrant and amusing scenes. ‘World’ encompasses the land and combines the sea and the heavens. The colours of this piece range from the brightest chrome yellow and aqua blue to the deepest indigo and through to black.  Magical creatures inhabit the scene and are seemingly as much at ease in that world as the human occupants. The art of Louis Morel is not confined to the printed image. Louis is a Youth Patron for the Charity ‘Ambitious about Autism’ and has produced an animated video entitled ‘The World through Louis’ Eyes’, which is available on YouTube.  In a separate YouTube video, Louis gives an interview, ‘Louis Morel talks about Autism’, in which he describes what it’s like having his condition.

Despite all the challenges Louis faces, his work is accessible and in no way depressing. It is a unique vision of the world and the thought processes of a young and very talented artist. He is generously donating 50% of the proceeds from the exhibition, the Etsy sales of those prints and the profits from sale of his book ‘A Slice of Insanity’ to ‘Ambitious About Autism’. It is one of Louis’ aims in the future, and if he can make a success of his work, rather than just being perceived as ‘that Artist with Asperger’s who raises money for an Autism charity’,  Louis would like to help support people, that he feels also face great challenges, in areas such as lack of access to clean water. His kindness and consideration to others is inspiring and a credit to his determination to achieve his ambition of helping others, through his art.”

More information and directions to the gallery can be found here.