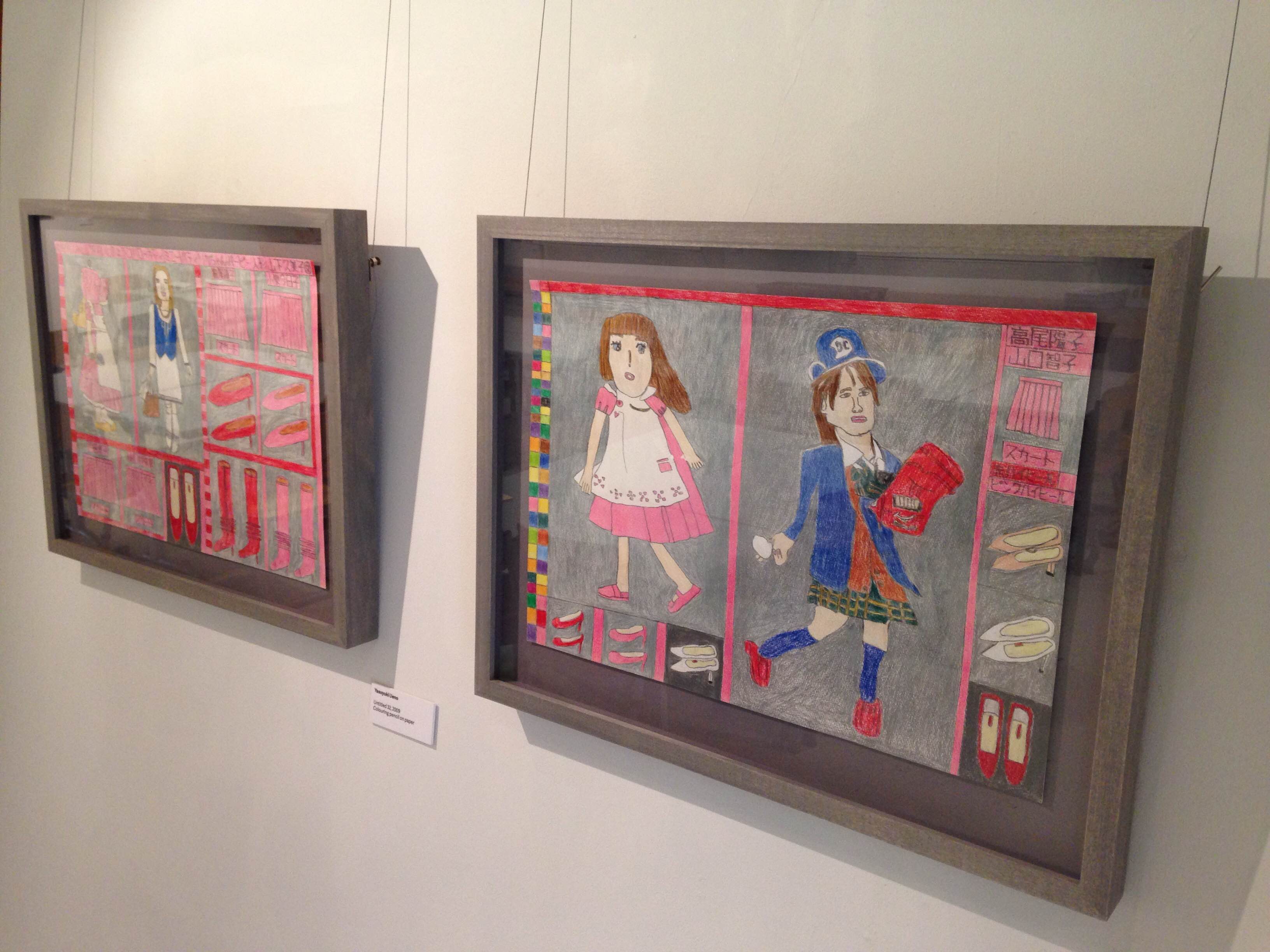 Outside In’s latest exhibition Nama Āto: Japanese Outsider Art opened last week at Pallant House Gallery, Chichester. The exhibition features work by Koji Nishioka, Makoto Okawa and Yasuyuki Ueno, three artists with learning disabilities whose original and raw artwork is being presented in the UK for the very first time. The artists have each been supported by Atelier Corners in Osaka, Japan, a dedicated social welfare facility helping disabled artists to realise their potential and express their individualities.

Koji Nishioka has been interested in music since he was a baby. As a child, he was sensitive to sound, and would stop crying if his parents played him a classical record. Many years later, a piano was donated to Atelier Corners which ignited his earlier interest in music. This is when he began creating his series of ‘music score’ art works. He has created over 200 of these drawings, which are highly regarded in his native Japan and internationally. Koji will copy directly from an existing music score, meaning all of his works are related to actual pieces of music; although they may not be easily read by a piano player. As Koji’s astigmatism worsens in his left eye, the compositions of his musical score drawings move further to the right. Before his death earlier this year, Makoto Okawa’s focus for eleven years had been the creation of his ‘Makoot’ (interesting doll) works. Made from felted wool, the dolls are 3D depictions of happiness, anger, sadness and pleasure.He was taught the felting technique by Atelier Corner’s support staff, but he took the skill into his own hands, instinctively working with the materials. Makoto also produced works on paper, with his choice of creating either 2D or 3D works often dependent on his mood or his health. His 2D works were inspired by his memories or imagination and sometimes feature images of his ‘Makoots’. A selection of ‘Makoot’ dolls made by Makoto Okawa

Makoto died on 15 April 2016. Of his passing, Takako Shiraiwa, President of Atelier Corners said; ‘We all feel that Makoto is still with us at Atelier Corners because his ‘Makoot’ dolls are by our side. Although he had difficulty in communicating with words, his outstanding artistic sense was gifted from heaven.’ Yasuyuki Ueno loves pretty and Kawaii (cute) things; for example, his favourite colour is pink and his favourite character is Betty Boop. In 2007, Yasuyuki subscribed to fashion magazine Vogue, finding himself inspired by their fashion images, commercials and other content. He sometimes copies straight from the piece that’s inspired him, but the composition changes as he works on it; adding in his favourite names, lipsticks and shoes. In his work, Yasuyuki is particular about the gestures of fashion models, their clothing and the colours they wear. He will repeatedly experiment by drawing and re-drawing lines and painting several layers until he is satisfied with the finished product. Yasuyuki has a strong sense of beauty. For him, beauty is symbolised by women and the fashion items they wear. All three artists have work in the ABCD collection in Paris, France, and have had work exhibited in Japan, Los Angeles USA, Prague and Paris.

The exhibition is at Pallant House Gallery, Chichester, until 29 August 2016. It will then tour to the Unlimited Festival at the Southbank Centre, London and Tramway, Glasgow. The final stop on the tour is Attenborough Arts Centre, Leicester.

This exhibition is supported by Unlimited (delivered by Shape and Artsadmin); celebrating the work of disabled artists, using public funding by the National Lottery through Arts Council England with additional funds from the British Council.