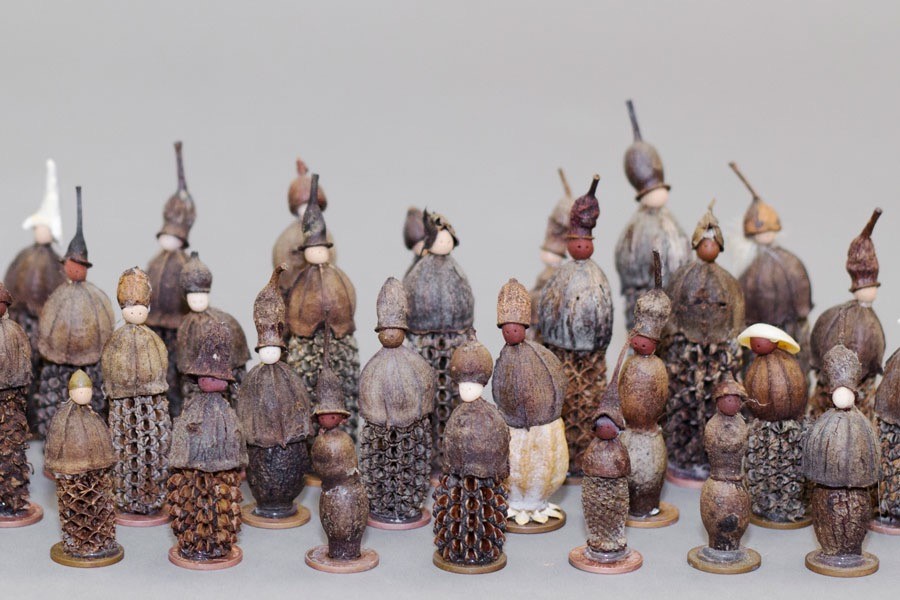 Earlier this summer, Outside In artist Sarah Watson attended a guided tour of our Radical Craft exhibition led by Outside In Manager Jennifer Gilbert Pallant House Gallery in Chichester. We asked Sarah to share her thoughts on the experience for this week’s blog post. Radical Craft: Alternative ways of Making is now showing at Oriel Davies Gallery in Newtown, Wales and will continue to tour the country until late 2017.

What are we talking about ?

We were at Pallant House Gallery, Chichester and we went to see the Radical Craft exhibition, which I thought was ‘alternative art’. Artists used different materials and the artists came from different parts of the world like Denmark, Japan and Germany and of course the UK.

The building was quite nice but a little bit intimidating but I have been there before. From a working class point of view it’s quite posh. I didn’t know if I belong there. When I went into the courtyard I discovered the colourful knitted things on trees. I wanted to take them home! I liked the show part and how Jennifer talked about some of the pieces, which was great but I would have liked to know a little bit about ALL of them! I really liked hearing about their stories rather than reading about it.

The pieces I liked the most

There were a few I liked, for example the pencil carvings by Dalton Ghetti – they had shapes and each one took a long time. One false move would ruin the art! I also loved the glass work- it was very gothic and the story was fascinating. And then the Danish artist who invited people to his house to show them his artwork and he liked to socialise. He is very artistic in what he was wearing and he looked proud. He liked working with wood. He made his own clothing from woven wood and he used it inside his house.

I thought the first Judith Scott piece was the best, the one that had a wedding ring hidden. It was worth a lot of money. How did it make me feel?

It made me feel curious and left me wanting more. I remember the small nut people – they remind me of Gulliver’s Travels.

I like that when an artist can’t stop – like in the assemblages always adding things to it. Some of the works were a little the same – like the wrapping up.

It opened my eyes to what radical ideas are.

It opened my eyes to other people and how they make art when they cannot talk for example.

Not everything appealed to me but it is always good to see a variety of artwork. It is good to see disability arts in a major Gallery.

I wished they would put more Outside In artists in the gallery and include drawings or photography next time.

Radical Craft: Alternative Ways of Making is a Craftspace and Outside In touring exhibition. The exhibition, which is co-curated by Laura Hamilton, showcases artworks by historically renowned artists associated with Outsider Art and contemporary self-taught artists who see themselves as facing barriers to the art world for reasons including health, disability, social circumstance or isolation; 20 of whom were selected from open submissions.

The exhibition is at Oriel Davies Gallery, Powys until 29 August 2016. The tour will then continue to the following venues: