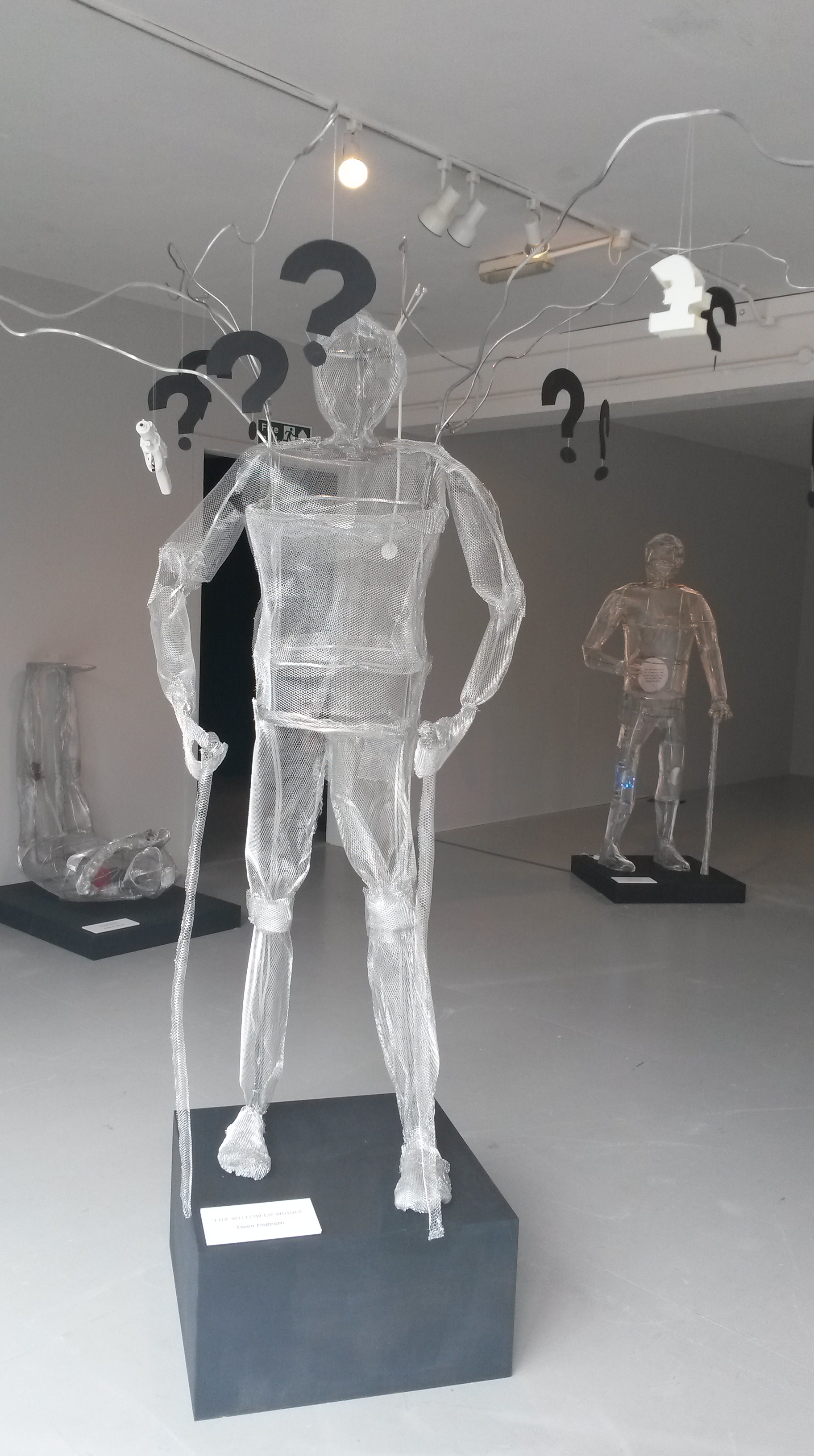 In this week’s blog post artist Lisa Buttery reviews The Art of Recovery, an exhibition of work created during a four-week partnership project between Phoenix Brighton and The Royal British Legion’s award-winning Bravo 22 Company.

I walked to Phoenix Brighton on a sunny Friday afternoon. Phoenix is an artist-led arts organisation and comprises of a gallery, studios and an arts education programme, the building is not hard to miss and there is always something going on there.

The show was created in partnership with the RBL, the Drive Project and Phoenix Brighton, led by sculptor Al Johnson and supported by mentor Stewart Hill. The Royal British Legion’s Bravo 22 Company uses the arts to help improve self-awareness, confidence, self-esteem and motivation for wounded, sick and injured personnel, veterans and their families in their paths of recovery. The pieces were created over a 4 week course by a group of Bravo 22 members and the smaller plaster sculptures created over 2 workshops by older veterans with limited or impaired vision.

As I walk into the gallery I’m instantly struck by the life-size scale of this collection of sculptures. The room is filled with human shaped metal sculptures and I begin to move quietly around the space to be greeted by these people made of aluminium wires and mesh. In one corner there are the smaller, beautifully sculpted figures that have been created by blind veterans and at the back of the room there are 2 more areas, one showing a film of the artists speaking about their work and experiences creating it and another where you can have a go at creating your own small sculpture with the same materials used in the life size sculptures.

The first piece to capture my attention is a piece entitled Incarnadine by Clem Boland, a sculpture that floats uncomfortably, arms spread, suspended in mid-air. The piece explores a deeply traumatic experience and the artist’s struggle with PTSD. It depicts an Afghan man he carried and saw die on his first patrol. Contained within the sculpture is a poem expressing Boland’s feelings around the experience. The piece is an incredibly raw and moving message of the horrors of war and speaks powerfully of the damage inflicted on both victims and perpetrators. Behind, stands a piece named the willow of worry by David Pegram. The figure has branches spanning above his head with symbols of worry, including money, health and housing, hanging off of them. In the film Pegram, speaking about his sculpture, tells of how a strong enough gust of wind can severely damage even a solid tree and that the branches express emotions that stem from within. This piece speaks clearly of the wide reaching impacts of the artist’s injury and the uncertainty surrounding his future. I move back to the front of the gallery towards another 2 standing pieces, one entitled Imbalance by Maurillia Simpson, a precisely crafted figure with the left leg and left side of her torso missing representing Simpson’s injury which means that she has very little feeling and movement on her left side. It speaks to me of strength and resilience, the simplicity and elegance of the design are striking and although the figure looks imbalanced, she stands tall and proud. The next piece is titled Alive by Stewart Hill and is quite the contrast to its neighbour, a large imposing skeleton armature encased in a mesh skin, arms outreaching with many different details and writings partially visible beneath. There is a ball and chain attached to his ankle, a brightly coloured disk within his chest and an arrow-like wire through the head. I then moved to the smaller sculptures and was captivated by the detail, movement and flow of them. These delicate looking sculptures are so expressive, 6 of them standing in a variety of poses and one piece including 3 figures sat together around a fire, drinking. On the wall behind, there are some photographs from the workshops so you get a better feel of the process that led to these gorgeous sculptures.

The next large sculpture I spend time with is Grounded a combined design by Douglas Adams and Sarah Seaman. One figure is kneeling, looking up to and grasping the others leg as he floats up away from reality, looking backwards. This joint sculpture was particularly powerful to me, it explores the artists’ partnership and daily lives after trauma and chronic illness. Their strength, love and commitment to each other are clear to me when I look at this piece. Douglas describes how his partner and dog are a grounding presence as he takes steps forward recovering from PTSD. The next piece I greet is Invisible to You by Sara Howarth, a figure curled over on its knees, head in hands and brain with a metal plate visible through her transparent sphere of a head. She is knelt in a blue pool of small glass bottles, each containing a slip of paper with challenges that she faces written inside. In this piece Sara courageously explores the difficulties of having a hidden disability and the struggle that’s usually hidden is painfully evident. I move to her neighbour, a piece called Lightning by Dan Phillips, another imposing upright figure giving me a thumbs up with one arm, leaning on a cane with the other whilst a blue flash of pain continuously pulses through his right leg. This piece speaks strongly of how he puts on a brave face despite the hidden pain of his injury. Invisible to You by Sarah Howarth. Photo credit Lisa Buttery

The last piece is more mysterious to me than the rest, An Illusion Elsewhere by Stephen Shaw looks uncomfortable with one arm covering his face and the other laid over his chest. He’s laid on his back with legs flat against the wall. Visible through the mesh skin are various red wires and patches, I can also see what I presume to be a heart in his chest. Next to the figure is a framed photograph of Shaw and a friend, with a dedication to him. I feel very emotional spending time with this piece. I sense that there is much hidden pain and distress behind it. Images and materials from the project. Photo credit: Lisa Buttery

The exhibition was an emotional, humbling and powerful experience. I spent a long time there both admiring the work and creating my own small wire sculpture which helped me better appreciate the true level of skill that all the artists have demonstrated. The strong messages of hidden disability and pain were conveyed beautifully by the group, most of whom did not previously consider themselves to be creative or artistic.