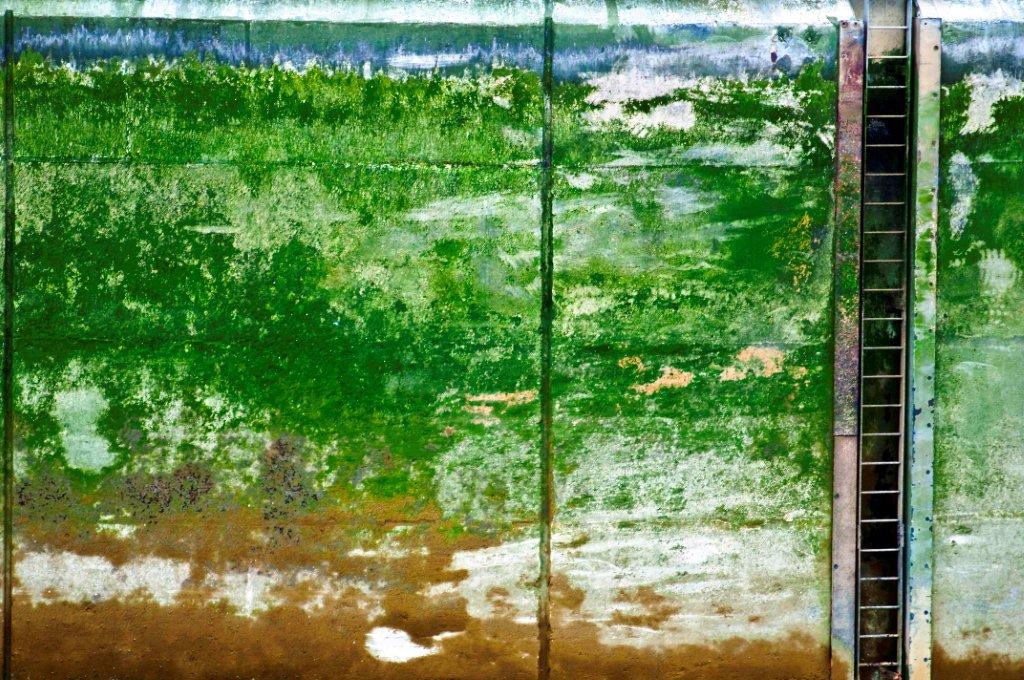 The Gallery of Everything opened in London in September 2016. The latest incarnation of James Brett’s Museum of Everything, it is described as London’s first commercial gallery dedicated to non-academic artists and private art-makers. For this week’s Outside In blog Cathy Ward visited the gallery’s inaugural exhibition, Jarvis Cocker’s Journeys Into the Outside.

The Gallery of Everything, works by Howard Finster in the window

The Gallery of EVERYTHING Presents: Jarvis Cocker’s JOURNEYS INTO THE OUTSIDE

Journeying from the outside world into the inner world of EVERYTHING, the gallery is neatly housed in a space once known as Mario’s Barber’s. A place where accumulating experiences were clipped away, dusting the aged interior in a confetti of male life markers. It is a perfect and characterful environment to introduce the works by 7 extraordinary men who carved their place in the universe by creating their own. Some public and inviting, others hidden and forbidden. All possessing an overwhelming compunction to be their own masters against the onslaught of a world ordered by others.

This inaugural exhibition by its director James Brett has showcased rarely seen works by these artists introduced in the 1998 television series “Journeys Into The Outside” directed by Martin Wallace and presented by poptasmic Pulp musician, Jarvis Cocker. Encounters were often as surprising and unprescriptive as their maker’s creations. To watch these interactions 18 years on, has added valuable insight into the artists minds and commands respect for their sheer will and unyielding character.

The gallery visitor is greeted by Folk artist Howard Finster’s portraits on bedsteads of Abraham Lincoln and George Washington. These homespun heroes of American fable and aspirational dreams stare into infinity from their iron fields. Lining the walls are a host of framed and figurative works from Finster’s ‘Paradise Garden’, originally created over 4 acres including his house, as an abundant multi-textural canvas where nothing was spared the touch of the Reverend’s hand. Art was a powerful faucet directing his utopian visions and moral beliefs. My favourites depict almost creationist scenes of animals from the Dawn of Time living harmoniously within the world of Man.

Sentinel life sized mosaic and smaller cloth figures by Nek Chand from his magical “Kingdom of Gods and Goddesses” also grace the entrance. A man with no training in art at all, he achieved one of the greatest testaments to personal vision and determination in secretly transforming a cities wasteland into a vast populated wonderland of his imagination with recycling and unwant. His ‘Rock Garden’ environment in Chandigarh now the second most visited destination in India, and he’s regarded as one of the most cherished and celebrated artists. Nek viewed his art humbly as ” About something that’s in everyone”.

Through the gallery towards the far end room, stands a simple, heavy carved chair. A hidden inscription across its back reads Amor et Dolor (Love and Pain). This solitary seat was once owned by a partially paralysed, deaf and speechless, French priest, Abbé Fouré, the Hermit of Rothéneuf.  For 16 years, dressed in hat and cassock, toiling with elements of Heaven, Earth and Spirit, Abbé hewed out the local granite headland with a simple hammer and chisel.  This chair, his vessel of contemplation, was where he sat to consider his hundreds of excavations of intertwining mythic creatures and local Breton heroes in their eternal struggle of conquest and salvation. For me, seeing this was a true wonder in the exhibition.

The back parlour gallery with its nostalgic touch of lace curtain and fireplace, period table, and vintage photograph of the original interior of Mario’s Barber’s was like stepping back in time, and gave the room a lived-in homeliness which offset the works by Karl Junker and WC Rice. A small screen above the mantelpiece played edits from Jarvis’s foray into the artists worlds. This was helpful to appreciate the import these works once held together, now separated from the makers’ environments.

Karl Junkers architectural marvel I have been in awe of, but seldom seen individual pieces from his home the Junkerhaus.  This piece emanated a powerful presence with its gnarly hand carved, almost medieval style frame surrounding a darkly luminous icon-like painting. It was simply exceptional. Junker “Drew from a palette of the world inside his head”‘ and the Junkerhaus was his life’s work.  A complete labarynthal piece, an extension of his self and his schizophrenic mind. Drawing on a myriad of architectural styles, he ceaselessly carved and created, perhaps to block out the loneliness real or imagined. His was a private, solitary and sacred space and one I felt uncomfortable seeing anyone in. “Perhaps only after a hundred years I will be valued correctly” prophetically this is true. This painting alone is a masterpiece.

Between Junkers art and the video excerpts from Journeys Into The Outside Sprawl a selection of crude hand made crosses and metal signs by self ordained Minister WC Rice (William Carlton Rice) These pieces originated from hundreds he had made since 1976 in Prattsville, Alabama. A prodigious stakeout of zealot prophesies for the passing motorist or those on a pilgrimage to meet him amongst his ‘Miracle Cross Garden’ warned that Hell was for the majority and Heaven the minority and what lay ahead in the hotness of damnation, he daubed in red paint “The colour of Jesus’s blood”

The sole painting by St EOM (Eddie Owens Martin) hung at the top of the stairs and was regrettably hard to see. An unmissable multi coloured portrait head with its signature cone hair and funky vibe. St EOM created the psychedelic compound ‘Pasaquoy’ in rural Georgia. The name handed to him by spirits and interpreted to mean “Transmitting the past into the future” His compound was a blend of occultist, counterculture, pre-Columbian motifs and mythic symbolism… and funded by palm reading. Attaining higher consciousness was aided by a lot of pot and a self-styled vertical hair cone antenna. His cult of hair was also expressed in the large polychromatic phallused figures, which he hoped would impart longevity and virility.

The two floors are linked by a curved, but steep, wooden staircase straight out of a looking glass tale with a thousand feet of use. I felt like it bridged time.

Below were works by Chomo (Roger Chomeaux) a complex and exceptionally skilled artist. “Guided by cosmic forces” he created ‘The Realm of Preludian Art’ near Fontainebleau, France. His art a constantly evolving progression melding spirits, energy, and matter with themes of apocalyptic destruction, history and mythology. In virtual solitude for over 50 years he devoted his life to creation “I do not create to sell, I create to astonish myself”.  Here, tightly arranged in the modest gallery space were several genres of his work. Standing dramatic carved, burnt and painted wood ‘Totems’ made me imagine Mans’ anxieties relating to science and machines post World War II. Beside them, were sensual carved works as skilled and as convincing as ancient pagan goddess’ deities from an alternative Museum of Mankind. These were well placed & arranged in lines lit by natural daylight from the industrial grid of the old street glass above. The walls hung with vibrating ‘Heads’ and ‘Mutant’ paintings.

Chomo, a man renowned for his short fuse and intolerance to company, especially film crews, didn’t take to Jarvis’s “F*** wit Cinema!”. A reminder of the fateful, irritating encounter repeated daily beside his presence, was amusing and a little ironic.

Like a time tunnel back to 1998 Jarvis’s programmes played in a small vaulted space peeping back into the late 20th Century where he pluckily tries his luck with the guardians of their kingdoms, hoping a Grail to Enlightenment would be revealed.  Further back in time, my own quest to discover other dimensions was aided by encountering the first Outsider Artfair. In what felt like a grotto of wonder, amidst the frozen city were creations id never seen before, nor since. As work disappears into private hands it makes any document of these artists within their own environments precious. When works are removed from their context it’s like removing bricks from a house, they tear holes in a structure. Fortunately there are now more Institutions and collectors bringing these works back together and importantly to the public view. This exhibition is an impressive selection of some of the most noteworthy artists in a venue well suited to its purpose. It is also possible that there won’t be another chance to engage with these rare and singular works, and for that fact alone this was a vital show.

Update:
Jarvis Cocker’s JOURNEYS INTO THE OUTSIDE is extended through to January 1st 2017
A re-curated show will place focus on the environments of Nek Chand and Chomo.

An additional bespoke space in the gallery will be dedicated to the life’s work of ice-crystal photographer WILSON SNOWFLAKE BENTLEY.

The installation will be the first significant exhibition of Bentley’s work in the UK. It will include original glass plates, alongside snowflakes, ice crystals and frosts.