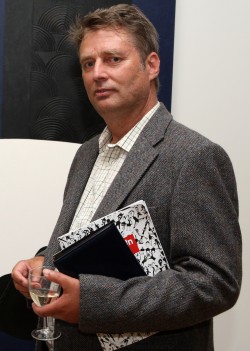 Longtime supporter and Outside In artist Stephen White sadly passed away earlier this year. Here, director and founder Marc Steene shares his memories of a gentle man and generous man who helped to shape this charity in both life and death.

Stephen had been involved in Outside In from its beginnings, sitting on the original advisory group and providing important advice as to how the project should be developed and always from the artists perspective.

He once sat on a panel with me at Tate Modern, alongside the art historians, Roger Cardinal and Colin Rhodes, on the subject of Outsider Art.
I remember Stephen asking what is an outsider artist and was he one? It was a question he tussled with and was also the subject for his BA Hons dissertation. I don’t think he ever came to a conclusion, but he wanted more than anything to be recognised for his art and to be inside the wider art establishment.
Stephen admired Frank Auerbach and his expressive pairings, both in paint and digital, echo the passion and love of form found in Auerbach’s work. He would paint landscapes, still lives and self portraits, but his passion was for Venice which he got to visit later in life.

He was much loved by all who knew him, a gentle man who encouraged others and will be much missed by all at Outside In and me personally.

Stephen generously left a bequest to Outside In in his will and some of his paintings. We will look to acknowledge him in our future programmes in a suitable way so that his memory can live on in the charity he gave so much for.

If you would like to find out more about Outside In or would like to discuss a possible legacy please contact Marc Steene at Marc.Steene@Outsidein.org.uk or on 01243 770835.

Alternatively, more information about other ways of supporting Outside In can be found on the Friends and Patrons scheme and Stephen’s gallery.