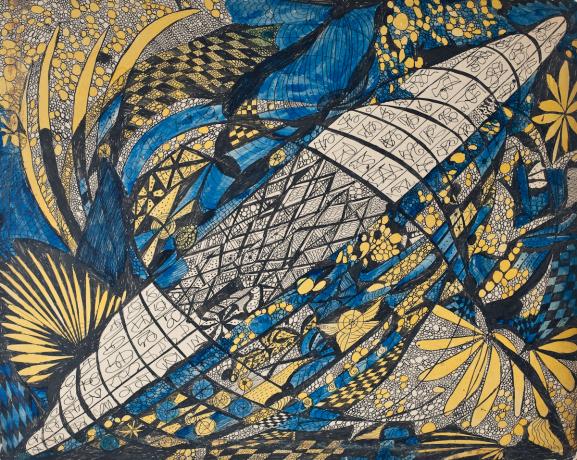 With no training and no aspirations to fame, Madge Gill produced thousands of ink drawings during her lifetime. Her work remains an enigma: is it true she was inspired by an ethereal spirit guide? Was she genuinely in touch with 'the beyond', or was art-making a form of self therapy?

Orleans House Gallery invites you to delve into the world of Madge Gill (1882 – 1961) in this major retrospective exhibition supported by the Wellcome Trust. Featuring over 100 original artworks, and contextual photographs and documents, this exhibition is the first of its kind. Madge Gill was championed and collected by Jean Dubuffet, who coined the term ‘art brut’ (raw art), the precursor to the term ‘Outsider Art’. Gill is considered the most important, influential and recognised
British woman ‘outsider artist.’ This project explores Gill’s work, history and psychic / mediumistic context in-depth, in order to question the use of such terms, whilst celebrating the benefits of creativity for wellbeing.

Working mainly on paper, card and textiles, Gill used pen to create maze like surfaces with a glittering, almost hallucinatory quality that often reveal a female face. Ranging from postcard size to over 10 metres long, her work immerses the eye in a dark world of mystery, beauty and obsession. Her work has been included in previous Orleans House Gallery Outsider and Visionary art exhibitions, the Tate Gallery, and more recently at the Whitechapel Art Gallery, Museum of Everything and Nunnery Gallery.

The focal point of the exhibition will be The Crucifixion of the Soul, which has not been on public display since 1979, and is Gill’s most important work. Over ten metres long, this immense calico is inscribed with Gill’s finely wrought doodle-like drawings and is testament to Gill’s commitment to creativity.

The project has been generously funded by a People Award from the Wellcome Trust. Curators have worked with psychologists, medical historians, biographers, art historians and art psychotherapists to bring different approaches to Gill together within the exhibition and accompanying catalogue. Present day artists from the Art & Soul group, who celebrate mental and emotional wellbeing through the arts, are also represented in the project.

Bringing together little-seen loans from the Newham Archive; the College of Psychic Studies in South Kensington; the Henry Boxer Gallery and other archival material and artworks from private collections, this exhibition is a must-see for all those interested in art, psychology, spiritualism, social history or all of the above.

Madge Gill: Medium & Visionary is curated by Mark De Novellis in collaboration with Henry Boxer, Roger Cardinal and Vivienne Roberts. The accompanying catalogue, Madge Gill: Medium & Visionary will be available from the gallery shop. The exhibition will also coincide with a new biography on Gill by Roger Cardinal, a book of Madge Gill's mediumistic drawings on postcards by Henry Boxer and a roundtable event on November 16 2013.