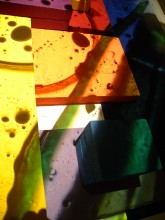 There are still several regional Outside In exhibitions open across England and Scotland that you can pop along to, see some incredible and powerful art at, and perhaps make some purchases!

The first part of Outside In: Scotland is now open at Perth Museum & Art Gallery until 1 November. It features many artists from across the whole of Scotland as well as featuring a range of different art forms. The artists and venue details are here: http://www.outsidein.org.uk/Outside-In-Scotland-2013

Outside In: Milton Keynes opens on 6 September until 29 September at MK Gallery's Project Space. This exhibition features the work of four artists and one group piece: http://www.outsidein.org.uk/Outside-In-Milton-Keynes

Outside In: Central is still on-going at Compton Verney until 15 December 2013. There is a Curator's tour and opportunity to meet one of the artists on Thursday 19 September at 2:30pm and a second Curator's tour on Thursday 17 October at 2:30pm. For more information please visit: http://www.outsidein.org.uk/Outside-In-Central-2013

Finally, Outside In: On Tour is open in its third venue – Salisbury Arts Centre – until 29 September so do pop along if you haven't seen these works yet: http://www.outsidein.org.uk/Outside-In-On-Tour