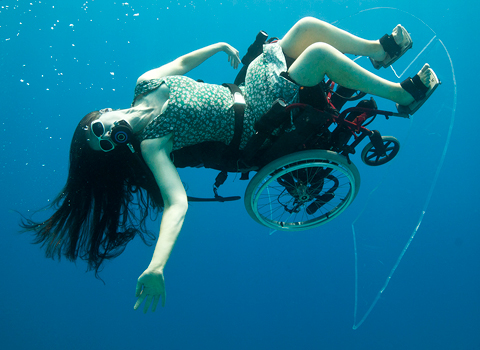 People Like You is a partnership between LinkUpArts, Disability Arts Online and Salisbury Arts Centre and features work by Gini, Sue Austin, Liz Crow, LinkUpArts and other artists.

People Like You is a purposefully participatory new touring show that tackles the subjectivity and perceptions of disability.  Through performance, film, sculpture and audience interaction, it explores commonalities of human experience and conjures some very uncommon experiences of its own.

Gini’s Disability Arts Online commission ‘Creatives in Con.text’ digests conversations into multi layered text works. The title piece is formed of functional grab rails.  Gini explains: “First offered to me by a man who followed it up with “…should be taken out and shot”, ‘People Like You’ is an enigmatic phrase made even more interesting by social media trends. [grab rails] are everywhere, often taken for granted….  I chose Shocking Pink to counteract the drab, unisex nature of the paraphernalia of disability.”  Her other pieces include life size Soft Sculptures and ceramic collaborations.

Liz Crow reveals the hidden realities behind the public life of many disabled people with the deeply personal exposé, ‘Bedding Out’.  During a continuous 48-hour performance she will be in bed in the gallery space, holding conversations with visitors in person and via Twitter.

Sue Austin’s ‘Creating the Spectacle!’ has been described by the Telegraph as ‘One of the most compelling images of the [2012] Games’.  From 10 – 14 April, she will present an immersive installation filmed under the Red Sea, celebrating the wheelchair as a tool of freedom and creativity.  Both Liz and Sue’s installations will be present in different formats throughout the show.