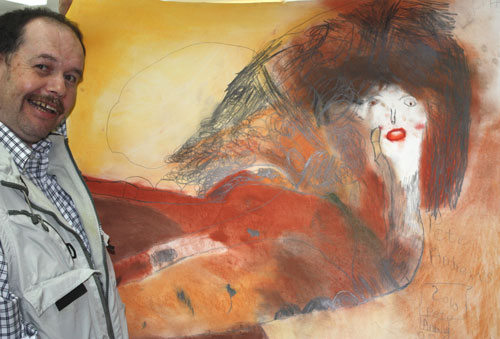 Peter turns 50 in July and has attempted to do many different things in his life, but until he started with The Arthouse Meath in October 2005 nothing captured his imagination.

Here he found he had skills and was able to express himself through his art and started to believe in himself, over the past four years Peter has sold works at many different shows.

His work is unique and beautiful.

Peter was one of six award winners from last years Outside In exhibition for his piece ‘My Interpretation’ as part of his award he won the opportunity to have a solo show at the Gallery.

This is a huge event for Peter and The Arthouse Meath, Peter’s confidence has grown since we began but this will really show him that people do accept him for who he is and that people with learning difficulties do have skills that are of interest and worth.

We aim to change negative views and opinions of adults living with learning disabilities and encourage a wider audience to accept the skills rather than the disability.

Peter is extremely proud of this forthcoming show and we aim to make it as successful as possible for him.

To see some more of Peter’s work:

To find out more about ArtHouse visit: www.arthousemeath.com