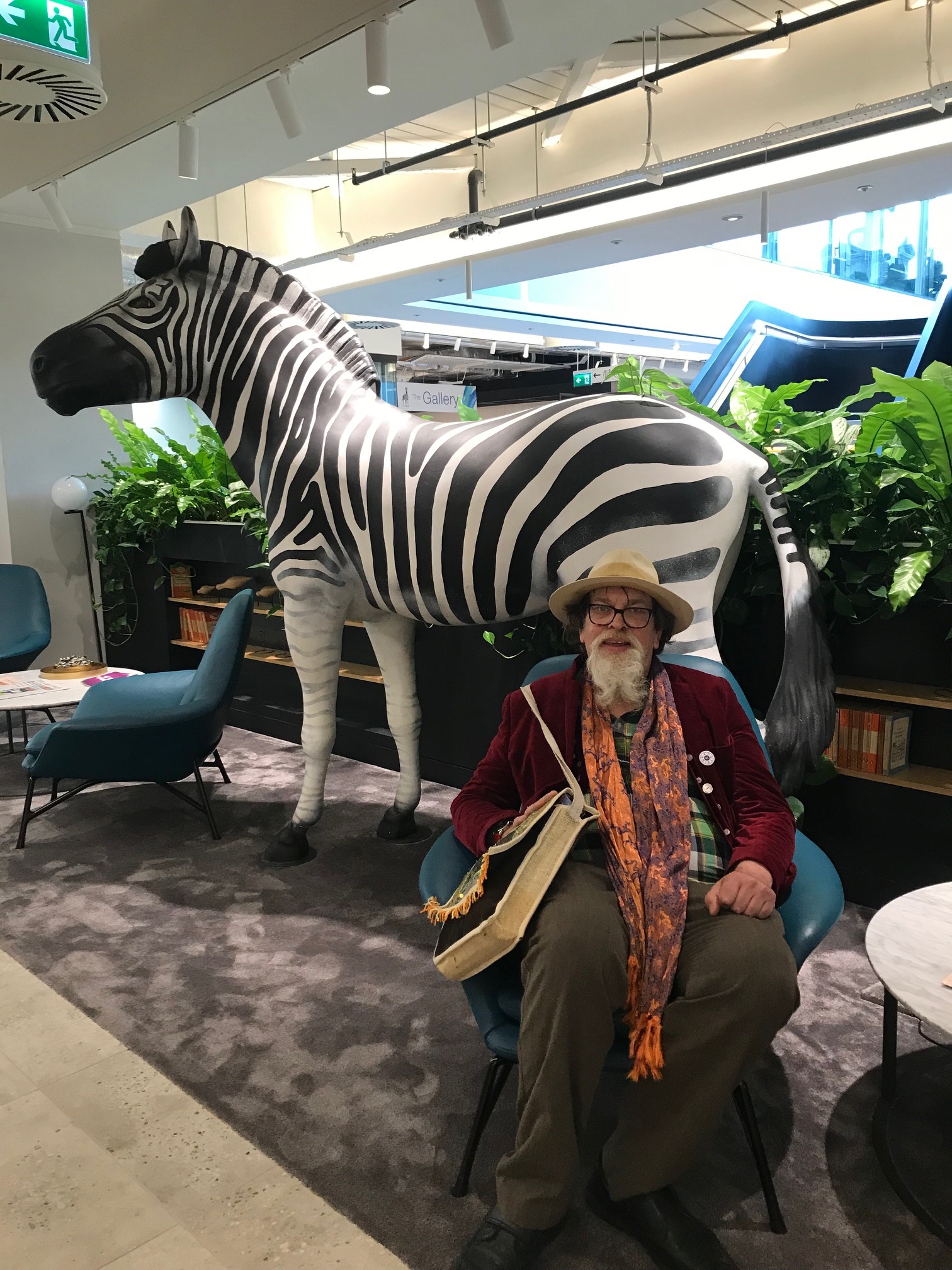 Outside In artist and ambassador Phil Baird shares his thoughts after hosting an artist talk on the life and work of Scottie Wilson for Investec staff at the bank’s London head quarters.

I remember visiting the City, in the 19 sixties I saw hundreds of men in dark suits All wearing bowel hats each carrying rolled up umbrellas and brief cases and hurrying along the York stone pavements as a crowd,,, As was the norm 50 years ago how lucky that things change.

I must admit that the initial response on entering the building a large marble and glass huge modern building was a little, to say the least, Daunting. We were warmly greeted with welcoming people, boiled sweets and one of several white and black, black and white Zebras large models very creative and calming sculptures. Black and white animals represent the wholeness between the opposites.

There is the story about some young school children when ever they went on trips a zebra would appear occupied by two teachers in costume an imaginative magical and suchness performance.

Nice to see several “Outside In” works a large abstract, three related abstracts and an endearing silk screen of a jumping frog and one or two others, It means such a lot and I’m sure to the Outside in Artists that the works have found a little niche were they can live and be appreciated with lots of space and may find their way into collections.

I must admit having been prepared to talk to  A group of  Men Captains of industry  besuited and tie wearing people there was not a bowler hat to be seen although the bias was very much female with aptly a few token men.

The audience came across as being very attentive and interested with what may have be an unfamiliar subject for them, I tried to give some pointers into the work of Scottie Wilson the man and his work that I find inspiring and hope that will carry on to the group of individuals and may have sparked away a small interest into the Art making process and to develop either a making or collecting instinct.

I have enjoyed preparing the talk and spent many hours preparing sections for inclusion of which I managed to include a lot of, if anything was slightly over prepared as would have liked to have engaged more with questions from the audience although after talking for half an hour I needed to be quiet for a while.

Anyways thank you once again to you and Outside In for these opportunities. Best from Phil B.

Click here to visit Phil Baird’s Outside In online gallery

This event formed part of the prestigious bank’s sponsorship of the charity and was designed to share the work of Outside In’s Step Up training programme. Phil has trained through Outside In’s Leading Workshops and Exploring Collections courses, gaining skills in designing and delivering workshops, and researching and interpreting collections. This is the second event that has been programmed for staff at the bank. It follows a practical evening workshop that was delivered by Outside In artist Brian Gibson and focused on Vincent Van Gogh’s portraits and self-portraits.

About Outside In’s Step Up training

Investec announces new two year sponsorship for Outside In