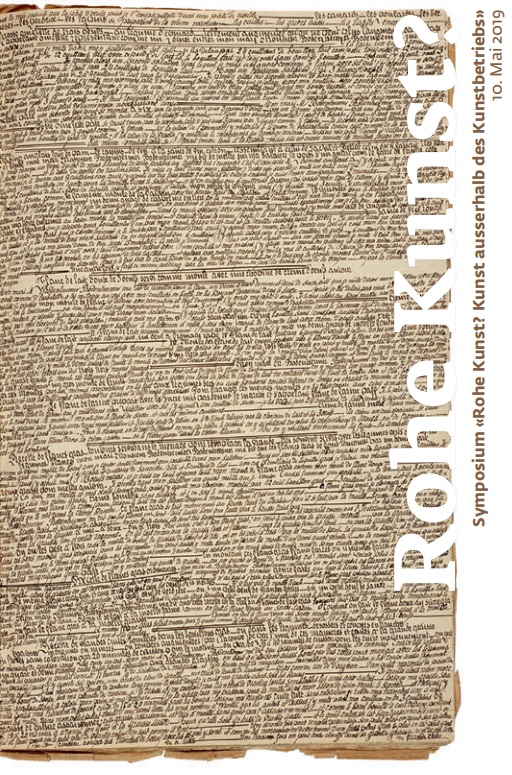 On 9 May, 2019, Outside In’s Step Up coordinator Kate Davey travelled to Zurich for a fleeting 21 hour visit to attend the Rohe Kunst (Raw Art)? conference at the Museum for Design in the city centre. Here she shares her diary of the experience…

It really was a whirlwind trip and, despite my lack of German language skills, the conference proved to be a useful mixture of informative panel discussions, moving film screenings and even a choral interlude from a choir translating the musical scores of esteemed outsider artist Adolf Wolfli.

The conference was informed by an exhibition entitled ‘Extraordinaire!’ which was on display in Thun, about 2.5 hours by public transport from Zurich. The exhibition consisted of art works found within Swiss medical records, as part of a government funded project to bring these hidden works to light. The works all came from psychiatric institutions and were created between 1870 and 1930. As an accompaniment to the exhibition, the conference aimed to bring people together to discuss the merits, questions and concerns surrounding exhibiting patient created art works in public settings.

This project, and the conference more specifically, spoke to Outside In’s current project, looking at cataloguing and describing the Vawdrey Collection at West Sussex Record Office. As part of this project, seven Outside In artists are exploring, cataloguing and responding to art works collected by Dr Brian Vawdrey, a psychiatrist at Graylingwell Hospital in West Sussex between 1954 and 1985. The process has seen questions arise relating to naming artists, exhibiting the works and generally sharing these artefacts with the general public.

The Rohe Kunst exhibition’s first panel discussion asked who is able to have a say on these important questions. Switzerland has a regulated procedure when it comes to exhibiting and viewing works created by those who have been in a psychiatric hospital. The regulations mean that a request has to be made to view and show this work, and if it is used, the name of the artist must be redacted (this redaction can generally be disregarded if the artist’s name has been published before).

However, there are some complications, as Switzerland’s Civil Code states that every citizen has the right to express himself or herself as an author. And people who have experienced mental health issues are also granted the right to this authorship. So as you can see, a dilemma with no obvious answer. The panel was made up of two historians, one Professor of Law, a physician and an archivist. Interesting that there were no artists or persons with lived experience of mental health issues involved in this discussion.

Following this quite intense panel, we had a welcome break in the form of Ensemble Corund performing the musical scores of Adolf Wolfli, then it was straight into two film screenings. The first was ‘There is something in the air’ by Iram Ghufran, a documentary focusing on the use of shrines to deal with mental health issues in parts of India. The second was a haunting art-film depicting an historical psychiatric hospital in Europe.

A panel discussion followed, focusing on the different forms of psychiatric treatment used in patient care. The discussion covered things like whether diagnoses are just changing words and concepts for things that have always existed. Elena Lemke, a historian from Berlin, was inspirational when talking about the need to include artists and people with lived experience in all of these discussions. She remarked that if you wanted to travel to a dangerous country, you would ask someone who had already been, or ideally you would travel with them – and this should be no different in the case of mental health. She also made a really interesting point about how people with lived experience of mental health issues spend their time trying to make themselves ‘normal’ so they can fit in, when we as a society should be creating spaces that automatically make them feel normal. Overall a really interesting discussion about different treatment throughout history with some fiery feedback from the audience.

The final panel looked at how this kind of work fits into the ‘mainstream’ art world. If names of artists are redacted, can they fit into the art world, which relies so heavily on the naming of artists and their work? The discussion covered the rise of ‘outsider art’ in Japan over the past few years and the continuous tug of war over the term ‘outsider art’ and whether we should really still be using it. It was positive to hear the influence of younger people on this field of art, as it seems that the more that younger generations are involved, the more inclusive the arts can be in comparison to the much more segregated, ‘us’ and ‘them’ of the past.

The day finished on a much lighter note, with a presentation from students taking part in the Bachelor of Art Education degree programme at the University of Zurich. As part of the programme, they have been working with art studios across Switzerland in a collaborative way. We got to see some of the work they have been making together, and hear feedback from the students about how they have found working in different settings.

As a jam packed day came to an end, I started thinking about how a lot of this relates to our current work around the Vawdrey Collection, and about wider work we are developing over the next year. It seems that patient created art work is experiencing a period of popularity – and therefore a period of intense scrutiny, and discussions around important issues, ethics and concerns have never been more topical. It was definitely apparent that the work we are doing with artists with their own lived experience through the Vawdrey Collection Project is innovative and unique in a European context.