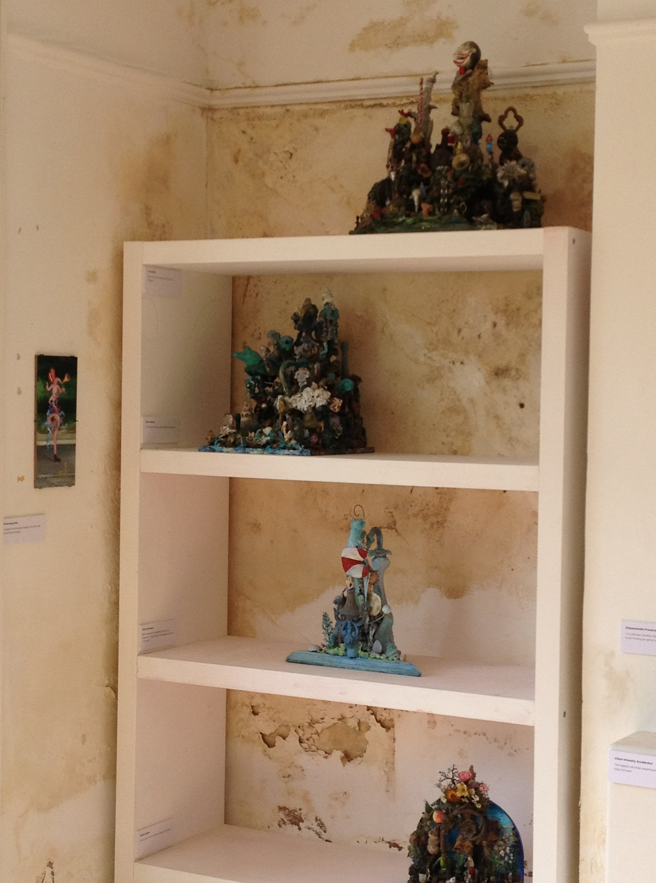 From 22 – 30 June two Outside In artists feature in an exhibition titled 'Overlooked' as part of RIBA's Love Architecture Festival.

Elzbieta Harbord and Ian Sherman will both have work on display as part of the exhibition at artist Christine Finn’s suburban seaside house in Deal (Kent), which is an Arts Council England funded event inspired this year by Outsider Art and overlooked artists and architecture. Both artists’ work will be shown across two sitting rooms, and Ian’s will be accompanied by photographs of his studio taken by fellow Outside In artist, Andy Hood.

Ian Sherman has been meticulously creating assemblages from found objects since 1991, with a total of around eighty now in existence. ‘Fully Assimilated’, selected for inclusion in ‘Outside In: National’, is a piece that was started in 1992, eventually becoming about the loss of individuality. Ian claims his assemblages are never really finished, and continually finds new things to add to them. He says of his work: “At times a curious synchronicity was apparent of found objects turning up at the right moment almost as if instigated by thought.” Ian is also exhibiting a selection of his paintings which feature similar ideas to his assemblages.

Elzbieta Harbord creates black and white installations focussing on narratives around her twin sister who is a nun in a convent in France. Elzbieta works with mixed media including found objects, photography, collage materials, ceramics, acrylic, wax, and watercolours. Her ink drawing ‘Heaven and Hell (Series 3)’ was included in ‘Outside In: National’ and depicts sections of storytelling using religious icons and secular and humorous conversations and illustrations. She says of her work: “The natural organic life, living and dead and the imaginary world play a big part in my art world.”

On Saturday 22 June, both Ian and Elzbieta will talk about their work at 11am and there will be an Outside In: Step Up workshop from 2-4pm run by another two Outside In artists, focussing on self-taught Cornish artist Alfred Wallis. Participants of the workshop will be encouraged to produce works using found objects and household paint that are reminiscent of Wallis’s beautiful sea and boat scenes that are painted from memory with a clarity and simplicity of design.

To further explore the theme ‘Overlooked’, other works exhibited at the event will include pieces on loan from St. Remy-de-Provence, where Vincent Van Gogh was treated, and an installation by Christine Finn inspired by her own visit to the hospital. There will also be a programme of related talks and events taking place throughout the festival. You can find the house at: 58 Golf Road, Deal, Kent, CT146QB

Image: Ian Sherman's work in situ in Deal ready for the exhibition