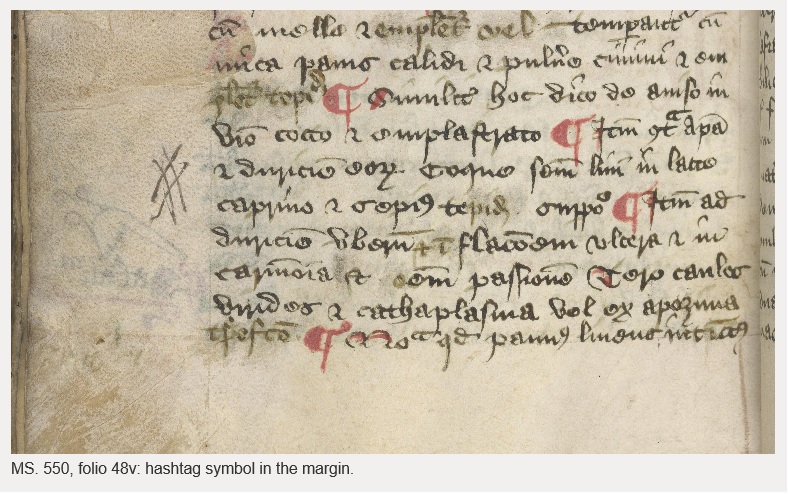 It comes as no surprise that researching texts from the early 15th century will throw up interesting results, but to find early examples of a hashtag has to be unexpected. To coincide with a supported research opportunity at Wellcome Collection for Outside In artists, Laura Miles takes a closer look at one remarkable discovery.

Extract written by Dr Alex Lee, a former PhD student in the Italian department at University College London, who recalls looking at a popular text, by John of Burgundy, about the plague.

“While I was interested in this specific tract, I was also intrigued by the materiality and visual appearance of the manuscript as a whole. It is written on parchment. There were evidently some small holes in the skins used, and there are numerous examples of these holes with smaller holes either side, which would have been made for thread used to sew up the hole. Although none of the thread has survived, it is evident that care was taken to sew over the holes.”

Alex goes on to explain how the manuscript was bound and the margins used for symbols and note-writing, including the use of hands to point to certain section of texts: “The top hand here has quite an elaborate cuff, and actually has six fingers! There’s no reference to a six-fingered hand in the text though, so it’s most likely just a mistake by the person who drew it.

“But margins weren’t just a space for inserting symbols: they were often used as an additional area for writing – summing up parts of the main text, or even adding to and correcting parts of it,” she added, highlighting that different colour inks were used to highlight important passages. 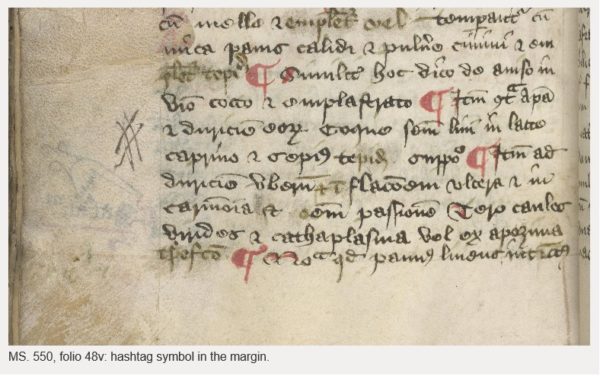 Alex added: “There’s a symbol resembling a modern-day hashtag in one margin, which is probably a more rudimentary form of a manicule, as it’s being used to draw attention to a particular part of the text.

“In MS. 550, I found only one hashtag, but in other manuscripts that I’ve worked with they have been used to mark a particular theme, so in this way they are used in much the same way as on Twitter.”

You can read more from Alex’s text HERE, to find out about the research opportunity with Wellcome, click HERE – deadlines for entry is Sunday, 13 January 2019.