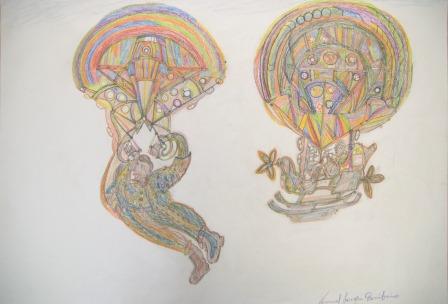 This article was published in Raw Vision Magazine #83, and was written by Roger Cardinal and Kate Davey.

Manuel Lança Bonifacio was born in December 1947 in the Portuguese town of Faro, the capital of the Algarve. Now a busy tourist resort boasting an international airport and a marina, and known for its Ria Formosa nature reserve, it was in the post-war years still a town of modest size, with a fine cathedral and several churches, encircled by ancient walls built by the Moors. Here Bonifacio grew up and began to develop his twin interests, in observing the world and in making pictures. At the age of eight, learning difficulties led to his dropping out of the formal educational system. Instead, he turned to art making, and developed a passion for drawing and ceramics, a passion that has persisted to the present day. In due course, he was able to join the fire brigade as a young volunteer, although his ultimate dream was to become a soldier. His other great loves during these formative years included riding motorbikes.

Bonifacio was in his early fifties when his mother died; his father died a year later, in 2001. As a result, circumstances led him to emigrate to Britain, accompanied by his sister Maria Odone and her family. They took up residence in Cobham, a small town close to Guildford, the Surrey capital.

Manuel Bonifacio is a soberly dressed and polite man who lives quietly in a flat in Cobham. Places, both past and present, are important to him, and he enjoys regular walks of several miles, for instance along the river to Kingston-upon-Thames, during which he will sometimes pick up discarded materials to incorporate into his work. He takes great pleasure in visiting art galleries and museums, such as the G. F. Watts Gallery or Hampton Court, usually accompanied by his sister, some friends or the ArtVenture studio group. Such trips often provide inspiration for his own pictures. He still cultivates a habit dating back to childhood, when his parents encouraged him to jot down street-names and to sketch buildings in a small notebook. He once put his situation plainly: “I like to walk and look around, looking at buildings”. Illustrating this, one of his larger drawings depicts a statue that stands in the High Street of Cobham.

It was in 2009 that Bonifacio enrolled at ArtVenture Trust, a multimedia art school in Guildford. It functions as a non-profit-making charity and runs art-making sessions in premises provided by a local school. Its purpose is to open up the field of art making to adults with learning difficulties, and to do so with a minimum of guidance, with the aim of encouraging individuals to rely on their personal imaginings.

Twice a week, Bonifacio arrives at ArtVenture, settling down at the same corner table and working with utter concentration for four hours solid, often completing four or five drawings per session. By now, the centre has several drawers crammed with hundreds of his drawings of varied size, as well as shelves overflowing with his unmistakable ceramic heads. He takes his work at ArtVenture seriously, becoming disgruntled at any interruption of his studio time. Once he has decided a piece is finished, he will animatedly discuss its contents in his native Portuguese, breathing life into the image. Although Bonifacio is somewhat hampered in his flat because of its lack of space and materials, he does occasionally copy objects from television, resulting in images of leading political figures and current affairs. Incredibly ambitious and proud of his work, when asked whether he likes his own creations, he tends to reply – unpretentiously – that he sometimes does, and sometimes doesn’t. “If I don’t like it, I throw it away.”

Early on, he liked to sketch churches. When he was first introduced to colour paints, the results were spoilt by impatience, and he would end up with a muddy mess. He was then given coloured pencils and wax crayons, and has since stuck to these materials. Nowadays, he draws with a quiet intensity, insisting that his picture must accord with his specific intentions. He usually signs it, using the date of the current year, but sometimes an arbitrary date. For him to enter a florid signature containing his full name at the bottom of a drawing may be understood as registering his satisfaction with, and pride in, the completed work. When he sees that people are impressed by what he has done, he will provide a narrative commentary, complete with generous gesticulations. This has been evidenced at exhibitions of his work where he has enjoyed beguiling an audience with much gusto – still in his native Portuguese. His rich output extends to prints and wood carvings, and he is willing to improvise with other available materials. This has led him, amongst other inventive creations, to carve an Inca-inspired creature out of breeze blocks using a rasp, and to build a bicycle out of paper – albeit with a flat tyre. Many of his ceramic pieces take the form of grotesque human heads daubed in lively colours, subsequently gifted with a similar facial structure to his mermaids. These recurrent faces are open-mouthed and semi-surprised, with a gormless, though contented, air.

Bonifacio’s characteristic style revels in themes from contemporary life as well as in fantastical material. Occasionally his work is based on real-life celebrities, such as the Pope, the American president meeting the British Prime Minister, or members of the Royal Family – Prince William, the Queen. He likes to portray dancers, buskers, circus acrobats, deep-sea divers: all are shown in boisterous attitudes and often in situations of apparent risk. In Reaching New Heights, an ageing songstress clambers onto a wobbly chair so as to reach a microphone. As for animals, Bonifacio has developed a distinctive menagerie that includes elephants, cows, horses, wolves, snakes, eagles and fish, all arrayed in bold colours. There is also a fine series of dogs painted on blocks of polystyrene.

Bonifacio loves it when the Director of ArtVenture brings her pet dog along to the studio. It is, however, not just familiar pets that he seeks to immortalise, but imaginary creatures such as his chubby Jungle Animal, which is in fact the representation of a giraffe minus the normal elongated neck. His treatment of the horned Ox is a fanciful elaboration in monochrome, with wayward double lines that translate the motif into something quite eerie. A multichrome study of a horse and its rider blithely splashes its contents across the picture surface, celebrating the animal’s success in lunging free of its rider and revealing all sorts of fussy accoutrements and zones reserved for abstract doodling. Bonifacio instinctively takes pains to squeeze hooves, boots and hands within the boundaries of the picture frame, thus tying down the figure or creature in a way that makes it resonate, bouncing around within the limits of its existence.

Faces abound in nearly all his works, and are frequently tucked into unobtrusive corners, a strategy that arouses our curiosity, as in Flying Granny, at the centre of which a triangular face is squashed inside a complicated group of components. Bonifacio speaks of wanting to create an illustrated book for children, while, for the attention of adults, he would like to show his work in newspapers, hospitals and on aeroplanes.

Bonifacio’s liveliest theme is transportation, possibly arising from his keenness to join the army, with its fleets of tanks, helicopters and fighter jets. He can summon up a gypsy caravan, a double-decker bus or a submarine, sometimes presenting these objects in cross-section, as in a diagram or blueprint. His boats and buses may suggest a link to the Thames and the roads he walks along, while his flying machines could equally be derived from the everyday passing of airliners bound for Heathrow. One flamboyant drawing shows an airman dangling from a sort of parachute and floating unconcernedly earthwards, while a second flyer benefits from a one-man powered parachute. These aerial performances seem devoid of any element of danger or panic. In keeping with that sense of cosy naturalness that is a telltale feature of many Outsiders’ vision, the motorbikes of his drawings bear little relation to any real vehicle, being instances of extravagant and wilfully implausible invention. Biker and Bike presents an impeccably bizarre machine at rest alongside a rider who stretches out in languor, an arm cradling his head, as if recovering from a near-miss that never was. Flying Granny is crammed with peculiar detail and is partly explicable as the scene of a momentous crash in which a woman struggles to control a strange vehicle full of collapsed objects, and is rescued by being borne aloft on the soft back of a giant crow. The scene could have an autobiographical origin, although its overall tenor is that of a crazy dream, a happening in some other dimension.

Manuel has a strong sense of catering to an audience, as may be gauged from his eagerness to give commentaries: these are, one suspects, largely improvised. One of them relates to his portrayals of mermaids. He explains:

They live in a land. She stays in a caravan. She has a chauffeur, and the caravan drives around the roads, with the police driving in front. The caravan goes into the sea and goes underwater so the mermaid can get out. She has a house at the bottom of the sea. There are crocodiles in the water. The mermaid waves to the people, then goes underwater when the boats pass by. Baby dolphins swim around and kiss her.

Manuel avers that as a child he used to be able to see this creature, who lives in Lisbon yet travels all over the world. He recalls that all the children used to exclaim “Look, there she is, the mermaid!” Lisbon, a city of great inspiration for Bonifacio, is in fact populated with several mermaid statues, including eight in the large fountains on Rossio Square, perhaps triggering childhood memories of the mythical creature and metaphorically bringing him close to the city itself. Bonifacio’s iconic heroine is clearly a receptacle of symbolic meaning. She dresses in a fluent costume of many colours, and wears her heart on her right side. Ignoring the stock attribute of the mermaid’s tail, the artist provides lace-up boots for her feet, as proof of her robust physique. Such a creation seems to be a perfect reality for him. Her arms and elongated fingers could be seen as enacting the motions of swimming, although the versatile creature could also be flying. One may assume she is capable of traversing earth, sea and air, and thereby becomes an emblem of the artist’s unfettered imagination.

In 2012, Manuel Bonifacio became the recipient of an award in the triennial Outside In exhibition organised by Pallant House Gallery in Chichester, and has since enjoyed a solo show there. By now he has also exhibited in Birmingham and London, and has work in private collections in Zürich and New York. His artistry is considerable and bears comparison with that of long established Outsiders such as Guillaume Pujolle and Gaston Mouly. Though clearly delighting in public recognition, he remains modest, and once remarked “I don’t feel big. I am a small person.”