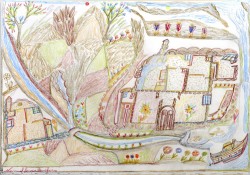 In 2012, Manuel Lanca Bonifacio was crowned one of six Outside In: National Award Winners. Kate Davey introduces his work ahead of a solo show in the Studio in May 2014.

Born in December 1947 near Lisbon, Portugal, Bonifacio pursued his interest in drawing and pottery after dropping out of school at the age of eight.

His most recent collection of work, which features the award winning
Mermaid and other pottery, is inspired by his passion for archaeology and animals.

Bonifacio paints, draws, sculpts and makes at ArtVenture – a creative day centre for adults with learning difficulties – for four hours every Wednesday and Friday. The charity was set up in 1984 to provide an opportunity for vulnerable people to explore the visual and, on occasions, the performing arts, in a safe and secure environment. Since his Award win, Bonifacio has exhibited in Birmingham and London and now has work in collections in Switzerland and New York.

Manuel’s thing at the moment is mermaids, but he loves motorbikes,’ his niece says. ‘He likes to do things his own way; he thinks “I’m the artist and I know what I’m doing!”’ Bonifacio’s mermaids – one of which won him the Outside In: National Award in 2012 – have an interesting narrative all of their own. ‘They live in Lisbon, but they go all over the world.’ says Bonifacio. Lisbon is in fact populated with several mermaid statues, including eight in the large fountains in Rossio Square. Bonifacio adds: ‘All the children used to say “Look, there she is – the mermaid!” She waves to all the people, and then goes under water again when the boats pass.’

Roger Cardinal, who coined the term Outsider Art in 1972 as the English equivalent of Jean Dubuffet’s Art Brut, was one of three Outside In: National judges. He speaks of the moment he first saw Bonifacio’s Mermaid at the Gallery: ‘It struck me as entirely familiar and made me think of the Frenchman Guillaume Pujolle, an early star of Art Brut whose lyrical images I cherish. This brief and decisive moment established Bonifacio as my top choice. The Mermaid, Cardinal suggests, is ‘a perfect reality for him [Bonifacio]. I see her arms and elongated fingers as enacting the motions of swimming, although she can also be said to be flying. Hence she is capable of traversing earth, sea and air, and becomes an emblem of the artist’s unfettered

At a young age, Bonifacio joined the fire brigade as a volunteer and his life’s ambition was to be in the army. Many of his works reflect his passion for army transportation, depicting helicopters, aeroplanes, motorbikes and boats. His work is also inspired by politics and everything he sees on TV, but most of it comes straight from his colourful imagination. His sister, Maria Odone, describes the huge variety of subject matter he depicts: ‘The birth of Jesus, the circus, the Pope, the Queen, Margaret Thatcher and David Cameron, dancers, Christmas inspired pieces, motorcycles, musicians, buskers, birds, divers, fish, helicopters, dogs, horses, wolves, mermaids, and always people. There are faces in most of his work. He also uses numbers, even though he doesn’t know about them.’

When Bonifacio arrives at ArtVenture in the morning, he sits down and starts work straight away. There is a sense that he has a huge number of strong ideas Manuel Lanca Bonifacio, Untitled 42 just bursting to get out. Once he’s finished a piece, he immediately starts on another. ‘He’ll just go off and do things. Sometimes it does work and sometimes it doesn’t,’ says Anne North, an Art Worker at ArtVenture. ‘When he gets a bit frustrated, he just leaves it and goes onto something else.’ Bonifacio has recently started making smaller pieces on coloured handmade paper. ‘You can’t always get him to do a background, but using this paper, he’s really taken off on it,’ North Adds. ‘I love his cows – they’re so original.’

Both as a memberof ArtVenture and with his family, Bonifacio travels to London to explore galleries and exhibitions. More recently, he visited the Watts Gallery where he was impressed with the sarcophagi on display, which have subsequently inspired several of his pieces. When he is travelling, Bonifacio will collect discarded materials to work on both at home and in the studio, resulting in some beautiful images like his dogs on polystyrene. His love of animals is very clear to see, and Bonifacio especially enjoys it when North’s dog visits the ArtVenture studio, providing an opportunity for him to sketch it from life.

Keen to explore and take on a challenge, Bonifacio has previously experimented with printmaking and wood carving and he occasionally likes to try watercolours and oils. He also produces distinctive ceramic mugs, vessels and faces. ‘I’ve got boxes and boxes of his ceramics!’ North adds. A cupboard at ArtVenture houses Bonifacio’s fired and unfired ceramic work, where you can see the similarities between these faces and the faces he gifts his mermaids. The artist’s unfettered imagination and instinctive creativity has seen him use breeze bocks to create an Incainspired creature and make a bicycle out of newspaper, albeit with a flat tyre. There were no chisels available to cut the breeze blocks with so, without hesitation, Bonifacio picked up a rasp to carve out his character. Odone says: ‘The proper tools weren’t even available, but he just knew what to do and got on with it.’ Walking from Cobham to Kingston regularly – a 20 minute drive – Bonifacio notes down road names, makes sketches and absorbs nature and life, which are ever present in his work. One of his figures was inspired by a statue on a roundabout in his hometown, but more generally, the characters he so vividly creates live in his imagination. There is a sense that he could conjure anything; a donkey, a bullfighter, various forms of transport.

Bonifacio’s spare time is filled almost solely with his making of art but, with no sense of time, he just continues to create, making four or five images in the space of a few hours. He greatly appreciates his time at ArtVenture where he has access to a huge variety of materials and art workers who are knowledgeable about numerous processes. ‘He has so many ideas,’ Odone says. ‘He likes to finish things properly as well but he can only do certain things at certain times – he can’t work on big things in his flat, and sometimes he can’t do big things at ArtVenture because of space issues.’ Bonifacio’s work helps him expose his unique view to the world. He is continuously creating one piece after another; a drawing, a ceramic, a painting. ‘When he’s working, he’s focusing on that; it’s how his mind works,’ says Odone. But when he is finished, he is happy to sit down and talk through the characters he has created in his native Portuguese. His experimentation is equally as admirable as his obvious inquisitiveness: ‘I like everything!’ Bonifacio says when asked what his favourite medium is. Odone adds: ‘Manuel’s work has been a valuable asset to everyone who knows him as it is also a way he likes to communicate. His ideas and perception of what is going on around him both locally and nationally are very unique. His ambition as an artist is to travel around the world and meet local people and find places that will inspire him further.’

Bonifacio loves people to see his work. ‘My service is to start and finish. I like to walk and look around, looking at buildings,’ Bonifacio states. He is also incredibly ambitious and proud of what he creates: ‘I’d like to make a book for children, for schools. And for adults, I would like to have my work in newspapers, hospitals and aeroplanes. But I don’t feel big, I am a small person.’ Of his upcoming solo exhibition at the Gallery, he says: ‘Everybody can come and see it!’

See more of Manuel’s work on his Outside In Gallery: www.outsidein.org.uk/manuel