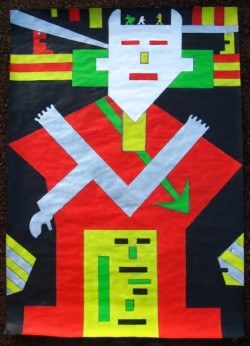 Outside In artist Patrick Joyce appeared in issue 79 of Raw Vision magazine in August 2013. Patrick has had his work exhibited in both the 2009 and 2012 Outside In exhibitions at Pallant House Gallery.

An article written by Art Therapist Tony Gammidge, appears in Raw Vision titled ‘Seeing the world differently.’ Patrick describes how he sees things as if out of the corner of his eye and how this inspires him. He appears in all of his paintings, along with a cast of animals including wolves, dogs and foxes.

Full PDF of the articleDownload