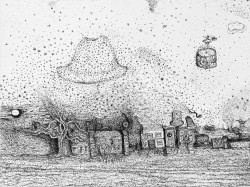 Ahead of his solo show in the Studio at Pallant House Gallery, Outside In: National 2012 Award Winner Phil Baird, talks to collector and art enthusiast Rose Knox Peebles …

ROSE KNOX PEEBLES: What I notice about your art, beyond the joy of the work itself, is how assured and confident your technique is – the discipline of drawing.

PHIL BAIRD: It’s been a long road and there have been dreadful times when I haven’t done any drawing.

RKP Did you draw as a child?

PB A little bit. Much of the later work was catching up on what I would like to have done then. It was remedial work, creating childish images just to get through that part of my development as an artist.

RKP Did your parents encourage you to go to art school?

PB They were a bit strange about it but they realised I was going to art school no matter what. I don’t think they expected me to be working as an artist for 40 years.

RKP I was interested to see that you were taught by Terry Frost and Adrian Heath but you weren’t influenced by them?

PB I did take a little influence from Terry Frost for my MA show, but since then it has really been my own take on things. However, when you are young and you need to find your own way, it is often through inspiration from another artist.

RKP I have noticed several themes running through your work, one is community. When you write about the Pitman Painters the camaraderie they enjoyed comes through strongly. I can’t imagine any artist being similar to you but perhaps you have been part of a group working in a similar way?

PB When I was at Wimbledon in the ’80s, the influence was of everybody trying to be different from everybody else, trying to establish their own style. My influence, perhaps, was Mervyn Peake. My work is illustration really.

RKP It goes far beyond Illustration; it is imagination.

PB Yes, it is from the imagination and it’s informed by a lot of abstract work as well.

RKP Were you ever influenced by what we might call well-known artists? Or perhaps you have admired somebody very much?

PB I like all the greats, like Matisse. Paul Klee was a big influence, and I’ve sort of been pinching bits from these artists. We do workshops on ‘taking the line for a walk.’ There’s a whole movement of people like Scottie Wilson and Madge Gill that developed not from drawing, but from doodling, like Dubuffet. Then there is William Blake and Samuel Palmer; I see them as sort of historical friends.

RKP Some artists form movements and others absolutely don’t want to. I wondered whether you ever wanted to be part of one?

PB I think movements are great! It’s people who have something in common getting together. There are artists I’ve felt more akin to than most of the people I came across in art school – for instance Kate Bradbury and Carlo Keshishian whom I met through Outside In; it’s like we understand each other’s language.

RKP There is a language in art; you can see in the work what artists have picked up from each other. It’s not picking up in a bad way; it’s picking up in a positive way.

PB If you looked at, say, Picasso and Braque, they were almost identical. And actually, that’s part of my philosophy – I believe in community and camaraderie and sort of socialist beliefs.

RKP To give your best to everybody and take the best from others – give and take?

PB Definitely. That’s something we do here at Network Arts; we get an idea from somewhere and then make it our own. There’s no copyright on pen and ink. I’ve always wanted to contribute something; to use my access to the public to represent others. I feel I’m part of a community; everybody’s different but we’re all part of an art community.

PB No. When I was first at art school and then at college in the ’70s I did a few black and white drawings of views of the far side of the valley. At one stage I did a lot of etching; it’s part invention, part imagination.

PB Yes, but there is a freedom to it; I can include whatever I want.

RKP That is a theme I have noticed, memory. Not a repudiation of the past, but a celebration of what you find good in it. There are ghostly images of tall ships in some drawings. What do they relate to?

PB My family on my mother’s side came from Whitby, so I’ve always loved the sea. My ancestors were sea captains – on whalers. Though nowadays this is not something to be proud of.

RKP You put the romance of your past in the drawings. You should write about them, particularly your award-winning piece, ‘The Cosmic Hat’.

PB The hat is drawn literally from stars, so the stars form the shape of the hat. It was very big, very cosmic. I have also used spinning hats like spinning plates to represent the different roles in life, keeping the plates spinning.

RKP Which reflects the many things you do. Another theme in your pictures is re-birth. You run Outside In: Step Up workshops; you’re an ambassador for Outside In and you run workshops here at Network Arts.

PB It started happening over the last four years. The Outside In: Step Up training came just at the right time. It was scary. It was such a new thing but it was very well facilitated and I met some great people. I’ve been able to flag up Outside In and Network Arts and then I’ve sold some work.

RKP Throwing your hat in the air was a suitable gesture when you learned you had won the prize.

PB I don’t need to sit down in the landscape and draw what’s happening in front of me. I do Sunday afternoon paintings some times, but they’re never as good as the imaginative ones. Most of my work is done in the evenings where I live, which is in supported accommodation. It’s a good and therapeutic way to work; you get the chance to process things throughout the evening.

RKP In some drawings there are glimpses of colour; I wondered where that came from?

PB There was a time when I did a few black and white pieces and happened to have some colour and thought I would try it out. My work is free, in that sense; at the same time, by using colour one is adding constraints.

RKP Do you see your style developing over the next ten to fifteen years?

PB Hopefully it will, although I don’t know how. I am interested in the abstract as it’s accessible to people. Even though they won’t know the specific story, they appreciate it.

RKP Our time is almost up; is there anything you would like to add?

PB Just a thank you for the tremendous support from Outside In. They’ve opened up lots of avenues for me. It’s a lifetime opportunity to have a show in a public gallery – a solo show. It’s just incredible that these things are happening. It’s all been rather overwhelming. But it’s nice, because it’s what I do and it’s how I contribute.

RKP Are you proud of your work?

Phil Baird: Simple Complex Drawings is in the Studio of Pallant House Gallery from 6 August to 8 September 2013. For more images of Phil Baird’s work.