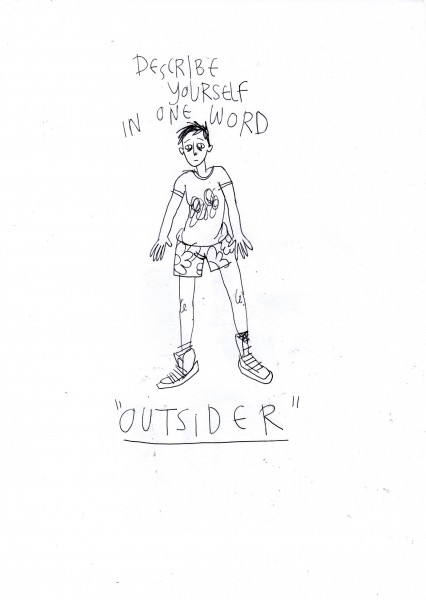 Today, 10 October 2018, is World Mental Health Day. First celebrated in 1992, the aim is ‘to draw attention to the importance of mental health, knowing there is much to be done to increase public education and advocacy’. This year the initiative – which is run by the World Federation for Mental Health – is focusing on ‘young people and mental health in a changing world’.
With this in mind, Outside In artist Ellen Francis tells us about her artistic journey and how – prompted by an important conversation with her tutor – it ‘gave me confidence and validation to create freely and exorcise an otherwise debilitating mind state’.

When did you first start making art?

Art or drawing has always been something I’ve done throughout my childhood, I remember in Primary School when we were assigned to do a project I’d always ask the teacher if I could draw as part of it- I think I’ve always been “the arty one” to my peers even in High School when you’re in a much bigger year group I was often identified as “the one that’s really good at drawing” or something. It’s hard to think of my childhood without it being about drawing or art class so even though I can’t say how old I was when I started because I don’t remember- it’s always been there.

How do you feel it has changed over time?

When I was younger making art was very much about escaping into imagination whether it was making up characters in the worlds of my favourite movies or tv shows or making up my own, it’s hard to remember everything that I used to make and do, but there was always a story element to it- pretending to be other people in their own lives. That was end of Primary School and well into High School even starting into my Art Foundation. When I went to college for my Art Foundation I felt more comfortable talking about how I actually felt with tutors because I was treated as an adult and I could really take ownership over myself and my choices, they were preparing us for University after all, so I got to explore making art about how I actually felt instead of hiding inside a make believe character and that’s how I approached my artwork at Uni as well. And whilst that’s a very freeing and cathartic way to deal what’s actually going on, being so face to face with how you feel all the time and not getting some sort of respite away is very mentally taxing. I don’t think I’m never going to go back to making art that way but currently I’m going back to escaping into stories and making beautiful things for the time being but I guess I’m still mindfully utilising personal narrative with that without going completely overboard.

Do you have any creative/artistic role models?

I used to be, and I guess still am retrospectively, inspired by Louise Bourgeois, Tracey Emin and Grayson Perry for their confessional approach to art and fearlessness- and they really freed me artistically so I can’t not mention them. I’m also really inspired by some films and filmmakers like Jan Svankmajer or the french film Donkey Skin and films like it because of his artistic vision and the art direction and prop design and costume design. It’s like dreams (or nightmares in Svankmajer’s case sometimes) coming to life and becoming tangible rather than computer animated falsities that you can’t touch. Henry Darger did that a lot with his stories and the Vivian Girls. German Expressionism is also very inspiring, especially as it seemed to be born from WW1 and this sudden exposure to trauma for artists to then go essentially “fuck it” and paint what was actually going on instead of some romanticised ideal. I wrote about this in my dissertation, ha. But from that period you have artists like Max Beckmann who went from painting romanticised figures and scenes to these disjointed and loud and crazy nightmare-scapes after WW1. I love them, his paintings then went into featuring circus characters and fantasy elements with that dark realness which he was always inspired by and I guess that’s similar to my current development as an artist.

Ellen Francis: Home is Where The Depression is

What would you say are your biggest sources of inspiration?

Even though my process has changed slightly I still use my personal experiences and connection to things as part of my process even though now I want to be more immersed in the fantastical side and not just the hard reality. Henry Darger making his story into something beautiful and terrifying at the same time is something I get really inspired by, using metaphors and beautiful immersive things.

Is there a process you follow, or does it vary?

I’m currently working on a graphic novel re-adaptation of one of my favourite books and at the moment I’m trying to build a big enough portfolio and plan to pitch it to an agent who would then talk to the publisher on my behalf to get the copyright so I can go forward with it. It’s a tender little big creative endeavour that I’ve been working on since I graduated and has been a massive part in my recovery. Now that I’m out of uni and don’t have a deadline for projects anymore I can take almost a year just to take on this big task and experiment. I’ve always loved graphic novels and stories and would like to make my own, biographical or not, I’ve also experimented with film and sound at uni and I’d like to continue with that once I get this project out the way. This current project with making all these props and sets is kind of a stepping stone to that.

You describe your work as having an autobiographical element and that you hope it can help others, what inspired you to take this route?

The autobiographical element, despite how little it comes into play with what I’m currently doing, is still massively important to me in what I do and how I am- it’s just more important to balance it out. I started to work this way in college after having a very important conversation with my tutor about my mental health and experiences, something I had never talked about before like this- it certainly wasn’t something I felt I could talk about with my family- and from talking about someone that not only put me at ease but also knew exactly how I felt and what I was dealing with, it gave me confidence and validation to create freely and exorcise an otherwise debilitating mind state. I owe her a lot, I didn’t feel like a freak suffocating on my own secrets anymore once I got to talking- I think I would be in a much worse state without having that talk and being allowed to express myself like that.

Do you find you have to strike a balance regarding revealing too much or is it boundary-free?

When it comes to myself and what I want to share about myself I’m pretty lax and I’ve been commended for it in the past, however when it comes to other people and their relationship with me I can’t just run my artistic mouth and make whatever and say whatever about people despite it being the truth or my truth. I think naturally I’m quite an open person about experiences and it’s really nice to have a conversation with people that they wouldn’t have otherwise had at all because of the topics I made my art about and even though they aren’t as in-depth as I am, when other people acknowledge it in themselves it’s enough. There are some things that I’m hesitant to make work about or upload, as I’ve made pieces that very explicitly outs abusers by name and face etc but it’s not the same as warning friends for example. But those pieces that I don’t share, they’re for me to express and get out.

What role do you think art can play with mental health? – How does the relationship work for you?

I think art is very important for mental health, regardless of skill, I’ve gone to a lot of art therapy groups and you have a lot of people who openly talk about how bad they are at it and how it’s not good and it’s really sad to hear but they always seem to get really stuck in though. I always feel awkward as the art graduate, because then everyone looks at me as if I’m going to scoff at what their attempts- it shouldn’t be that way, not for my sake but for theirs. And whilst I’ve heard of some people hesitant to go in the first place or leaving because they feel that they’ll get judged- once we begin, we all just get stuck into it and I can tell the others are just as invested into their creations as I am. Having a creative outlet is obviously great, having a reason to leave the house or having something to focus on instead of ruminating, or working towards a big project no matter how long it takes like I am is so so important with mental health. It certainly has given me purpose and looking back to how I was before I had this mammoth self inflicted project, where I felt that I was going to go nowhere and there was no point and feeling that I was at the end- to how I am now, it’s been pretty central to my recovery.

Do you think this has changed as our environment becomes more digital?

I personally really don’t like working digitally and I feel like I might be biased when it comes to commenting on how technology has become more prevalent in our environment and especially in the art scene. I’ve known people on my course who could say the same about digital art being a great confidence builder and coping mechanism. But at the same time I think when you make things by hand rather than sitting in front of a screen and having that immediate gratification of made a tangible item, and the process can be very physical and cathartic. I only think that there’s going to be an expectation if you want to go into an art career that it has to be more digital and not handmade at all, which I’m very stubborn and vehemently against, and at Uni there was a push to teach you digital methods- not that I’m against that but I also don’t think it’s ridiculous to not make handmade crafts obsolete because the process is worthwhile to the creator. It’s something that makes me nervous as an art graduate, but not too worried as someone that attends group therapy, I don’t want what I’m doing by making handmade props and puppets and dolls to be considered twee and nothing and me continuing to do so is “radical”.

But I do it anyway because it’s good for me and I know what I need to do.