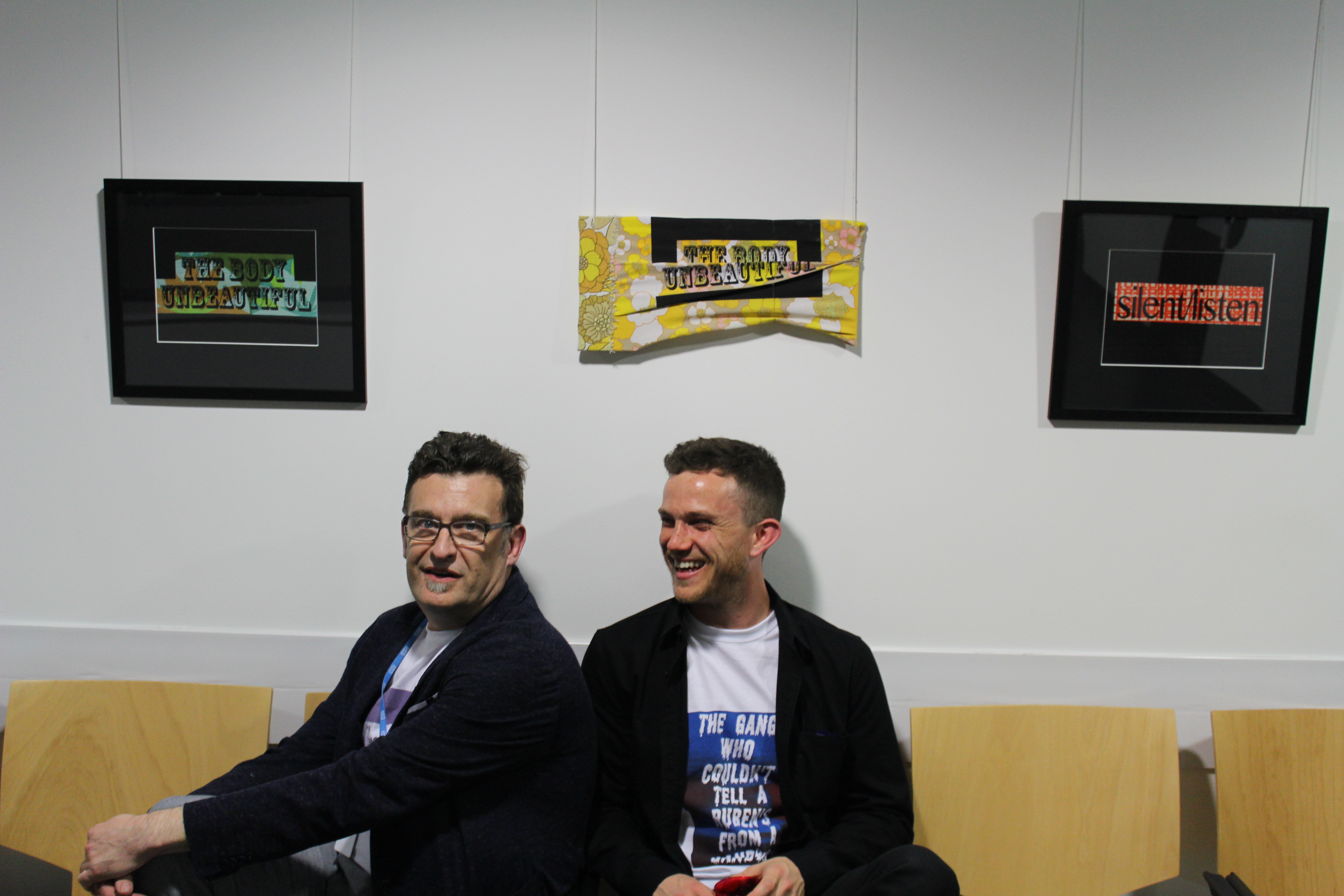 The Shared Insight exhibition at Kentish Town Health Centre and Freespace Gallery showcased the work of artists Harrison Moore and Terence Wilde. Harrison is a third year Central Saint Martins Fine Art Student and Terence is an artist associated with the Outside In project at Pallant House Gallery. The two artists had been part of a four month residency at Kentish Town Health Centre, exploring shared insights of what it means to be artists working in contemporary London. Here we look back at the residency and the impact that it has had on the two artists lives. The exhibition in the Freespace Gallery (inside Kentish Town Health Centre) showcased four months worth of work from Terence and Harrison. This included: screen printed t-shirts and modified screen printed t-shirts; screen prints onto vintage fabrics displayed in several different ways; photographic prints; printed scripts from conversations and two films – one of three actors reading the scripts and one by Jorge who was given free reign to create a 30 minute film from all the footage that he received across the four month period. When interviewed separately at the end of the residency both artists said that the residency had exceeded their expectations with Terence stating that it was obvious from day one that they were going to get on and work well together. They both spoke of increased confidence, stories to tell others and further insights into their own characters – with Harrison wanting to learn how to listen more and to not dominate conversation. Both artists said that their favourite work was the film that they both recorded and edited that featured actors reading their scripts from conversations that had taken place across the residency. These featured topics such as love, fear and their mental health, that were then transcribed, filmed and shown on an old TV within the exhibition space. Terence said it was a scary thing to do, and something that he would never have imagined himself to do as it was outside of his comfort zone, but that he had learnt new skills and was very proud of them both for doing it. The written scripts from conversations held between the two artists

The two artists had a series of tutorials with Marc Hulson (a CSM MA Tutor) throughout the residency, which they both felt were useful. Harrison stated that Marc was sensitive and diplomatic and that he helped bring a stability to the residency. Marc said to us that it was a fantastic opportunity for him to sit in on a conversation between two artists and be allowed in to the conversation, which was rare in his line of work. Terence and Harrison modelling their t-shirts at the opening

Harrison is now going on to study an MA at the Royal College of Art and Terence has plans for new, bigger work and to get back in to drawing, which he has missed!