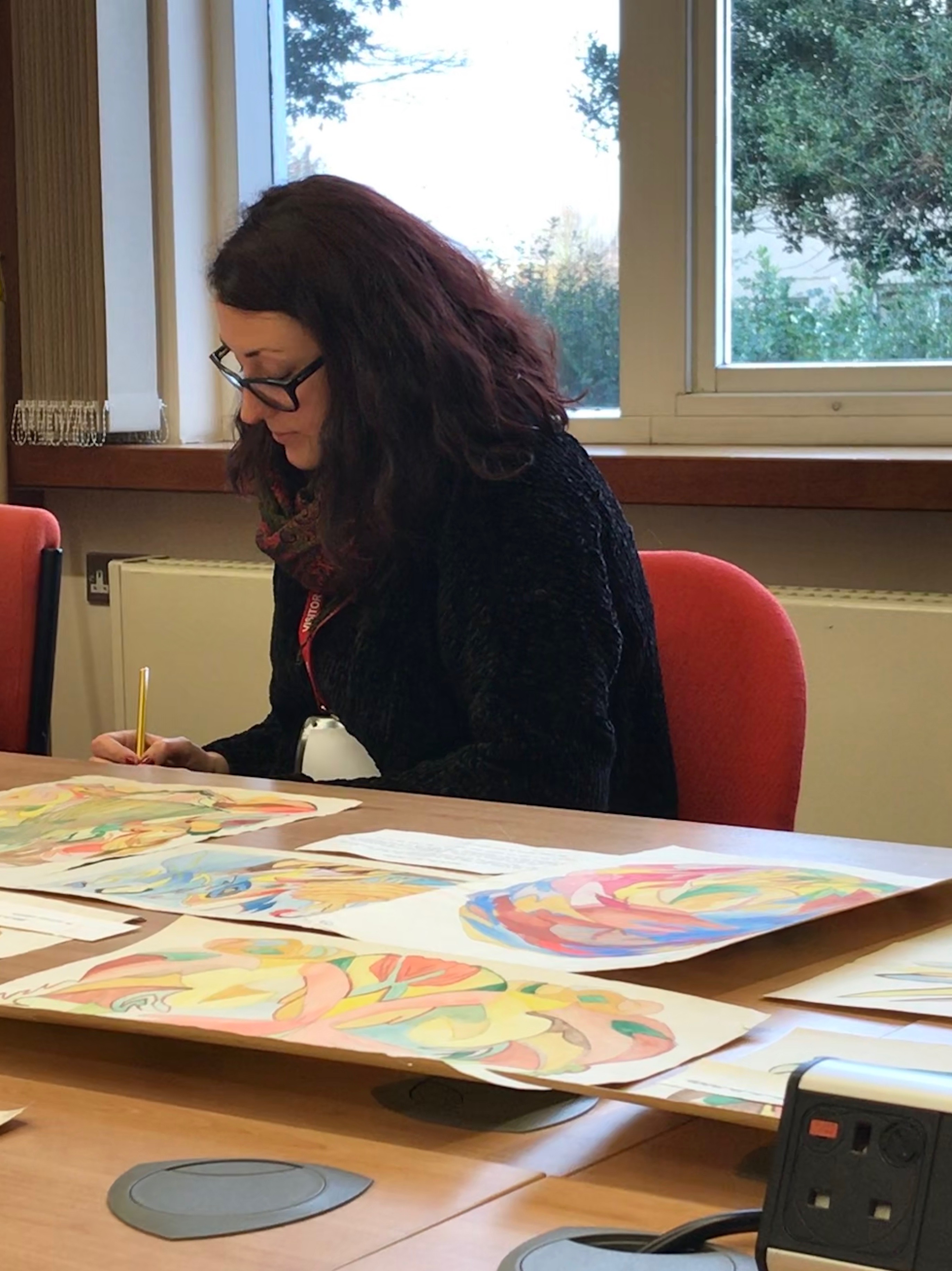 The second Vawdrey Archive Project session allowed the Outside In artists taking part to see some of the artwork created by patients of Dr Vawdrey properly for the first time. Here artist Jennifer Milarski-Stermsek shares an insight to how she found the experience, the artwork it inspired and her hopes for the project.

As mentioned in the previous blog post, Monday 17 December was the grand ‘unveiling’ of the Vawdrey Archive artworks for us artists. It was our first proper moment of exposure to the artworks and was unexpectedly overwhelming.

Since the previous session, when we had been shown the 3 or 4 artworks that were most accessible during our tour, I had not been able to stop thinking about what else was waiting for us. Admittedly I had been dreaming about the visual richness I had glimpsed and what else there was in store for us aesthetically. Obviously I was aware of the background and conditions of these artworks coming into existence but from what I had seen I just couldn’t wait to feast my eyes on the rest of the works.

Jennifer Milarski-Stermsek with some of the artwork

The two case studies were laid out at separate ends of the Records Office, separated into Case 1 and Case 2. We briefly spoke about each one, with agreement that we would discuss the medical facts of each Case after an initial, more objective, viewing. As soon as we had agreed this I ran off to Case 1 as I could already tell this was a lot more than I had bargained for and I wanted to spend some time alone with the works. We were encouraged to note down as much as we could with no specific criteria. I wrote ideas about things like form, colour, my thoughts about what the person could’ve been going through or diagnosed with at the time, how a piece made me feel and questions about how Jungian philosophy was used (some images look like something straight out of The Red Book).

Case 2 in particular had a very big impact on me emotionally, even before we discussed it in more depth, but especially after learning more information about them as people. I could draw a lot of parallels between both of them and myself and I had a profound sense of kinship with the people who had created these artworks.

The intensity of feelings that these works conjured up for myself and my fellow artists made me even more excited to be part of the project and solidified in my mind the importance of the work we are doing.

Something we have discussed as a way for us to collate our thoughts and creative outpourings from the project is a serious of postcards. Each artist has a book of 12 postcards and we can use these how we wish. There is something very exciting about posting them as well, in a time when everything is digital we are expressing ourselves through a system which was around in the 1950s, when Vawdrey was working.

My first postcard materialised in under 5 minutes, although I think of myself as an intuitive and vocational artist (I create because I really feel that I have to, I wouldn’t be able to exist without doing so), I feel this was the first piece that truly came into existence without me considering outside factor such as audience, art history, where it would/could be shown etc.

Recently, one of the ways I try to monitor my mental health is via a chart, colouring in each square, and/or assigning a letter, to quantify my thoughts and feelings of the day. However I am not doing so to suggest one number is better than the other, just to get an idea of the how and why factors that contribute to things fluctuating. This can be very frustrating, however, in a clinical/medical setting it as having to sum up something so complex on a 1-10 scale doesn’t really do it justice. I was actually undertaking the task of assigning a colour to my day when I picked up a postcard and drew out the grid of days and began colouring it in, the figure symbolises my frustration with completing this task as at the end of the day, is this exercise actually going to make any difference?

Although I created this piece a few days ahead of the initial archive viewing session, it felt quite sychronistic, that perhaps some of the questions and feelings that arose for me when reflecting back on this work were similar to those being addressed in the Vawdrey Archive.

To read Jennifer’s Vawdrey artist profile, please click HERE. Her Outside In gallery page can be seen HERE and more about the project can be found HERE