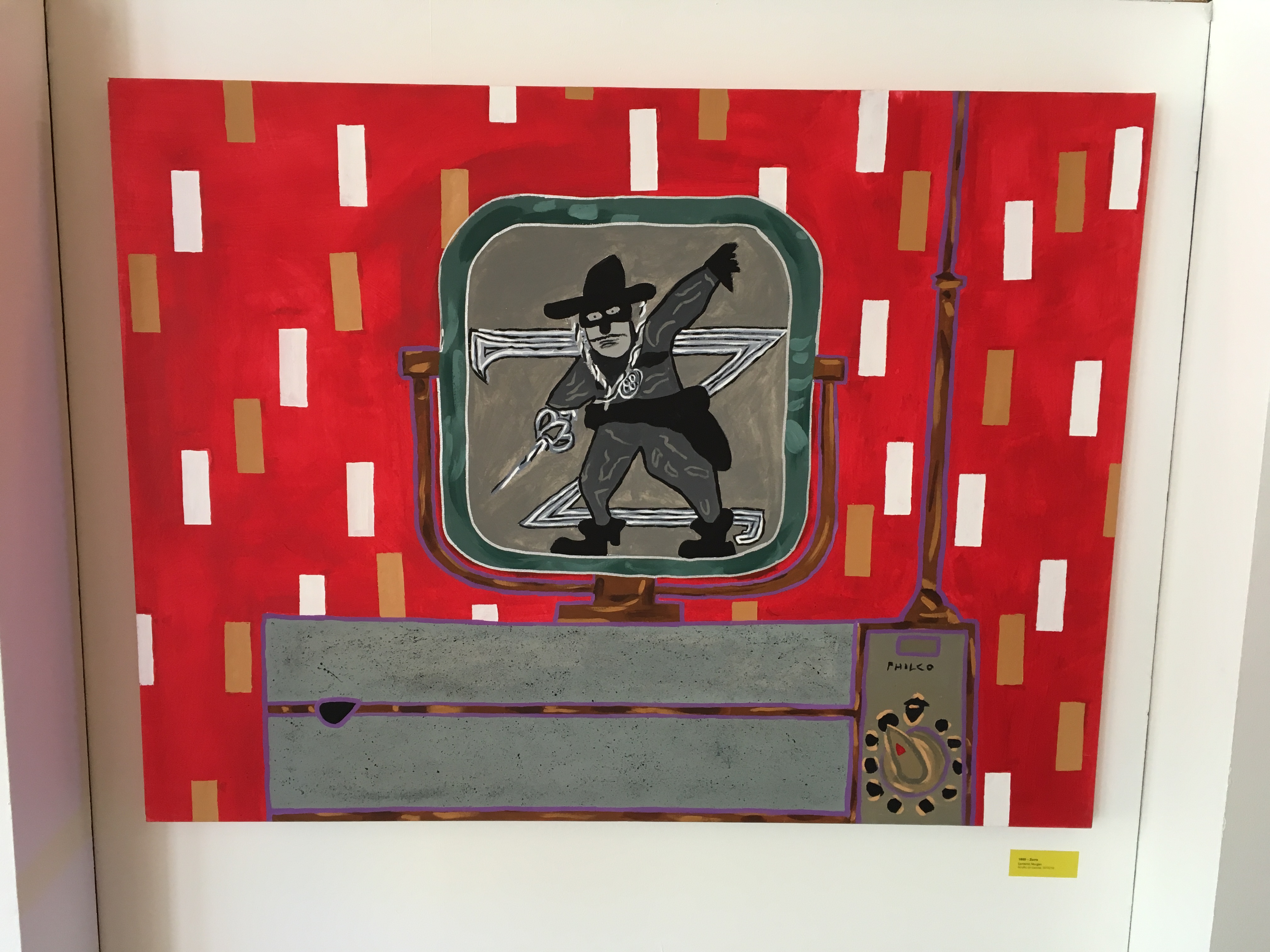 Jennifer Gilbert, Outside In Manager, was at Unlimited Festival last week at the Southbank Centre in London. Unlimited Festival celebrates the artistic vision and originality of disabled artists. As well as overseeing the Outside In exhibition Nama Āto: Japanese Outsider Art, Jennifer had the opportunity to see much of the fantastic performance and visual art on show over the six day festival. A highlight for Jennifer was Cameron Morgan’s series of paintings entitled TV Classics Part 1.

I have met artist Cameron Morgan a good few times on my travels around the UK, and he and his work never fail to bring a smile to my face. Cameron attends Project Ability* in Scotland and has done so since 1991. Before this he used to make smaller work at home, but now, within the studio setting, he has the option to work on a much larger scale. He also has access to many different and varied materials and processes, though his main disciplines are painting and ceramics.

Cameron received funding from Unlimited in 2015 to create a new work entitled TV Classics Part 1. He is fascinated by popular culture, and particularly loves 70s and 80s television, films and music. This funding allowed him to work with iconic television imagery from the 1930s onwards, and to spend six months, working one day a week, on a series of ten new large-scale acrylic paintings. The final canvases were on show as part of Unlimited Festival. Each canvas depicted a TV programme, from classics like Laurel & Hardy right through to modern favourites Peppa Pig and The Voice. Each image was framed by a TV set and wallpaper appropriate to the era. During Unlimited Festival last week, I was lucky enough to catch Cameron in conversation with Elisabeth Gibson, the Director of Project Ability. Here are the highlights from that talk. Although Cameron has attended Project Ability since 1991, they decided to focus only on the period from 2009 to the present day, in order to showcase his most recent commissions (the talk didn’t include all the other work that he has created in-between the commissions!). His first major commission was a wall mural at Collins Gallery in 2010 entitled Myscape. Cameron lives nearly 35 miles outside of Glasgow, so this mural featured the landmarks that he passes on his way into Glasgow each time he attends Project Ability. This work formed part of an international exhibition showcasing artists on the autistic spectrum.

Following this, Cameron was commissioned by Project Ability to do an even larger mural across one wall in their own gallery in 2011 to mark the Olympics. This took him nearly three weeks to complete. In 2014 Cameron’s Way: Coast to Coast was another large scale project where he got to work with artist mentor Jason Davies. He was given the whole exhibition space at Project Ability and had five weeks to cover all four walls with paintings, again about his travels. During this time the space was open to the public so that they could see Cameron working on this commission.

The Unlimited commission is Cameron’s most recent work, and Jason Davies was brought in again as his artist mentor for the series of ten paintings. Before the Southbank Centre they were first shown in Glasgow as part of Glasgow International – a contemporary Arts Festival across the city. Cameron said that acrylic paint wouldn’t have been his first choice of medium as he tends to prefer oil pastels and watercolours, however, due to time constraints, he chose acrylic due to the speed in which it dries. Following Glasgow International, where the work was sized to fit the space, the work travelled to the exhibition space at Celf O Gwmpas in Wales. Due to Wales having pockets of quite isolated areas, two of the works were replicated onto a trailer and driven around Wales for one month. Photographs were taken along the way by the driver, who also had a cardboard cutout of Cameron to position into the photographs – a very novel idea!

Unlimited Festival travels to the Tramway in Glasgow after the Southbank Centre, however, because his paintings have already been seen recently in the city, Cameron has decided to create a new series of works documenting phones over the years in ceramics.  We were kept in suspense in the talk as to what these glazed works will look like, so I guess you’ll have to check our twitter account to see them when the show opens on 15 September 2016. Congratulations to Cameron on a funny and nostalgic series of works, and we look forward to seeing the ceramic phones in Glasgow!

TV Classics and Nama Ato: Japanese Outsider Art will be at Tramway in Glasgow as part  of Unlimited Festival from 15 to 25 September 2016.

*Project Ability is a Glasgow based visual arts organisation that creates opportunities for people with disabilities and mental health issues, to express themselves and achieve artistic excellence.